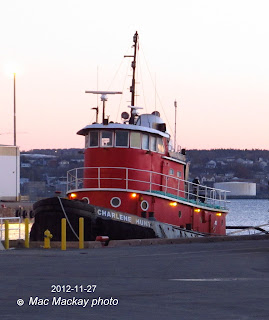 I have been informed that the US flag tug Charlene Hunt, which called in Halifax, in distress in November, has now been re-flagged to Bolivia. This welcoming flag state is "home" to the tug Craig Trans also in Halifax  in distress.
Charlene Hunt managed to get itself back into condition to sail to Newfoundland, complete with plywood over its windows and had other harrowing adventures on the way. It took more than a week to reach St.John's.
The tug has been lying there ever since, but is set to sail today towing the miniature cruise ship Lyubov Orlova .
The Yugoslavia built ship dates back to 1976, and was arrested in St.John's in September 2010 for debts to Canadian charterers. The owners walked away, leaving 49 Russian and 2 Ukranian crew unpaid. The crew had been depending on local charities for food, and were eventually repatriated with public assistance.
In January 2012 the ship was sold in Federal Court to an owner based in the British Virgin Islands.
The intention is to tow the ship to the Dominican Republic for scrap.
Update: The tug and tow left St.John's on Wednesday January 23. Their weather predicting cpabilities are being brought into question as a rare winter "super storm" is predicted fo rthe weekend.
' A historic extratropical storm is possible over the central North Atlantic on Saturday, the 26th of January based on the latest computer models. A weak 1014mb low will move off the Virginia and North Carolina coasts early Thursday moving rapidly east to northeast deepening to a 977 mb storm low by 12Z Friday, the 25th southeast of Cape race with winds to 50 knots. Thereafter, this low is forecast to “bomb out” as it moves northeast dropping 57 mb of pressure to 920 mb by 12Z Saturday, the 26th with hurricane force winds to 85 knots (nearly 100 mph) likely. ' Source Ocean Weather Services blog
Mac at 10:29 AM