The third tug to carry the name Salvanguard arrived this morning towing the Boabarge 36, after depositing the Deep Panuke topsides structure off Sable Island.
Although the owners have changed names three times since founding, they have kept the distinctive "Sal" prefix for their big tugs, hearkening back to the days when they were a Singapore based salvage company. 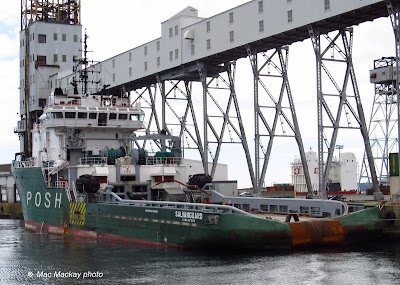 1. The current Salvanguard at rest at pier 25. The large open deck allows for anchor handling and offshore supply work. 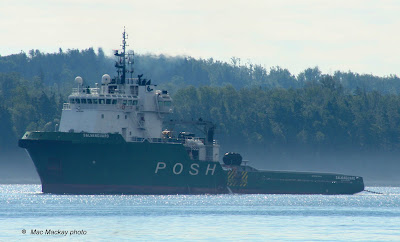 2. Salvanguard arrives this morning and slows to let go her tow.

3. Harbour tugs takeover the Boabarge 36 on a hazy moring.

The current Salvanguard, built for POSH Semco in 2004 is 13,5000 bhp multi-use tug with a massive 158 tons bollard pull. As with most of the new deep sea tugs these days it can do anchor handling and various other forms of offshore support work. In my opinion not as impressive a vessel as its predecessors, but it is nevertheless extraordinarily capable.
In the years since Selco and Semco and now as POSH Semco the company has concentrated on worldwide towing and offshore installations, with salvage work a minor part of their activities.
The first tug named Salvanguard was the former American (but Japanese built) Alice L. Moran a yacht like tug that had also carried the names Stateseman and Statesman I before Semco acquired it in 1978. It was sold in 1986 and renamed Amsterdam. Last reported it was in Dubai.
The second Salvanguard was equally impressive, the Japanese built Dahlia acquired in 1987. This 2699 gross ton tug built in 1978 was sold in 1998 and converted to the seismic research vessel Geobay. It was strictly a towing and salvage vessel and made some very significant tows in its career.

4. The impressive Salvanguard (ii) gets underway towing an oil rig from Halifax August 15, 1997.

2. Capt Ioannis S (now Ocean Delta) and Ocean Foxtrot assist in steering and Salvanguard does the puling as the tow sets out for Quebec City August 15, 1997. Photo taken from Chebucto Head, at the entrance the Halifax harbour.

3. Setting up the tow of Spirit of Columbus August 15, 1997. Chebucto Sea stands by at right. The rig was towed to Quebec City for conversion to the production rig Petrobas 36.
Salvanguard (ii) towed the oil rig Spirit of Columbus from Halifax August 15, 1997. Due to the size of the rig its thrusters and flare stack were removed in Halifax to reduce its water draft and air draft, so it could reach Quebec safely. The tugs Capt Ioannis S (now Ocean Delta) and Ocean Foxtrot assisted in the tow to provide additional steering particularly in the narrow sections of the St.Lawrence River and where power lines cross. That rig was converted to Petrobas 36, a Brazilian production platform. On March 20, 2001 the rig exploded and sank off Brazil with the loss of ten lives.
.
Posted by Mac at 6:33 PM