A recent circuit through Quebec, New Brunswick and Nova Scotia gave me a chance to see tugs in a variety of ports:

Quebec
Ile-aux-Coudres is the place to be to see tugs in the springtime. May 22 was no exception. At Industrie Océan, work is still proceeding on the new super tug Océan Taiga . Construction has been slowed due to lack of immediate demand for the 8,000 bhp, 100t BP ice class tug, but delivery is anticipated this year. 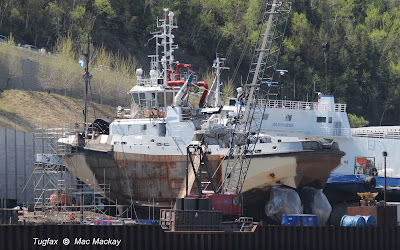 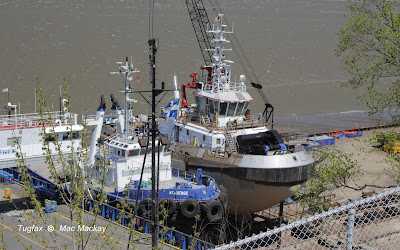 Its immense size is apparent when compared to its fleet mate Avantage. The 2160 bhp single screw tug, the former Belgian Sealion until 1977, was built in 1969, and is in for a refit. 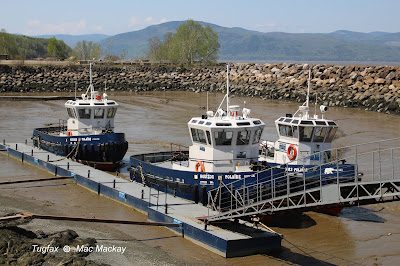 Rénard Polaire, Horizon Polaire and Ours Polaire rest in the mud at low tide.

Meanwhile in the marina three GFFM Leclerc tugs are already for work, with other members of the fleet dispersed to various areas on bareboat charters. 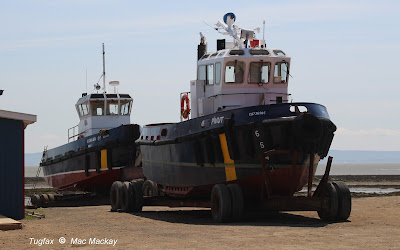 Lumaaq and Pivut are lined up for launch at the next high tide. 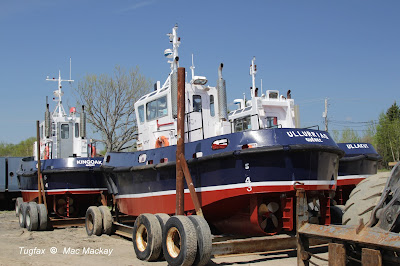 Kingoak, Ullurriaq and Ullakut will be next.
At Leclerc's yard at the foot of the island the Desgagnés lighterage tugs were all ready to go back in the water. They will be heading north as soon as Desgagnés' ships return from their winter work.


New Brunswick
It was a quiet Sunday morning May 29 in Saint John and most of Atlantic Towing's local fleet were at rest at their base, tied up Mediterranean fashion at their floating jetty. 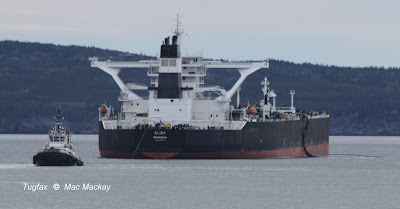 One tug was on duty at Canaport with the tanker Eliza at the monobuoy. Atlantic Cedar is a 5,050 bhp ASD built in 2005. It keeps a stern line on the tanker while it is offloading in strong tidal currents. 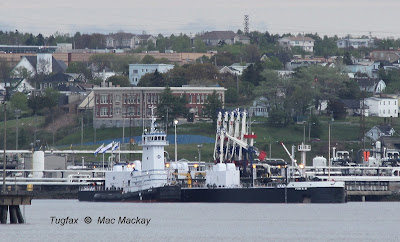 Coho is out of the notch of the barge Penn No.81 while loading at Irving Oil.

The US flag tug Coho was loading at Irving Oil for another trip to US ports. I had seen it two days earlier in Boston unloading its previous cargo. 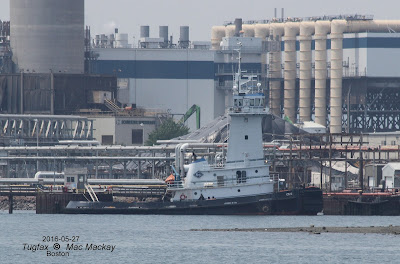 Coho was also out of the notch in Boston. Built in 2008, the 4,000 bhp tug has a single elevated wheelhouse 51 feet above the water. Original owners Penn Maritime sold out to Kirby Petroleum in 2012. It seems to be on a regular shuttle for Irving Oil.

Nova Scotia
At Comeau's Marine Railway in Meteghan, Lady Comeau was just finishing up a refit. A few days later it was in Meteghan River assisting in the launch of the new Halifax harbour ferry Viola Desmond. 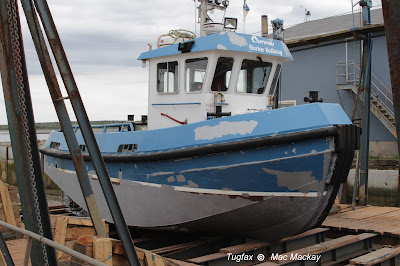 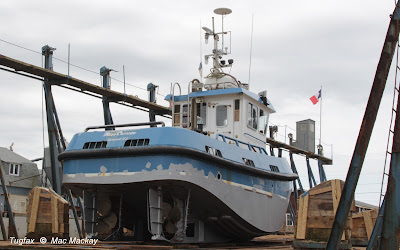 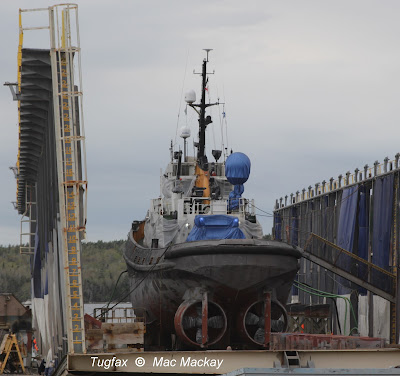 At Shelburne workers were taking advantage of a Sunday morning to blast the hull of the Atlantic Beech. The 1969 built, 2250 bhp tug is refitting before taking up its summer duties in Hudson Bay.  Fleet mate Atlantic Elm has completed a similar refit and is on its way to work. 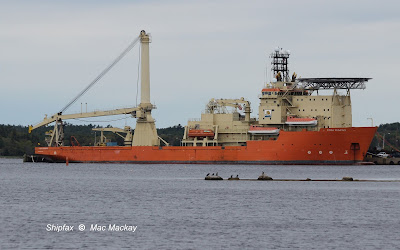 Although not a tug, the offshore crane and diving support vessel Toisa Pegasus is in long term layup at Shelburne, which may last a year. Suspicion is that the ship may be used to recover the lost drilling riser from Stena Icemax off Nova Scotia, but this has not been confirmed, 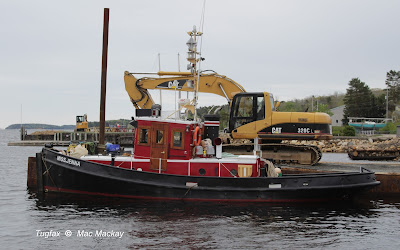 Miss Jenna is the former Hercules, Cavalier and originally, Listerville. 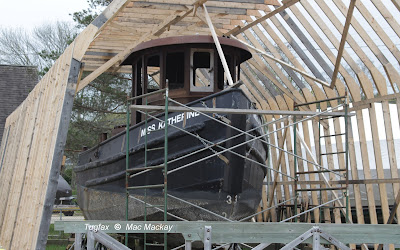 Miss Katherine was built in 1959 as the DPW tug Enmore. It was named T.A.2 until 2005.
It was also a quiet day in Mahone Bay where the ex RCN Ville class ''pup'' tug Miss Jenna was resting alongside. Her fleet mate Miss Katherine was peeking out of a shelter where it is still in the process of a rebuild. 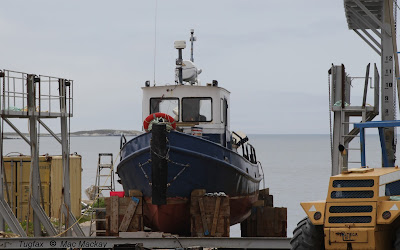 Plainsville puts on a happy face at the Canadian Maritime Engineering shipyard in Sambro.
Another ex navy ''pup'' was hauled out at Sambro June 4. Plainsville is operated by the shipyard itself to assist in drydocking and other work.