Northern Transportation Co Ltd, the huge Mackenzie River based tug and barge operator was placed in creditor protection in April. After years of losing money, the parent company could no longer support  NTCL and finally surrendered to the inevitable.
NTCL was allowed to complete many of its 2016 summer supply commitments, but when those were done the operation has been mothballed until it can be sold off in whole or in part.
The company's court appointed monitor identified some "non-core" assets that could be sold off piece meal without reducing the value of NTCLs base assets which include a slew of tugs and barges and support facilities. NTCL has been the principal, if not sole, provider of transportation services to scores of northern communities, and its loss would be a major blow to much of the Nunavut region.
The company has been a financial cripple for many years, and many of the vessels in its once mammoth fleet have been laid up and virtually abandoned. The monitor identified 158 vessels (tugs and barges) of which 77 are abandoned, out of class or scrap. Even this number may not identify all vessels, since there may be more in remote places that  have not been listed yet.
In an attempt to diversify its operations the company set up in Newfoundland and at various times had up to four tugs, a tanker and several barges working there. Sometimes they worked independently, but were also under charter to Atlantic Towing Ltd and others for extended periods. Some of those have now been sold as "non-core".

These include the two tug / suppliers Alex Gordon and Jim Kilabuk, the tug Keewatin and a dozen barges, some of which are in the eastern and western arctic.

Keewatin was last in Halifax in October 2015, but after that visit went back to Mount Carmel, NL where I believe it has been laid up ever since. 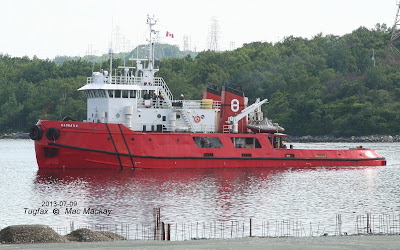 The 3375 bhp triple screw shallow draft tug was built in 1974. It was upgraded in 2011 to bring it back into compliance.

Jim Kilabuk was here in April 2015 while repositioning to Tuktoyaktuk in the western Arctic via the Panama Canal. It was reported to be operational in the summer of 2015, but was not used in 2016. 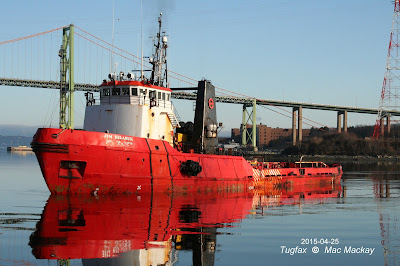 Built as Canmar Supplier IV in 1975, the 7200 bhp tug was renamed briefly Pernell J. in 1995 for its delivery trip via Panama to Halifax where is was refitted and renamed. It has worked back and forth from the east coast to the Beaufort Sea.

Alex Gordon has a similar history. Built in 1975 as Canmar Supplier III it was renamed Lamar J in 1995 for its delivery to Halifax and refit and renaming. 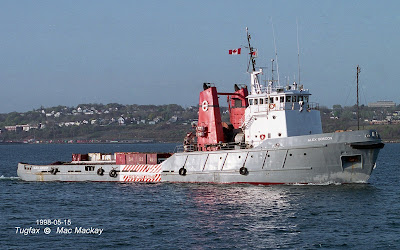 The tug was laid up in St.John's for a time, but was towed to Mount Carmel, NL in August 2015 by Keewatin. It has also been repainted red since I last saw it.

All three of these vessels have now been sold to RJG Construction of St.John's. That company is a civil, marine construction and dredging firm, and it is unclear what use it will be making of the tugs.


Also laid up in Mount Carmel is the tug Michael Amos. Built in 1984 as Arctic Nanabush for use in the Beaufort Sea it was sold in 1993 and operated as Britoil 7 until 2001, Seaways 4 until 2007 and Sea Biscuit I  until 2009. NTCL bought the 6400 bhp tug from layup in Dubai, and sailed it to Canada under Panama flag as Michael Amos. After hard years of foreign offshore work the cost to bring it up to a Canadian standard proved to be prohibitive and it is questionable if it will ever see use.

Among the many barges identified as "non-core" most have been sold to eastern Canada owners.
NT 1802, NT 1803, and NT 1804 have been sold to Les Barges de Matane Inc. An offshoot of Construction CEG Inc, the barges will be used to transport CEG's prefabricated buildings from Matane to the far north.
NT 803, NT 804, NT 1526 and NT 1801 are now owned by RJG Construction of St.John's.
NT 1511 was already on charter to Desgagnés Transarctick and has now been purchased.
NT 811,  NT 1509, NT 1524 and NT 1527 have been acquired by TMO Océan Inc. Only the first named is currently in Newfoundland - the rest are still in Nunavut.

It can be inferred from the posted documents, that a single owner may be planning to take over the re-usable assets and  resume service in 2017, but it is far from certain how that can be accomplished.

For those interested in NTCL's Companies' Creditors Arrangement Act process refer to:
http://www.pwc.com/ca/en/services/insolvency-assignments/ntcl.html