The Smit Boskalis tug Princess arrived this morning from Mulgrave, NS where it had delivered the Heerema barge H-591. 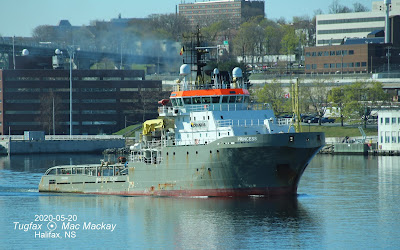 Built in 2002 by Yantai Raffles, the anchor handling tug/supplier is powered by a pair of 16 cylinder Wartsilas giving 16,500 bhp and 178 tonnes bollard pull.

Originally named Anglian Princess for Klynne tugs of England it was an early Emergency Towing Vessel (ETV) in the UK. In 2012 it went to Union de Remorquage et Sauvetage of Belgium as Union Princess. It still flies the Belgian flag as URS became part of Smit, then Boskalis.

The barge will be used as part of Heerema's removal of the Sable Offshore Energy Project structures using the crane rig Thialf.