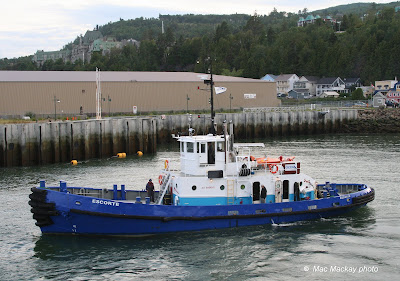 1. In the camber at Pointe-au-Pic with the Manoir Richelieu hotel in the background. 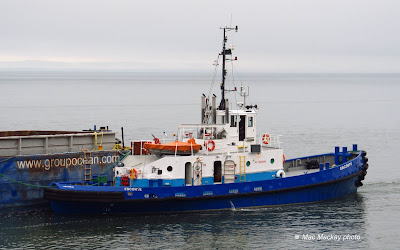 2. Operating stern first, she arrives at Cap-à-l'Aigle with a spoil scow. 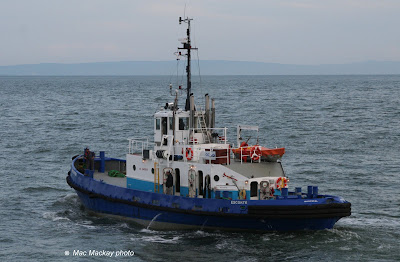 3. Removal of the orginal funnel improved visibility to the stern. 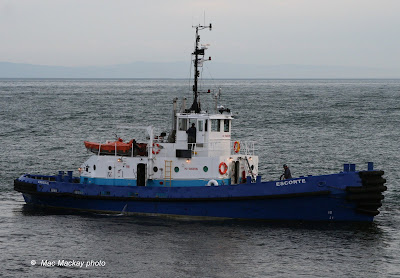 4. Escorte stands off Pointe-au-Pic at dusk, after a day's work.

Groupe Océan of Quebec City, has found work for its excellent small tug Escorte. After several years of service at their Hamilton, ON operation it was replaced this year by Océan Golf, and was reported to be for sale.
However I saw it in action this summer assisting the dredging fleet with some barge handling work. The tug was tasked with handling the barges Milne Inlet and Mary River to carry contaminated dredge spoil, which was then pumped ashore for treatment and disposal. This operation took place at both the Pointe-au-Pic, QC and Cap-à-l'Aigle, QC wharfs, in preparation for new wharf ownership and future development.
Escorte was built by Jakobson's Shipyard in Oyster Bay, NY in 1967 for the US Navy, as Menasha and was assigned the USN number 760. It and sister tug Mascouta, 761, now Atlantic Towing's Atlantic Aspen, were reported to be experimental, since they were were the first USN tugs built with Voith propulsion, and developed a modest 675 bhp. (There exists some confusion about the actual ancestry of the tugs, since the USN had YTBs or YTMs of the same name built at the same yard a few years earlier. This pair were definitely more like YTLs or YTSs, since they measure only 120 gross tons.)
After naval service they showed up on the United States section of the St.Lawrence Seaway in about 1989, still in USN colours. They were soon repainted in St.Lawrence Seaway Development Corp colours of black hull and green deck house, and did see service in the Snell-Eisenhower lock areas, and even with ship assist work at Cornwall, ON. Menasha was sold to John Fedek of Ogdensburg, NY in 1991. Vandalized and sunk in August 1992 it was raised by Donald Gordon of Courtwright, ON, who took possession of the vessel in payment. He operated the tug for a time out of Sarnia, repainting the deckhouse blue. He must have liked the name because he renamed his next acquisition Menasha (ex W.C.Harms-97, Ruby Casho-88, Hamilton-86, W.C.Harms-54, 132 gross tons, built 1949, 900 bhp)
In 1995 MTL Marine Tug Inc of Montreal (part of Three Rivers Boatmen) acquired the tug, and she was again repainted - this time with white deck house. Her plain black funnel acquired the red and white vertical bars of 3RB, and she was renamed Escorte, with "Tractor Tug" painted on her bulwarks.
After Groupe Océan took over 3RB, she worked out of Trois-Rivières for a time, then in 2002 was sent to Quebec City for a refit. There her funnel was removed and replaced by exposed exhaust pipes (improving visibility aft) and of was again repainted, this time in Groupe Océan colours of the day. Those have since changed, but the tug is essentially unaltered since then.
As with all Groupe Océan tugs, she is maintainred in spotless condition, and looks to be in excellent condition. Long may she run!
.
Posted by Mac at 10:33 PM