New Life in the old Vim 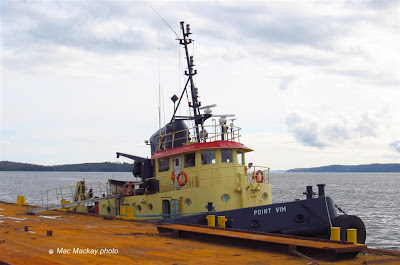 1. Point Vim at the IEL dock this afternoon. 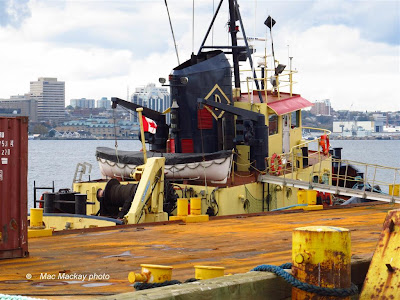 2. The tug now has a winch and a knuckleboom crane, and new wheelhouse doors. 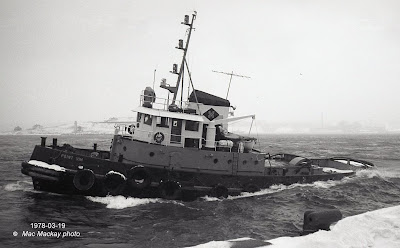 3. In its heyday in Halifax harbour the tug was called out in all weathers to berth ships, including this blustery Palm Sunday in 1978. Note the single radar and standard compass atop the wheelhouse, which was also fitted with wooden doors.

The once familiar Point Vim returned to Halifax for the first time in five years, showing off her new look.
Built in 1962 for the Foundation Company of Canada's towing operations as Foundation Vim, the tug worked all around Atlantic Canada before settling down to duties as a harbour tug in Port Hawksbury and Halifax. By that time Eastern Canada Towing had renamed her Point Vim (in 1974) and installed a fixed nozzle on her single open prop (in 1981.)
With the demand for more powerful tugs in Halifax, she was in reserve for several years until Svitzer Canada sold her in 2006 to Davis Shipping of Wesleyville, NF. Since then she has had numerous upgrades. The visible ones include a towing winch, a knuckle boom crane, and new watertight wheelhouse doors to replace the wooden relics that she was built with.
Still powered by her original 1,000 bhp Fairbanks Morse, she is going strong at 49 years of age.
The tug arrived towing the barge NT1032 with a load of metal fabrications from Bull Arm, NF. The cargo was unloaded this afternoon.
.
Posted by Mac at 7:25 PM