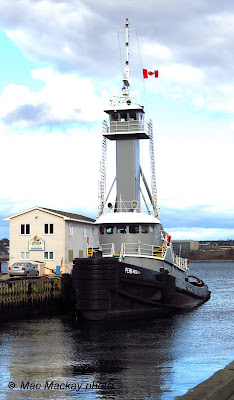 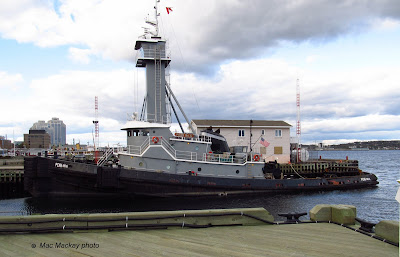 The big US flag tug Penn No.6 came over to Halifax from Imperial Oil and tied up at the Svitzer dock today. It is only when you get to see one of these tugs up close that you can appreciate how big they really are.
Penn No.6 was built in Slidell, LA by Southern Shipbuilding as Robert Alario in 1970. At 149' length overall and 35' breadth, the tug packs 5700 bhp delivered by two V-16 GMs. Morania Tanker Corp of New York bought the tug in 1992 and renamed it Morania No.6. Morania, founded in 1947, merged into Penn Maritime in 2000, but had shared common ownership since 1985. The tug changed its name as part of the merger and its colour too. Instead of the Morania red, it became Penn grey.
Penn moved its headquarters to Stamford, CT, but it maintains a base on Staten Island and also has an office in Slidell, LA.
Penn specializes in asphalt and heavy fuel transport, and has a fleet of a dozen tugs and barges. The barges are double hull, and the tugs are a mix of wire tow and articulated.
Penn No.6 is a wire tow tug, which can also push in the notch using face wires and has large pads to fit into the barge notch. Its massive tow winch and deck gear are typical of tugs of this size, built to handle very big barges.
See Halifax Shipping News for some excellent photos of the tug's arrival in Halifax towing Barge 120. The barge was built in 2002 and measures 7320 gross tons, 18,000 tons deadweight, and has a capacity of 115,000 bbls of black oil in six heated tanks. (All US units of measure)
Penn Maritime tugs are constant visitors to the Irving Oil refinery in Saint John and make calls in Halifax from time to time.
This evening it went back to Imperial Oil and picked up its barge, now fully loaded, and went out to anchor until the wind dies down.
.
Posted by Mac at 10:12 AM