The attractive French naval tug Malabar sailed form Halifax this morning after a courtesy visit over the weekend. Built in Hamburg by J. Oelkers and commissioned in 1973, it is one of three sisters to the same design, and classed as ATA , ocean tugs. With a bollard pulll of 60 tonnes and with 4,600 bhp, they would not be considered powerful by today's standards, but are certainly capable for naval towing. They are frequent visitors to St-Pierre et Miquelon where they carry out patrols. It can also carry out salavage and pollution control missions if needed.
All three tugs of the class, Malabar, Tenace and Centaure have called in Halifax over the years. Centuare was sold in 1999 to the Turkish navy and is now called Degirmendere.
As a new class of ocean tugs is expected soon for the French navy, so we we may be saying farewell with this visit. 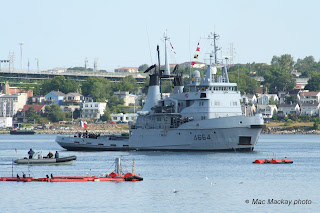 1. Malabar clears the force proteciton booms and heads for sea. The flag flying from the stern will be struck as it is flown only while the tug is in port.
Posted by Mac at 9:23 PM