The tug William J. Moore and tanker barge McCleary's Spirit have been laid up by their owners K-Sea Canada Corp, and the crew has been let go. First and foremost this is sad news for the crew, particularly when foreign flag tankers have been brought in on short term charters to work essentially the same trade.
Both tug and barge have interesting histories, well worth repeating. 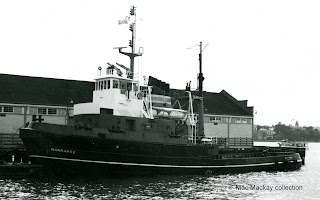 1. As built, Warrawee in Australian waters.

The tug was built by Adelaide Ship Construction Pty Ltd in Port Dover, South Australia in 1970 as Warawee for Adelaide Streamship Co. In 1975 it was sold to Seaspan Overseas Ltd but sent to work in the North Sea for Union Towing & Transportation Ltd from 1976 to 1988. It was then renamed Raider and came to Canada to work for Newfoundland Marine Energy Ltd in Come-by-Chance, Newfoundland. It briefly adopted the name Raider IV but then became Alice A. before the end of 1988. McKeil bought the Newfoundland Marine Energy fleet of three tugs (Bonnie B. III  and Carroll C II being the others) in 1999 but it wasn't until 2002 that the tug took its present name William J. Moore when it was paired with the barge. Two GM EMD main engines and a total of 4078 bhp drive twin controllable pitch screws. 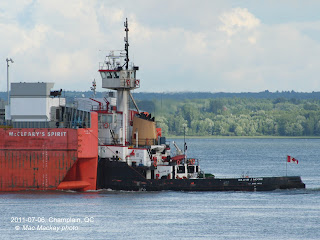 2. Tucked into the stern notch of the barge. The raised wheelhouse was added for this work.

3. Heading downstream for the Ultramar refinery to load.

The barge was built in 1969 as a coal barge Nieuwpoort in Temse, Belgium. In 1978 it became Gato da Mar and in 1984 L'Isle Sous le Vent and converted to a floating fish farm. McKeil bought the barge from layup in Falmouth, UK in 1999 and renamed it Le Vent with the tug Ocean Wrestler towing it to Canada. It was rebuilt to carry jet aviation fuel, and renamed McCleary's Spirit. It now measures 67,888 gross tons, with a cargo capacity of 13,385 tons.
In 2005 ownership passed to K-Sea Canada Corp with McKeil continuing to manage the pair and working under a charter to Pétro-Nav.

4. Heading back upstream a couple of days later, there is visibility from the lower wheelhouse,
but it is not being used. 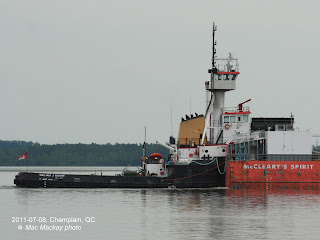 5. The tug's derrick was also removed and other modifications made to work with the barge.

What the future will bring for the pair is not known. Although neither is very new, they could be expected to last for some time in freshwater service. The combo has been listed for sale for some time, so perhaps a foreign buyer will be found.