Lois M picks up a tow

The McKeil Marine's tug Lois M arrived in Halifax June 8 to pick up a tow, and sailed this morning. 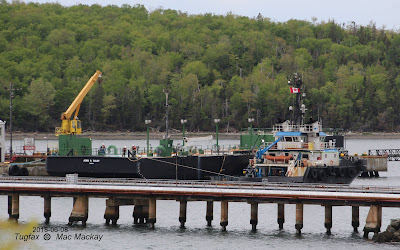 Lois M alongside its tow at the Valéro dock in Eastern Passage.

Built in 1991 by Matsuura Iron Shipbuilding (Tekko Zosen) in Higashino the 60 tonne BP tug is powered by two Niigata engines delivering 4800 bhp to ASD drives. It started life as Lambert for Robe River Mining Co in Australia, with Westug as operators. McKeil acquired the tug in 2014 and it traveled from Singapore 16,500 miles via Mauritius and Walvis Bay to Tampico. MX, delivering a pair of dump scows Marmac 250 and Marmac 251.  It then sailed light to Mulgrave, NS where the Redwise delivery crew handed it over to McKeil. The crew had entertained themselves on the long trip by making repairs and upgrades and painting.
It was registered in St. John's as Lois M September 23, 2014. 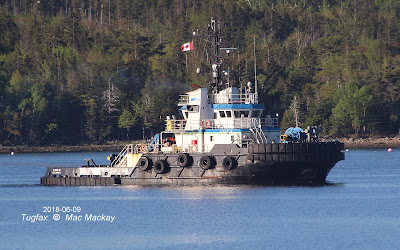 Leaving Eastern Passage this morning.
On this trip to Halifax it picked up the 1352 grt oil spill response barge John P.Oxley for a tow to North Sydney and drydocking. The barge was built by les chantiers Verreault, Méchins for Eastern Canada Response Corp and was delivered to Halifax in December 2001 by Océan Foxtrot. The only time it has left Halifax since then was in 2011 when it went for a refit in Shelburne, NS in tow of McKeil's Salvor.

With its tow on a short wire, Lois M is outbound past the Shearwater Yacht Club moorings.