Océan Taiga and other Groupe Océan news bits - plus Addenda

The "super tug" Océan Taiga put in a surprise appearance in Halifax today. The second of two tugs of the TundRA 3600 class built at Industrie Océan for parent company Groupe Océan, it is an 8,000 bhp, 110 tonne bollard pull Lloyd's Ice Class 1A Super F.S. What that means is that it and near sister tug Océan Tundra are the most powerful conventional tugs in eastern Canada, and that they could  work in the high arctic, year round without icebreaker assistance. 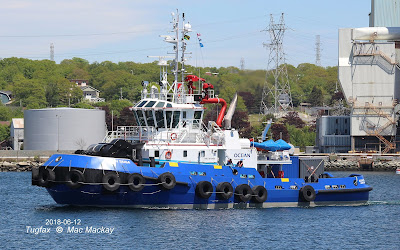 The two were envisioned to serve the Baffinland Iron mine but as things turned out that project was delayed, and development plans changed, and so the tugs were not needed - at least on the original schedule.


Océan Tundra was completed in 2013 and construction of Océan Taiga was intentionally slowed down and it was not completed until 2016. Although there is some tanker escort work on the St.Lawrence where their 14 knot free running speed might be of use, there is little demand for tugs of their power and capability in the area. 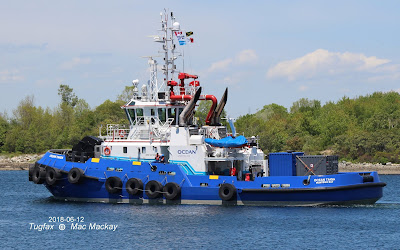 Océan Taiga has a pair of small containers lashed down on deck.

That is why Océan Taiga is arriving in Halifax. It has been chartered out bareboat to undisclosed owners, who apparently need the tugs power, but not likely its arctic capabilities. The tug is flying the Jamaica flag.

Addendum #1: Océan decided to announce - after I made this post- that they had signed a ten year contract for three tugs for Kingston, Jamaica, in the New Port West section of the harbour. The contract is to start the end of June. The press release does not name the tugs. It also mentions "personnell" will also be sent, but that 40 jobs will be created locally in Jamaica. It also states that the contract is with the Port of Kingston.
Had I known all this before the tug arrived in Halifax I would have reported it.
All I had to go on was The Department of Transport web site, which says that the tug Océan Taiga is bareboat chartered out. It has certainly been reflagged to Jamaica, and therefore I stand by my previous statement that the tug(s) are chartered to an unknown Jamaican entity. According to other sources this is "Ocean J Towing Ltd".  The tug remains owned by Océan Remorquage Québec Inc.

The same* Jamaican owners of the Hercule, formerly Océan Hercule completed delivery of their tug last month. However there has been no movement on Océan Delta, believed to be bought by the same owners, and still lying in Sorel-tracy, QC.

*Addendum #2: The listed owner of the Hercule is West Indies Petroleum Ltd, as previously reported, with managers listed as "Blue Ocean Marine Ltd". Do you detect a similarity?


After acquiring the Cargill owned, Svitzer-managed Pointe Comeau, Océan has renamed it Océan Comeau. It has now left for Quebec City as its replacement has gone to work in the port of Baie-Comeau. That tug, the former Océan Cartier has been renamed l'Anse du Moulin [translated: mill cove] and ownership transferred to Cargill Limited. Océan Remorquage Baie-Comeau Inc manages the tug for Cargill.

Océan Stevns is bareboat chartered out under St.Vincent and the Grenadines flag. It spent the winter in Port Hawksbury, then sailed for St.John's, NL at the end of May. Its intentions are something of a mystery.