Penn Maritime's articulated tug/barge Coho/Penn 92 put in at the McAsaphalt dock (formerly known as Dook's dock) in Eastern Passage today to off load asphalt.
The tug/barge are constant visitors in Saint John, running from Irving Oil to US east coast ports. Penn Maritime (formerly Morania) are specialists in carrying asphalt and have built up a sizable fleet of tugs and double hulled, heated barges.
This trip to Halifax is under a coasting license, granted by the Minister of Public Safety, since no Canadian vessels were available. It allows the tug/barge to deliver 80,000 bbls of asphalt to various (unnamed) eastern ports for Irving Oil, between June 14 and July 14.
The tug Coho, built in 2008 is powered by two 2,000 bhp Cummins engines  driving twin screws in Nautican nozzles and is fitted with a JAK 400 coupling system to connect to the barge. The barge measures 15,225 deadweight tons (US measure).
Coho is built to work form the notch at all times but is fitted with an emergency towing system. It has an elevated wheelhouse, with height of eye 51.5 feet above the water line. Unlike early articulated tugs, it does not have a lower wheelhouse.
Once alongside at McAspahlt, the tug uncoupled from the barge and lay alongside. It is fairly rare for the tug to do this, but the dock is relatively short and would present challenges to secure the tug while in the notch.
I was therefore disappointed not to get a better photo. 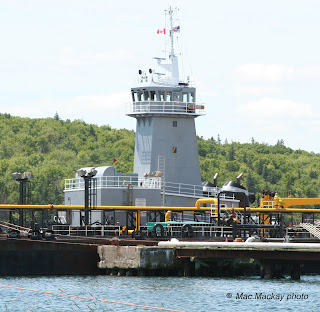 McAsphalt's two articulated tug/barge combinations are busy running on the Great Lakes/ St.Lawrence. They generally run from the Detroit area to Montreal, but do work farther afield as well.
Posted by Mac at 10:16 PM