The unusual looking Ship Docking Module, a type of tug patented by Seabulk International and designed by the Elliott Bay Design group from a concept by Eric Hvide (founder of the predecessor of Seabulk) was once to be seen only in Florida, where Seabulk operates. In 2004 however Remolques Y Servicios Maritimos SL (Reyser) of Barcelona, Spain was licensed to to produce five of the SDMs to be built in Spain. 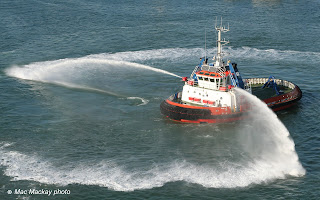 Originally built for Hvide  by Halter Marine in Louisiana, the first three SDMs were simple 3 man day boats, of short (90 feet) and wide (50 ft) dimensions. The shallow hulls were fitted with skegs fore and aft and an azimuthing thruster fore and aft, one offset to each side of the centre line so that they would not be in line with each other.


2. St.Johns is the second SDM built. It and the first unit, New River were powered by two Cat engines giving just over 4,000 bhp. The were delivered in 1997 and 1998. They are now both based in Port Everglades, FL. Here the tug is tucked under the bow of a ship, which it is able to do thanks to its width and large clear working deck.
3. The "business" end, or stern of the St.Johns shows the small size of the deck house and wheelhouse. This was a major cost saving compared to a full crew tractor tug such as fleet made Condor. Screens in the funnels were intended to provide visibility, but did not work well.

4. The third Mark I SDM is Escambia. also with 4,000 bhp and Cat engines, it is still based in Tampa/ Port Manatee, FL. This is the bow end of the tug. The winch is amidships and the tug can only work over the stern.

After the first three were built in 1998-1999, another three were ordered. Called Mark II SDMs, they had slightly larger accommodation and other improvements based on operational experience. At the same time Hvide ran into financial difficulty, and could not take delivery of all three tugs when they were completed in 2000. The company was re-organized as Seabulk International and Seabulk Towing.


5. Suwanee River was delivered to Hvide in 2000. As with all the Mark IIs it is powered by Warstsila main engines.  It is also based in Tampa for Seabulk Towing. The large staple mounted right aft allows the ship to pull from close in. It can shift to push very quickly by lying up alongside the ship or shortening up.

In Tampa, former managers of Hvide's harbour operations started their own company and ended up buying the remaining two SDMs from the builders. These people had been heavily involved in the development and operation of the SDMs and believed in their merits.

6. Tug Florida was delivered to Marine Towing of Tampa. It was subsequently sold to Seabulk, renamed Mobile Point and transferred to Mobile, AB. Here it is shown alongside where it can push or pull from the same position. The tug's great width and thrusters on each end make this possible.

7. The sixth and last US built SDM was Endeavor, also delivered to Marine Towing of Tampa. It is still in service in that port. The tug is proceeding stern first, which it is able to do as easily as bow first. Sometimes it is easier to move in this mode to enter narrow slipways. Note the cutouts in the mid sections of the funnels to improve visibility from the helm position.

Since then the dust has settled somewhat. Seabulk has moved the tugs around, now with two working in Tampa, two in Port Everglades and one in Mobile.
Marine Towing of Tampa (now part of the Steinbrenner company) sold one of the SDMs to Seabulk, but continue to operate their one SDM in Tampa.
As for Reyser (if the name is familiar, it is because they are partners with Atlantic Towing in ownership of three LNG terminal tugs in Saint John, NB) operate three SDMs in Barcelona and one in El Ferrol and one in Santander, Spain.
The chief advantage of the SDM is its ability to work in tight spaces, to crab sideways, to get under the flare of large ships and its relatively low cost compared to some other types of tugs.
There may always be a limited market for SDMs, but where they are used they seem to work well. The only criticism I have heard from operators was that the accommodation is very limited. One skipper said that it had been years since he had to leave the wheelhouse and go out and deck to reach the head. There is also the issue of visibility due to the placement of the funnels. However the tug's ability to "flop" around on its own length and change from pull to push is a definite asset where narrow spaces do not permit a perpendicular hook up required by the usual ASD or tractor tugs. 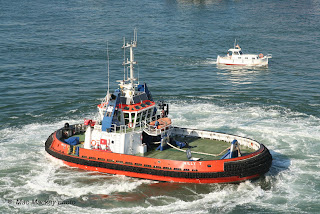 8. Willy-T spins around in its own length. 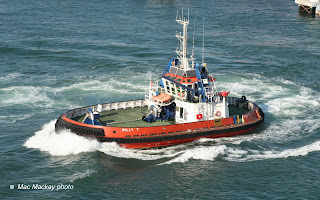 9. The tug has just done a crash stop and reversed, reaching full speed in a remarkably short distance.