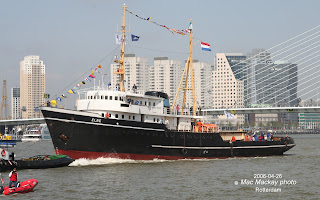 Restoration was not complete, but the tug was looking pretty good in Rotterdam in 2006. It was repainted to the traditional Smit black and white livery.

I was pleased to learn last month that restoration of the tug Elbe has been completed in the Netherlands. It is not often that we hear of success in these kinds of ventures, they usually run out of funds, and this one was not without its challenges. Nevertheless the ship is now back in prime condition.
Built in 1959 the 3160 bhp tug worked for Smit International until 1977 when it was sold. It was so highly thought of as a seakeeping vessel, that the Association of Maryland Pilots purchased the ship and converted it to a station keeping pilot vessel and renamed it Maryland. In 1985 it became Greenpeace (after a brief period called Gondwana, to conceal its ownership). It is partly thanks to the latter organization that the tug is still with us today, as they extended its life for many years.
The tug does have a connection to Halifax. In January 1965 it towed two ships from Halifax to Bilbao, Spain for scrap. These were the Canadian Observer and Canadian Highlander, two former members of the Canadian National Steamship fleet, that had been idled in Halifax for several years. Not only was this a tandem tow across the Atlantic in mid-winter, both ships had riding crews aboard. They left Halifax January 7 and arrived in Bilbao January 27, a remarkably quick crossing under the circumstances.
In 1969 Elbe towed the damaged Canadian destroyer HMCS Kootenay (DDE 258) back to Halifax after a fatal explosion aboard the ship in the English Channel. The explosion took place October 23, 1969, and HMCS Saguenay and RFA Samsonia (ex Foundation Josephine) were able to tow the ship into Plymouth. Elbe and Kootenay arrived in Halifax November 29, 1969. 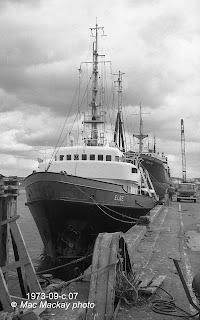 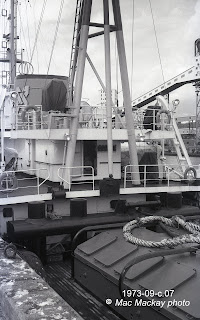 Elbe was back in Halifax in 1973 when it towed the burned out Baffin Bay to Valencia, Spain for scrapping. The tow left Halifax September 8, and arrived in Valencia October 4. 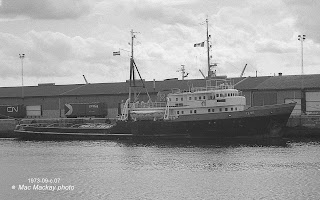 Elbe at pier 30 making ready for its last tow from Halifax. By this time Smit had adopted a multi-hued colour scheme, and the now famous "shackel" funnel mark.
Posted by Mac at 7:00 PM