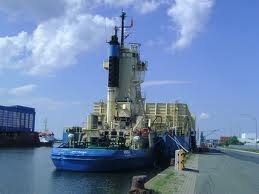 Groupe Océan of Quebec has made a jump into the Articulated Tug and Barge world with the acquisition of the tug Mega (ex Aatos-93, ex Teuvo-85) and the bulk dry cargo barge Motti (5,195 gross tons 1993).
Built in 1975 by OY Wartsila in Finland, the tug is powered by four engines through diesel electric drive driving twin screws. Power is listed as 3,967 kW (about 6,000 BHP). The tug was rebuilt in 1993 and paired with the barge. The conversion consisted of elevating the wheelhouse and fitting the coupler system.

Why diesel electric you may ask, but when you think of Wartsila you usually think of icebreakers. Although Lloyd's does not show the tug as ice rated, photos on Marine Traffic do show it in loose ice in the Kiel Canal.
See those photos here:
http://www.marinetraffic.com/ais/shipdetails.aspx?mmsi=-7347641

For several years Océan has been operating the tug Ocean Echo II and barge Betsiamites carrying pulpwood and wood chips. They also operate as an ATB (Articulated Tub/Barge.)

P.S. (2012-12-19)
More details have emerged about the Mega + Motti pair. They are indeed ice rated, in fact at SF 1A super (Swedish Finnish class) and this is a high rating for Baltic winter navigation. There are hundreds of images on the net, and from them you will see a sort of add-on stem on the barge, but not seen are bilge keels, which allow it to work offshore. There are photos showing the barge carrying large steel fabrications -its decks are reinforced for heavy loads. A side ramp is rated for 85 tonnes, and it has carried 28,000 cu.m. of wood. The pair are connected by Articouple system, and the barge its own independent generator to run windlass, lights and other systems.
They have been laid up in Bremerhaven since July of 2012,. Spec sheets on tug and barge may be found on www.breise.de