Craig Trans - lights on, no one home 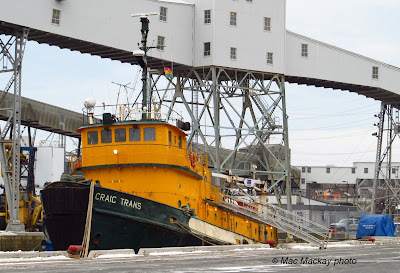 After the repatriation of the tug's crew. through the generosity of the public, there was a little activity on the tug last week. A welding machine was parked on the pier and there was a watchman also. Since then the tug has taken a bit of a list to starboard. Now the gates to pier 24 are closed at both ends and there is no sign of any activity on board.
There are still lights on, indicating that a generator must be running, but there is no sign of other life. I hear that the owner is arranging for another crew, and hopes to resume his trip to Beauharnois, QC as soon as the Seaway opens in March.
With the ongoing Lyubov Orlova / Charlene Hunt situation in Newfoundland, I wonder if that will be allowed to happen? The ship is still adrift and the tug remains tied up in port, but there doesn't seem to be any resolution in the offing.
http://www.ctvnews.ca/canada/empty-cruise-ship-drifting-off-newfoundland-raises-alarms-1.1132103