Irving Maple - from the archives

From time to time when there is nothing much happening on the current tug scene I will  be dipping into the archives for a favourite tug.

One of my all time favourites is of course Irving Maple. Built in 1966 by Saint John Shipbuilding + Dry Dock Ltd [hull number 1063] she was the first ocean going tug built for Atlantic Towing Ltd (they always had second hand before this time).

2. The original funnel had a light blue cap, which became black with time. It was a nice touch, but proved impractical.

Built to Ice class 1 she was 125 ft loa x 32'-4" breadth x 15' draft,  and powered with a single 8 cylinder Nydqvist + Holm (now known as Nohab Polar) of 3200 bhp driving a single CPP in a nozzle.
She was a fine sea boat, and worked all over the east coast of Canada, US, the arctic and transatlantic with tows, and on salvage jobs. Her achievements are too numerous to mention (wait for the book) but between heroics she towed Irving Oil barges to numerous terminals and power plants. The barges had only shallow notches, so she was made up with face wires when in harbours or calm waters, but resorted to towing when at sea. 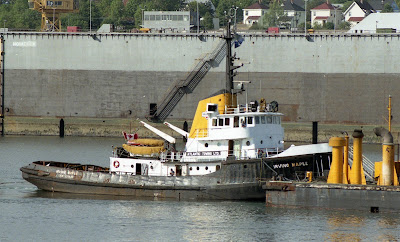 3. Made up to push, she is directing a barge toward the Nova Scotia Power plant at Tuft's Cove in Halifax harbour.

In 1996 Atlantic Towing Ltd started to re-brand all their tugs with the prefix Atlantic and so she became Atlantic Maple, but I still think of her in her original form. In later years work was found in the Caribbean, but as time went by there was less and less and she was finally laid up early in 2003.

4. As Atlantic Towing Ltd began to re-brand, the tug lost the Irving logo on the funnel, and the painter ran out of room for the new name on the bow, and hadn't got to the stern yet. Speaking of which, when she was towing or even moving with a little speed, she squatted a bit by the stern and looked good. Otherwise her stern had a bit too much lift for my liking.


5. Among her regular tows was the Kent Line paper barge Kent Transport.

Shipbrokers Marcon International have been listing her for years now "as is where is" in Saint John with stated deficiencies including gen sets and stack insulation to be replaced. There is also a non-compete condition for the east coast of Canada, the US and the Arctic.
With no apparent takers I wonder how long she will be around.


6. Not writing her obit yet - that's not why there is a black frame - she showed off well while in refit at the Steel +Engine Products Ltd (Stenpro) slip in Liverpool - and just fit into the fixed 50mm lens. Note she has no rolling chocks due to her ice class.
Posted by Mac at 10:08 PM