I was back at Ile-aux-Coudres over the weekend and got a different slant on my previous post a couple of weeks ago.

At Industrie Océan, the two tugs Océan Echo II and Océan Basques remain on the slips. Since it was the weekend there was little activity in the yard, but I did get photos from the road above the yard. 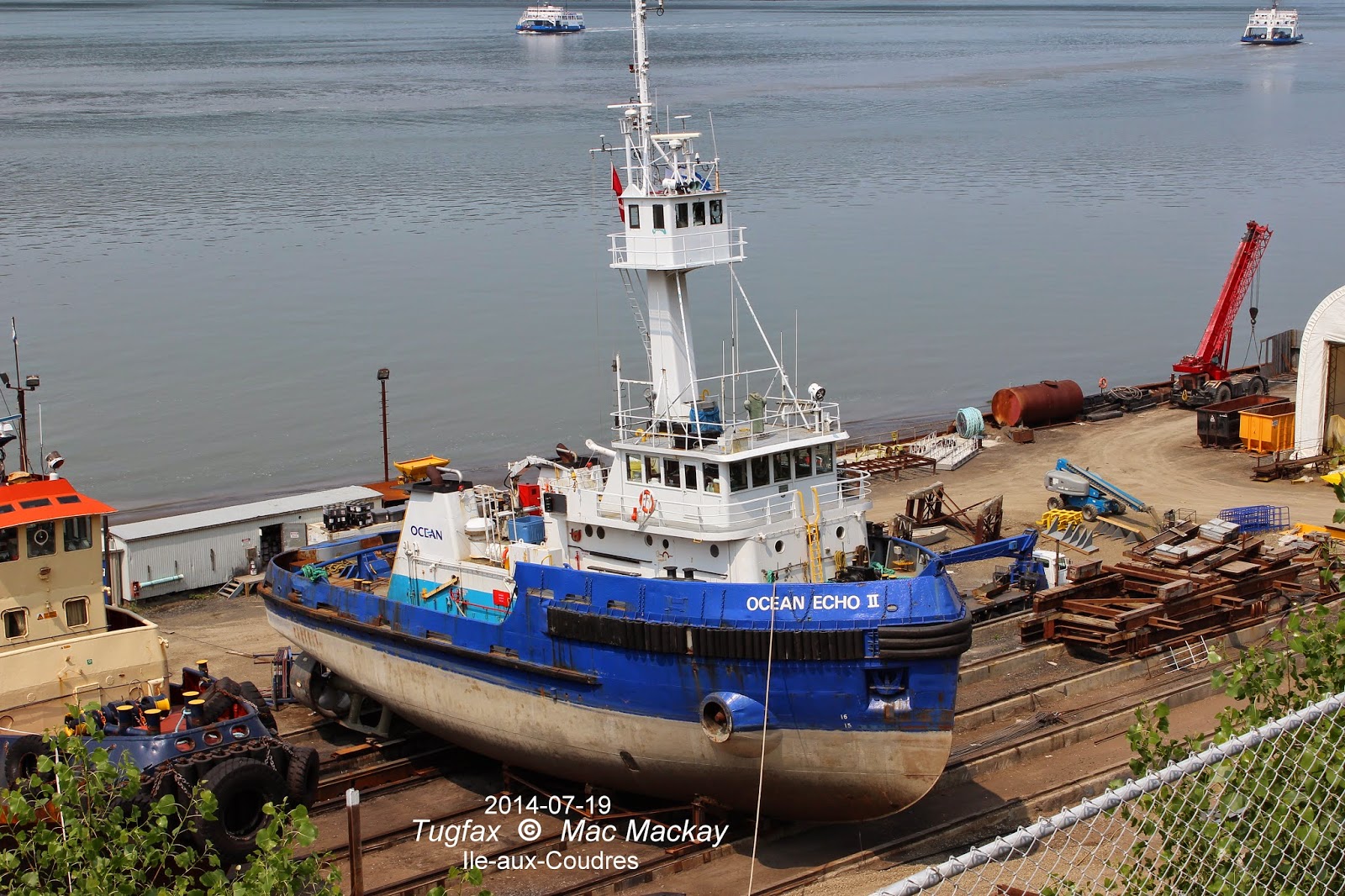 From this angle the housing for the hydraulic ram is visible. These devices were added to the tug after it was acquired by Groupe Océan in 1996. It had been used face wires for its barges when built. 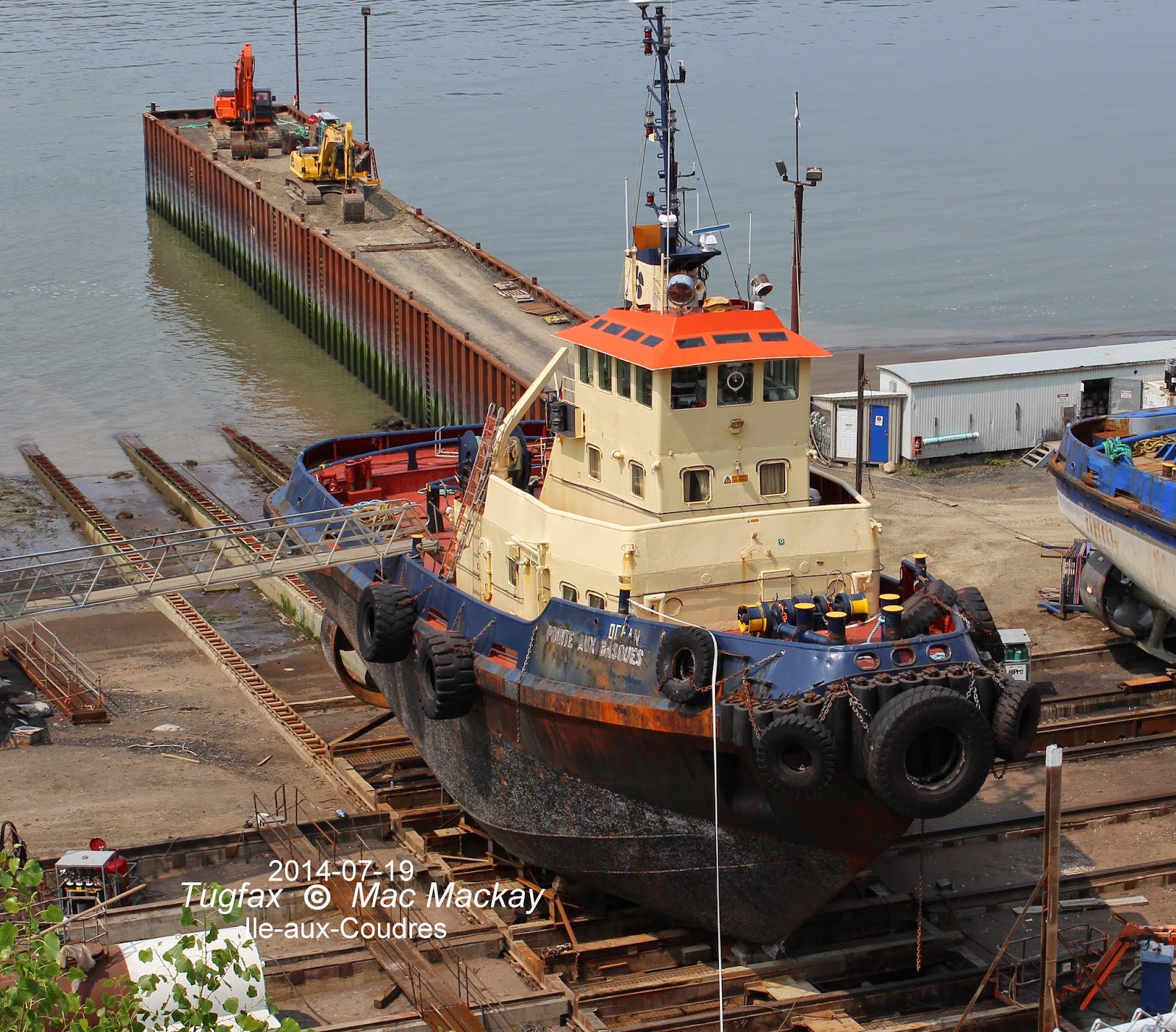 By comparison, the cut away icebreaking bow of Océan Basque is highly visible. The letters from the tug's original name Pointe aux Basques have been ground off to make way for its current name.


Meanwhile tug builders GFFM Leclerc were preparing to launch their latest boat. To be named Réjeanne Polaire, it is the latest in a line of small tugs, used mostly for barge handling in the north. Unfortunately it was still inside the builder's shed and not visible yet.

The design for the tugs has evolved from twin screw to triple screw, in order to maintain shallow draft, but increase power from 600 bhp to the current 1130 bhp. Ours Polaire, built in 1998, was the first in the series of powerful small shallow draft tugs. 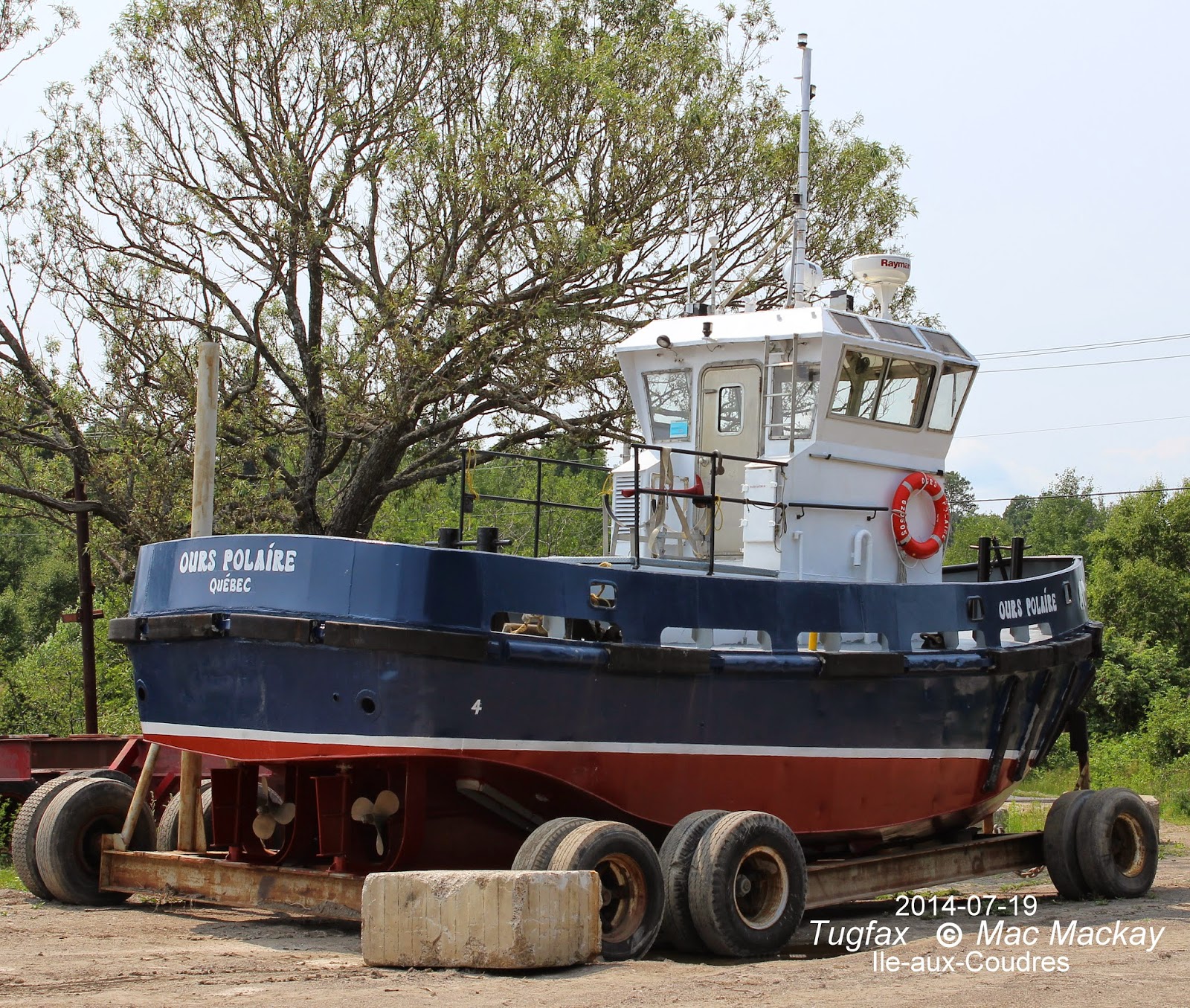 A twin screw boat, it features a small wheelhouse with all round visibility. It has not entered service this year. 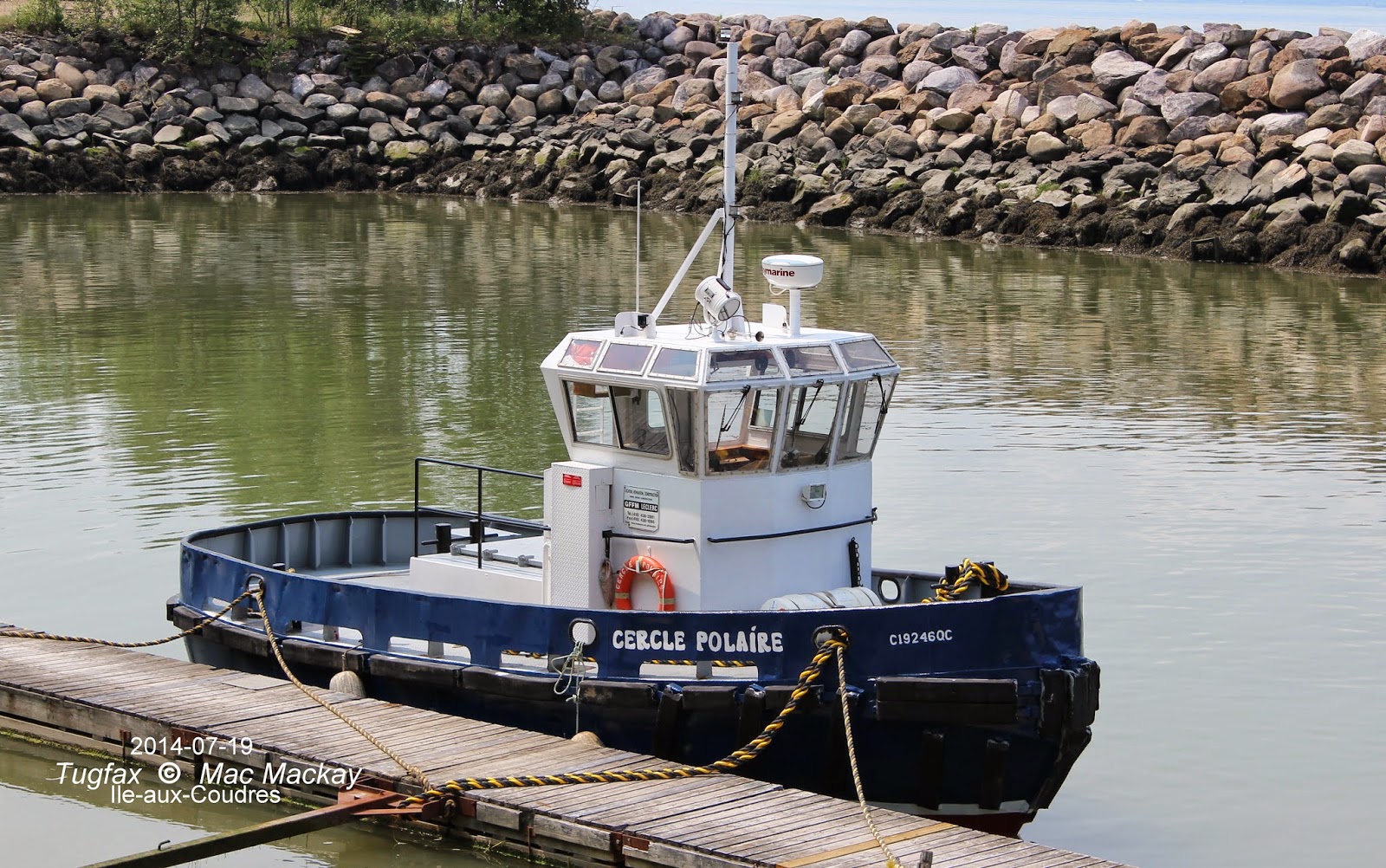 The hull is heavily fendered for handling small lighters.Cercle Polaire, built in 2011 was the 7th and last of the first series of tugs.

The design has evolved to the present tripe screw version: 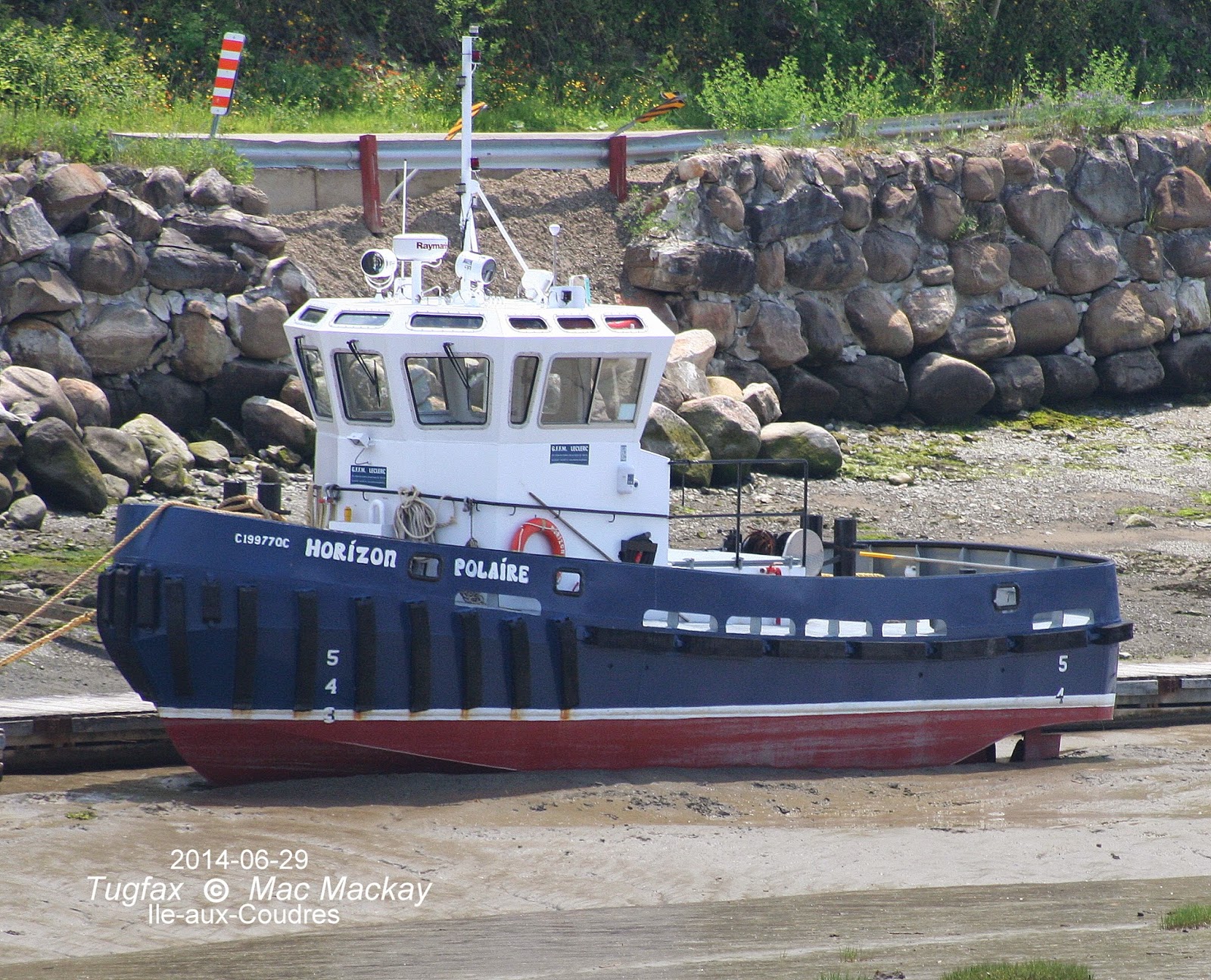 The latest generation are still shallow draft, but have a larger all weather wheelhouse. Horizon Polaire , built in 2012 is the first of the triple screw series, which now numbers 4 tugs. 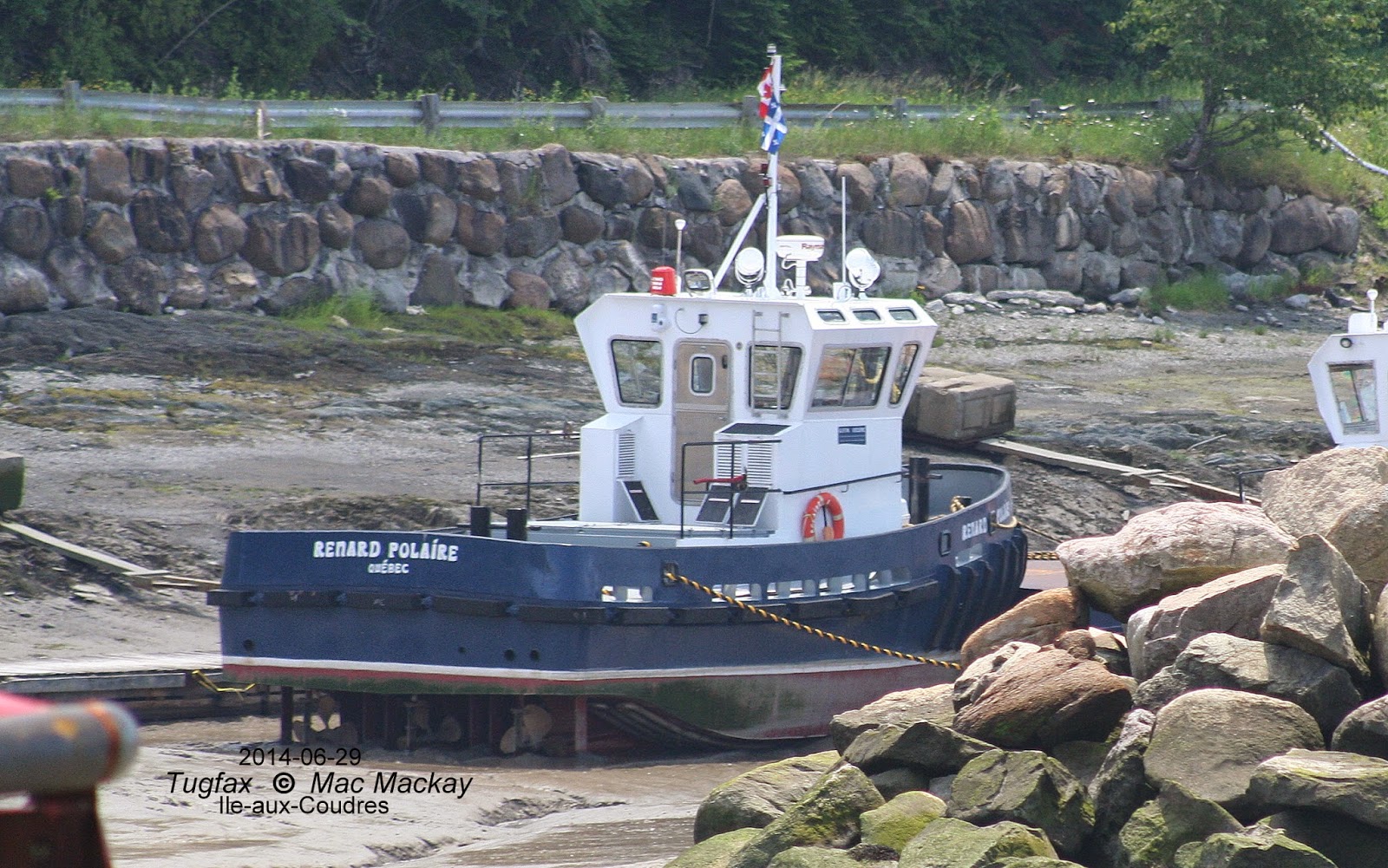 With three engines and three props, the operator has a range of choices for propulsion, using one, two or all three Cummins engines. Renard Polaire was built in 2013.

The tugs are lifted aboard supply ships and taken to remote sites in the north where there are no port facilities. They then ferry the lightering scows to shore. They are also available for bareboat charter and have worked various jobs in southern waters.