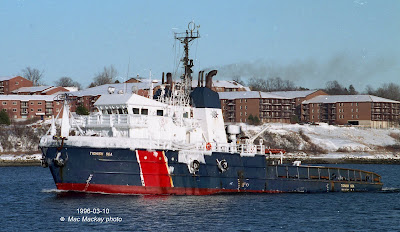 1. Coated with frozen spray Tignish Sea works her way to pier 9 in March 1996. 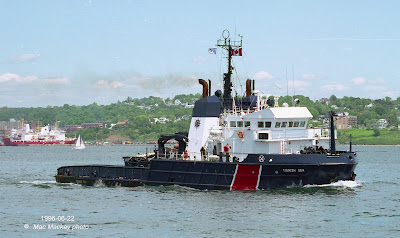 2. In much warmer conditions, the tug dips her bow into a swell off pier 27. 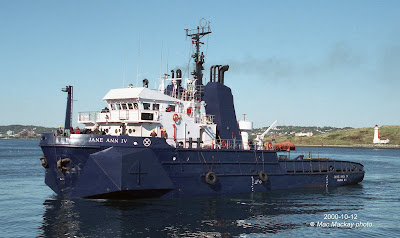 3. Jane Ann IV returns to berth from a trial trip for her new owners. The hull fairings are complete, but the rams are yet to be installed.

One of the little known sea rescues of the north Atlantic took place in January-February 1996, and a Halifax tug with an interesting history played a major part in saving the ship.
The Greek bulker Amphion began taking water in bad weather 450 miles SE of St.John’s on January 10, 1996. En route from Brake, Germany to Philadelphia, the ship had encountered heavy weather and suffered several hull fractures.
The CCGS Leonard J. Cowley responded and evacuated all 23 crew the next day using an inflatable boat, making several trips in very dangerous conditions.
Secunda Marine Services of Halifax hired a plane to keep track of the ship, and when it appeared that the Amphion would remain afloat, they secured a Lloyd’s Open Form "No Cure, No Pay" contract with the owners.
Secunda scrambled their tug Tignish Sea, which was idle in Halifax, loading pumps and extra gear. It took five days to reach the ship and four more to secure a tow line. A riding crew was put aboard Amphion and a quick survey revealed surprisingly little water on the ship. After refilling the ship’s day tank they were able to re-start its generators and pumps, and the tow began on January 20. Through snow storms, freezing spay, high seas and high winds it took until February 3 to reach Halifax, where the ship was tied up for repairs. It was able to continue its trip to Philadelphia February 22.
Amphion was built as Domina by China Shipbuilding Corp of Taiwan in 1978 and had carried the name Frinton from 1986 to 1993. Cold weather (brittle steel) hull fractures were all too common, and many ships had been lost due to this cause. The ship had been saved only temporarily, for later in the year it struck another ship and grounded in Bhavnagar Roads. It was then sold to shipbreakers and beached in Alang, India August 16, 1996 where it was scrapped.
The tug Tignish Sea started life also in 1978, but at Mitsui Eng & SB in Japan as Ouro Fino for Petroleo Brasilero. It was renamed Bonace in 1981. With a sister tug, it was acquired by Secunda Marine Services in 1992 and arrived in Halifax May 9, 1993 towing Cavendish Sea.
A small, but very powerful vessel of 8,000 bhp it could carry a limited amount of deck cargo, but was primarily a towing vessel. The tug participated in several salvage jobs including refloating Winter Star in Sydney and bringing Talisman into Halifax, but it was mostly used for offshore oil work. When that work began to dry up, it was sold in 2000 to Great Lakes Transport Ltd of Halifax.
That company had acquired the self-unloader barge Sarah Spencer, which was to be used for carrying grain, and they needed a tug for pushing it.
In June 2000, Tignish Sea went under the knife for major surgery. Two giant rams were to be installed in new housings on the tug’s bows, which would connect the barge to the tug to make a semi-rigid connection . By October the tug, renamed Jane Ann IV, sailed from Halifax for Windsor, ON to pick up the barge and to have the rams installed. That installation took place at Bay Shipbuilding in Green Bay, WI and was completed November 15, 2000.
The tug/barge combo has met with mixed success on the Lakes due to the economic downturn, and was sold in 2005-06 and has been laid up for the last two years. It is listed for sale on the Marcon shipbrokers site. http://www.marcon.com/
.
Posted by Mac at 10:29 AM