McKeil Work Boats Ltd of Hamilton, ON have purchased the tug Point Halifax from Svitzer Canada Ltd. Once the backbone of Halifax harbour tug operations, and the first azimuthing stern drive tug on the east coast, it has obviously reached a certain age, and no longer suits Svitzer's needs.
Designed by EYE (Evans Yeatman Endal) of Halifax and built by McTay Marine of Bromborough, UK, the tug was delivered to Halifax in 1985 after a lengthy trials period in the UK, during which some modifications were made. It arrived in Halifax after a very rough crossing of the Atlantic, on December 21, 1986 and early in 1987 was in service. At 4,200 bhp it more than doubled the horsepower of any of its owner's Halifax tugs. Here is a retrospective look at the tug over its twenty-four years of service in Halifax. 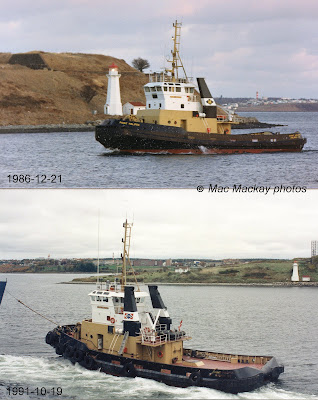 Designed to work over the bow in ship berthing, it was also fitted with a towing winch, which saw little use in its early years. It also had an open working deck aft to carry offshore supply containers (which it did once to my knowledge) and a stern roller for anchor handling (which it never did to my knowledge). When it was delivered Eastern Canada Towing Ltd was a subsidiary of Smit and Cory International. When Smit bowed out, the funnel marking changed to one derived from the Cory parent, but with the word ECTUG on the blue diamond. 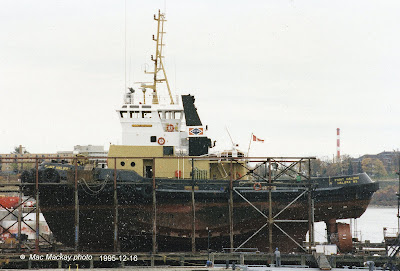 Not well regarded as a sea boat, it did some outside work, but was kept busy in Halifax until delivery of newer tugs freed it up somewhat. 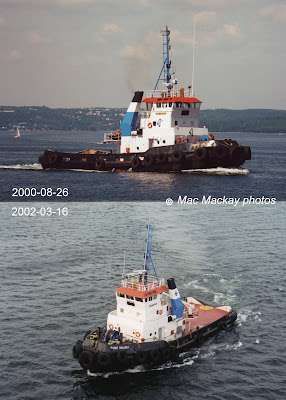 When Wijsmuller acquired Cory there was a short interval when the tug carried Wijsmuller's logo, but this was soon displaced when Svitzer bought out Wijsmuller. A gradual change over to a new colour scheme started with the Svitzer cross on the funnel. 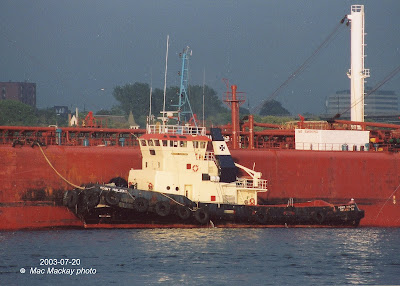 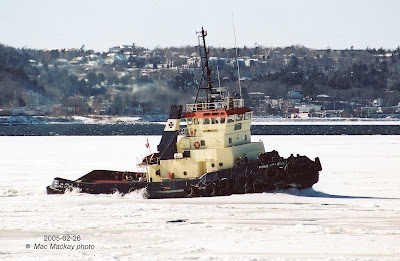 Under Svitzer ownership and delivery of another new tug, Point Halifax was freed up to work more outside. It was then sent to work in the Freeport, Bahamas one winter and on northern supply barge towing in the summer to Hudson's Bay. Svitzer ended up adopting a propeller logo on the funnel. 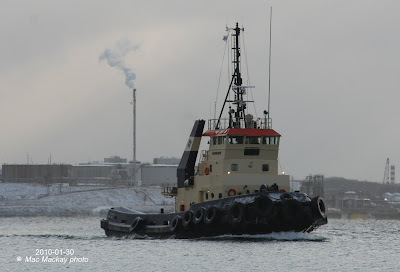 When Svitzer Canada transferred its tugs to the Strait of Canso under its joint venture with Atlantic Towing Ltd, the Point Halifax was still undergoing costly repairs to its stern drives following a grounding in the Strait of Belle Isle. It was chartered to Atlantic Towing for barge work and not used in ship berthing at Point Tupper. (Although it may have been called in if needed.)
Now the tug has been sold to McKeil, who, although based on the Great Lakes, work all over the east coast. They are also noted as the buyers of most of Eastern Canada Towing's (and now Svitzer's) surplus tugs.
McKeil Marine as they are commonly known, usually name their tugs after people, so expect a name change soon.
.
Posted by Mac at 7:39 PM