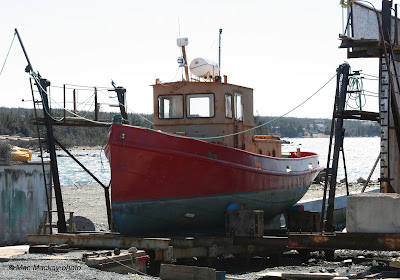 The newest tug for Groupe Océan of Quebec City is named Ocean Ross Gaudreault, and was registered yesterday. Registration usually precedes completion by some months.

The 402 gross ton tug is under construction at East Isle Shipyard in Georgetown, PE and is of the same design as several sisters delivered over the past few years. It is an ice rated 5,000 bhp azimuthing stern drive tug, with fire fighting and escort capabilities.

Following Groupe Océan's recent naming policy this tug honours another important figure in Quebec shipping. M. Ross Gaudreault was the CEO of the Port of Quebec, and retired on December 31, 2010.

Update: The tug arrived in Quebec City May 4 to begin trials and commissioning.
Posted by Mac at 9:41 AM No comments:

Further news on the Fjord

The tug Fjord Éternité has been loaded aboard Fairlane, using the ship's own cranes, and is en route to Halifax. Arrival date is listed as April 2. As of this morning the ship was just entering the Kiel Canal. An excellent photo of the lift can be found on Shipgaz: http://www.shipgaz.com/news/top20/top4_news.php
Posted by Mac at 9:08 AM No comments:

It now appears that Fjord Éternité will be coming to Halifax aboard the heavy lift ship Fairlane. That ship sailed recently from Ceuta, and passed Gibraltar giving Svendborg as its destination. It is due there on March 18. The ship is also due in Halifax around the end of the month to load locomotives. . For an up to date photo of Fjord Éternité see: http://www.marinetraffic.com/ais/showallphotos.aspx?mmsi=316019016 .
Posted by Mac at 9:04 AM No comments: 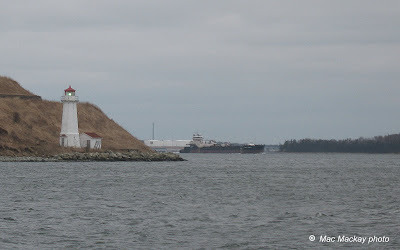 Yesterday afternoon the tug Victorious/ barge John J. Carrick left the McAsphalt pier in Eastern Passage for sea. They had been idle since January, but are now back in service, and no doubt headed for the Great Lakes. The St.Lawrence Seaway reopens for service next week.
See my earlier posting at:
http://tugfaxblogspotcom.blogspot.com/2011_01_01_archive.html
.
Earlier in the morning, the tug made an independent trip to pier 30 for about two hours. Due to the construction of the McAsphalt pier, the tug is not accessible for convenient delivery of stores, lube oil, fuel, etc., so that is the likely reason for the rare bargeless trip.
The articulated tug/barge combination is operated by the Upper Lakes Group for McAsphalt Industries. The recent sale by Upper Lakes Group of its large ships to Algoma Central Corporation did not include this pair. Upper Lakes also operates the tug Commodore Straits (built in Halifax as Haida Brave) which was not included in the sale, but has been listed for separate sale.
.
Posted by Mac at 8:57 AM No comments:

Maintainer I up for maintenance 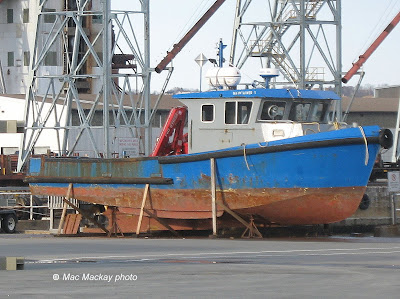 The Halifax Port Corporation's jack of all trades workboat Maintainer I was hauled out this week for refit at pier 29. The boat does a variety of chores related to maintaining the port's fendering system, and chases around picking up harbour flotsam, such as deadheads and other hazards.
After a busy winter, it is time for a cleanup, shave and haircut before the summer season starts. 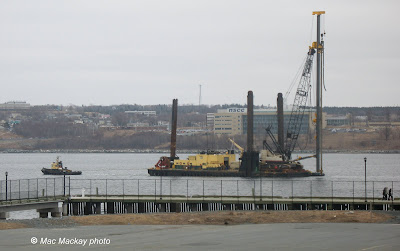 Whitby tows the dredge Canadian Argosy northbound this morning. The tug Carl M is on the other side and will provide assistance to get alongside at pier 9.
During the past week the Liebherr dredging crane was offloaded at the ramp at pier 36 and this Bermingham pile driving crane was driven on. They will continue working at the Halterm, pier C extension.
Posted by Mac at 1:32 PM No comments:

The tug Stevns Icecap was registered in Canada today as Fjord Éternité. Port of registry is Quebec City.
The tug is still lying in the port of Svendborg, Denmark, however its AIS system has now been turned off, and it will be impossible to track.
.
Posted by Mac at 7:36 PM No comments: 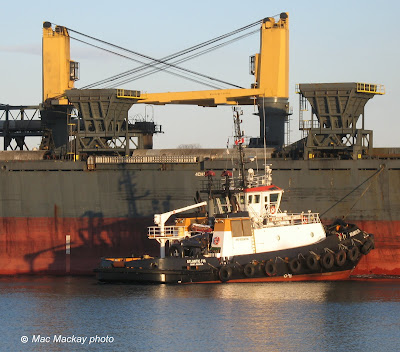 Atlantic Towing has joined Green Marine, a shipping industry environmental organization. This is a worthy move for a forward looking company.
Hidden within their announcement is one tantalizing tidbit of info, that their Evergreen Tug Technology (hydrid tug) is in the final stages of development. This must mean that they are planning to build a hybrid tug. If so they would be joining a very select group of tug operators, including Foss (which is has two hydrid tugs)
Not mentioned in the latest news is a possibly interesting connection. One of the world's leading tug hybrid technology firms is based in Prince Edward Island, and that is where Irving Shipbuilding has its tug building yard. Seems like a natural.

Read more here:
http://thechronicleherald.ca/Business/1231004.html
Posted by Mac at 9:51 AM No comments:

Remember the Janie B? 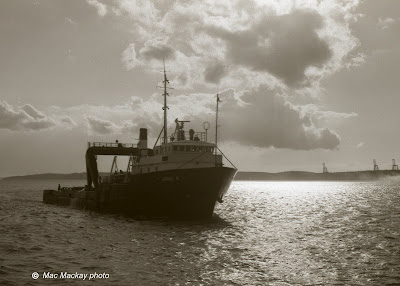 1. Janie B. approaches the Mobil dock in Dartmouth, 1977-11-19.
.
Among the first generation Canadian built offshore anchor handling/ tug/ suppliers, were a pair built for Fednav Offshore. Since they exchanged names early in their careers it is sometimes hard to keep them straight. Both were built by Bel-Aire Shipyard Ltd in North Vancouver in 1972, and even shared the same hull number. 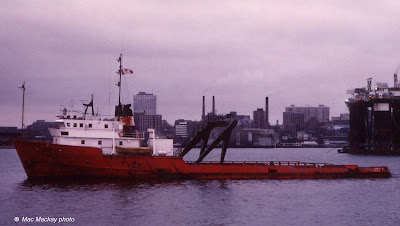 2. Cathy B servicing a rig in Halifax harbour.
.
First off the mark was hull number 222A, launched as Nordic Offshore, then renamed Janie B and was quickly renamed Cathy B. It operated on the east coast under that name for several years, and when Fednav joined forces with Seaforth it was renamed Seafed Margaree in 1981.
In 1983 it was transferred to Singapore operations and sold in 1987. Gibraltar flag owners renamed her Chungwa III, and in 1989 Honduran owners renamed her Rotam I. By this time she had become a cargo ship, working in the Caribbean. She was apparently still operating as recently as June of last year. 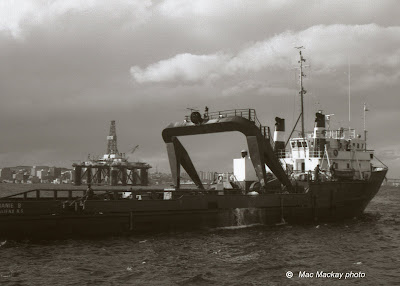 3. Janie B. also on 1977-11-19 after servicing Sedco 709 in Halifax harbour.
.
Bel-Aire's hull 222B also started off life as Nordic Offshore, became Cathy B. and was quickly renamed Janie B. She also operated out of Halifax under that name for several years. 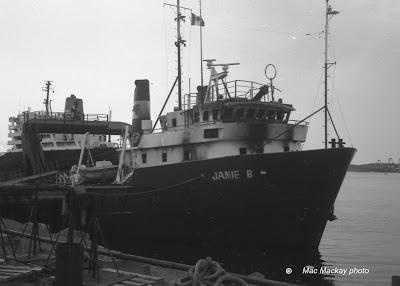 4. Janie B. 1978-08-12, at the Mobil dock.
.
One particular incident remains memorable. Her accommodation was completely gutted by fire August 12, 1978. Fortunately the fire broke out when she was tied up at the Mobil dock in Dartmouth and no one was hurt. The next day Cathy B. towed her to nearby Dartmouth Marine Slips where she was repaired. 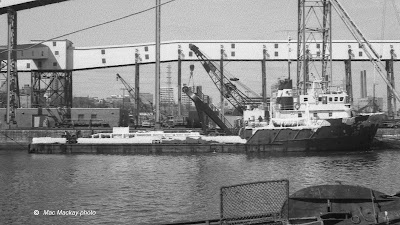 5. Like many first generation boats these ones were equipped with a travelling deck gantry, to be used for anchor handling. Other techniques became common and the gantry was removed at pier 28, 1979-03-18 and scrapped.
.
In 1981 Janie B. she was sold to the Minister of Transport and converted to a search and rescue vessel. Renamed CCGS George E. Darby, she was transferred to the west coast and extensively rebuilt. This included a new full width bridge, enhanced accommodation and new lifeboats. She was host ship for several visiting ships at Expo 86, including some Japanese civil defence vessels. 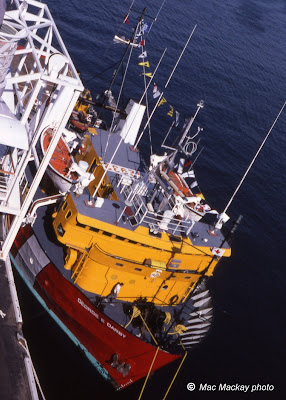 6. CCGS George E. Darby at Canada Place, Vancouver 1986-05-15, showing off her full width bridge and snappy new SAR colour scheme.
.
In May 1992 she was renamed 601 in preparation for sale, which took place the next year. Her Canadian register was closed April 23, 1993 when she was sold to Panama Maritime Inc and renamed Rambo.
That ownership lasted until 1997 when Oceaneering of Houston, TX bought the ship and gave her a major conversion to become an offshore diving and maintenance vessel named Ocean Project under the Vanuatu flag. Among her achievements was recovery of the Liberty Bell 7 space capsule in 1991 from 16,040 feet of water.
It was announced this week by Marcon International shipbrokers that they have arranged her sale to Peruvian owners, Obviously there is still life left in the old girl. See a recent photo on Marcon's web site at:
http://www.marcon.com/library/sales_reports/2011sales.pdf
.
Posted by Mac at 8:27 PM No comments: