The small tug Strait Raven arrived in Halifax from Sydney late August 30 with the McKeil Marine barge MM143 and tied up at the Cherubini dock in Eisner's Cove. Although a small barge at 542 gross tons, it has a clear deck area on hull dimensions of 43.90 x 16.46m, so can carry a significant size load. Cherubini Metal Works specializes large metal fabrications such as the bridges recently completed for Toronto. 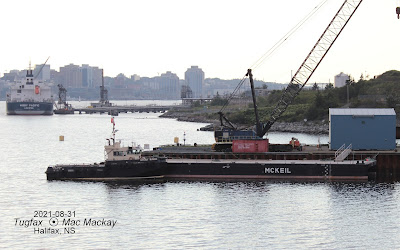 Strait Raven was  built by its owners, Superport Marine Services of Port Hawksbury, NS in 2013 and is a twin screw 1,000 hp vessel, also equipped with a bow thruster. 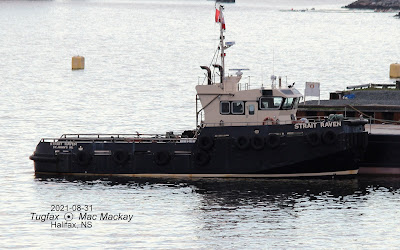 A very useful vessel, it has carried out tows throughout the region, between Newfoundland, Nova Scotia and New Brunswick.

It may be the first time that a "multi-cat" type vessel has made an unassisted transatlantic crossing. Even if it is not the first, today's arrival (August 24) of Tidal Pioneer is a notable one. The small workboat, measuring only 26m x 11m, and rectangular in shape, sailed from Rotterdam August 5. After a stop in the Azores, it resumed its voyage August 15 and sailed through the tail of Post Tropical Storm Henri before arriving in Halifax this morning. 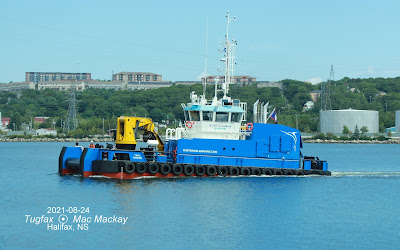 Built on strictly utilitarian lines, the vessel has a square "bow" with push knees, large working deck, open from  bow to stern, with wheelhouse offset to starboard, a small superstructure and exhaust stacks to port, and a pair of cranes - one forward and one aft.
This type of vessel, commonly called a "multicat", although that is a trademark, is popular world wide, but still rare in North America. Dominion Diving's Dominion Warrior was the first to be seen in these parts, and it arrived from Europe on a heavy lift ship in 2018.
Tidal Pioneer is owned by Sustainable Marine Energy, the Scottish/Canadian company that has developed floating tidal power generators. It is currently commissioning the Grand Passage project, between Digby Neck and Brier Island, Nova Scotia. The floating platform has been built by A.F.Theriault + Sons, Meteghan River, NS, and equipped with tidal turbines built by Schottel. Seabed anchors and undersea power cable work are scheduled for completion this summer. Presumably Tidal Pioneer will be used in the construction and servicing of the installation. 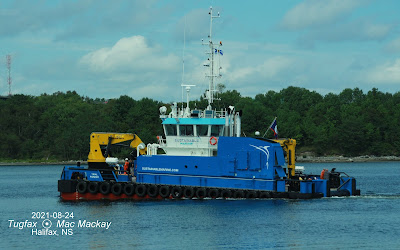 Tidal Pioneer was initially laid down in 2019 by Neptune Shipyard in Aalst, Netherlands as their hull number 556 then fitted out and completed for SME earlier this year. Neptune's multi-purpose vessels are called "Eurocarrier" and Tidal Pioneer appears to be based on the 2611 standard design, with many modifications to suit the specific needs of SME. It is a twin screw vessel, of 2600 bhp.
Registered in Canada July 2, it was reflagged to Belize for the delivery trip. This is standard procedure for ship delivery companies. They are contracted by means of a charter arrangement, and use experienced delivery crews, mostly from the Netherlands. These crews also perform warrantee monitoring, break in procedures and other work during the delivery voyage. They must also be a hardy breed of seafarer to withstand a transatlantic voyage like this one.
.

With the lack of offshore oil and gas activity off Nova Scotia there has been no call for supply ships in the area. There were several boats laid up here earlier in the year, but they had all been redeployed to Europe, and it seemed unlikely that we would see any more.

However there have now been two visits. First was the return of Atlantic Condor after delivering two Canadian Coast Guard lifeboats to British Columbia.

See: New Gig and Lifting On

After off loading the boats in Victoria, Atlantic Condor was then used to assist in oil removal from an old shipwreck working with Resolve Marine Group and using an ROV to hot tap the hull and remove fuel.

Atlantic Condor arrived back in Halifax July 27 and after a short period at the IEL dock in Dartmouth returned to sea August 14 on an ROV survey far offshore. 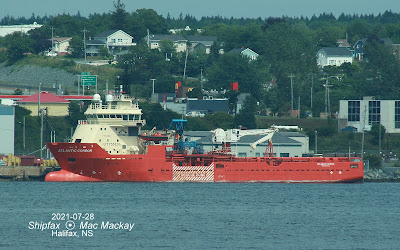 Today, August 16, saw another arrival, Siem Pilot from St.John's. One of the few remaining members of Siem's Canadian subsidiary Secunda Canada LP, the ship entered layup at the COVE dock in Dartmouth. 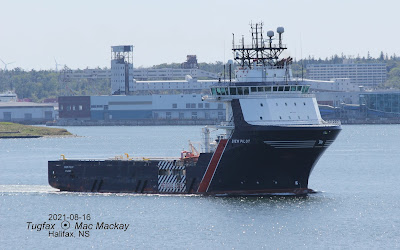 It is a 5,000 gt supply and pipe carrier. Construction started in 2007 at UMO, KD-Eregli in Turkey but was completed by Eidsvik, Uskedalen, in Norway in 2010. Fully equipped for standby and firefighting it is also DP2 with diesel electric drive and ROV support. Although not a tug, it has a bollard pull of 70 tonnes.
With its arrival in Halifax, possibly for layup, Siem/Secunda is left with Avalon Sea working off Newfoundland on the Hebron field.
.

The tug Sandra Mary had a narrow escape today August 1, 2021 when it began taking water off Charlottetown, PE. Thanks to a quick response from the CCG and private boat owners a pump was delivered and a CCG mechanic assisted in securing the tug. It was towing the dump scow Pitts No.12 which was also secured and both were brought in and berthed in Charlottetown. 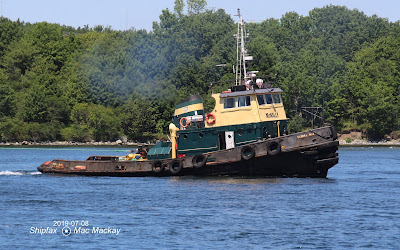 Sandra Mary was built by Russel Bros in Owen Sound, ON in 1962 as Flo Cooper and its complete history is available on the excellent Russel Bros web site: http://www.russelbrothers.ca/xflocooper.html

The tug had only recently arrived in Point Tupper after a long trip from the Great Lakes.