Today (April 29) the Canadian government announced a $105 mn contract for four new tugs has been awarded to Industrie Océan shipyard in Ile-aux-Coudres, QC. The program, expected to take 42 months, will add 25 to 30 new jobs for the shipyard which employs up to 110 people, and will occupy about 40% of the yard's capacity. 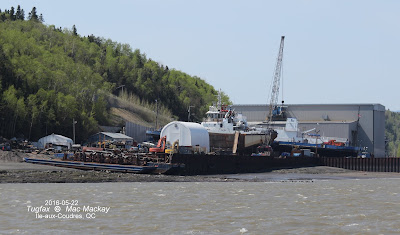 Despite its small footprint the shipyard has a large covered building hall where it could build two tugs at once. It also has repair slips that can accommodate several ships at one. Parent company Groupe Océan also operates a fabrication facility in Quebec City which builds components up to the size of  deckhouses and can do fit out. 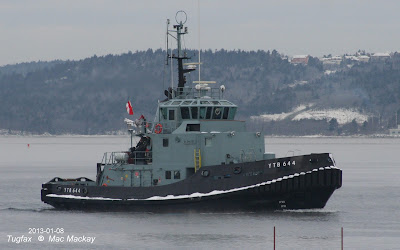 The five Glen class tugs, built in 1976-77 have only 1750 bhp, but due to Voith-Schneider propulsors are ideally suited for dockyard work,

Long in the planning stage, the new tugs will replace five Glen class tugs, three based in Halifax and two in Esquimalt. The tugs will be operated as naval auxiliary vessels, using civilian crews, and will work within the naval dockyard for ship berthing and firefighting, but will also undertake coastal towing.

The original mandate of the program was to use "proven design" but there was been no revelation yet on propulsion systems, power or name of designer. 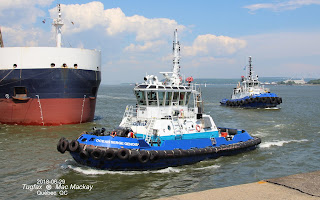 Océan Serge Genois returns to base in Quebec City. It is likely to be the model for the new tugs.it has an enlarged wheelhouse compared to earlier versions.

Industrie Océan has built a flotilla of tugs of different sizes for parent company Groupe Océan.
Several have been of essentially the same Robert Allen compact tug design and have worked successfully in Montreal and along the St.Lawrence River. They are rated at 4200 bhp with azimuthing stern drives. Five, built between 1999 and 2010 currently serve the current Océan fleet. Another was built for export and another, formerly with Svitzer, now works on the west coast.

Updated:
News has reached me that the design for the tugs is not currently in use in Canada. With one of the world's foremost tug designers based in Canada, with tugs built and operating around the world, one hopes that Robert Allan Ltd will be the designers.

However Industrie Océan has also worked with the Dutch company Damen, (the largest, by volume, builders of tugs). to build a dredge and some smaller work boats. Since Damen has recently built three hybrid tugs for the Dutch navy and two ice class tugs for the Swedish navy, perhaps the design and construction assistance may be coming from the Netherlands.

The well known OSV, formerly Panuke Sea, has been ordered sold by the Federal Court. An ad appeared in local newspapers today giving creditors 30 days to file liens. The ship has been laid up in Sydport, Sydney harbour and is not being maintained. According to court filings on behalf of Heddle Marine, operators of the facility, the vessel is taking up needed space, and its resale value is diminishing. 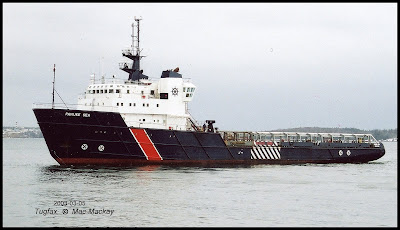 Panuke Sea on trials after its second rebuild.

The ship is one of four former USSR suppliers acquired by Secunda Marine Services and rebuilt. Originally Neftegaz 14, it was built in 1984 by Komuny Paryskiej in Gydnia, Poland, powered by a pair of Sulzer engines (built under license by Zagoda) giving 7200 bhp. The USSR Ministry of Gas Industry built a large fleet of similar vessels with excellent ice class hulls, but with privatization of the Russian petroleum industry many were laid up.

Secunda acquired the tug / supplier in 2001 and it arrived in Halifax under its own power with a Russian crew on October 15. It was registered in Halifax as Panuke Sea on October 22.

I have covered the subsequent rebuilding of the vessel previously. To summarize it was rebuilt alongside in Halifax over that winter, then went to St.John's for drydocking and returned to Halifax for trials in July 2002. However the ship did not meet standards for visibility of the afterdeck, and another rebuild began which was not completed until March 2003.

Panuke Sea was named for the area off Sable Island where oil and gas fields were developed,
and it is likely it served some of that activity as well as other Secunda contracts. Secunda changed ownership several times, through J.Ray McDermott, and back to Secunda Canada LP, but in 2006 when the company was again being sold the ship was put up for sale asking $600,000.

New owners, identified as Servimax Servicos Lda, acquired the ship and closed Canadian registration September 19, 2017. They renamed it Kydy Sea and hoisted the flag of Togo. It has remained in Sydney Harbour ever since.