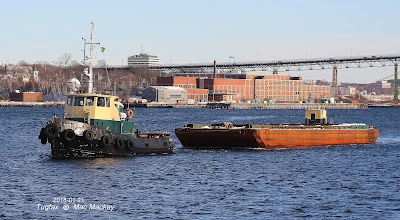 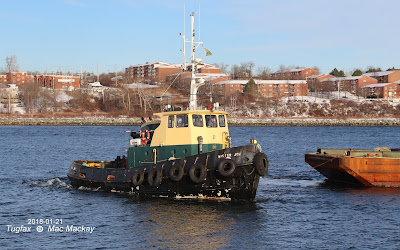 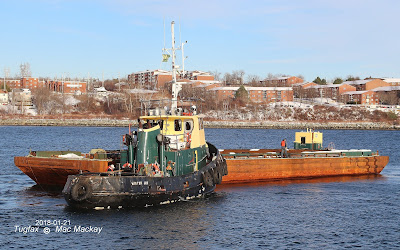 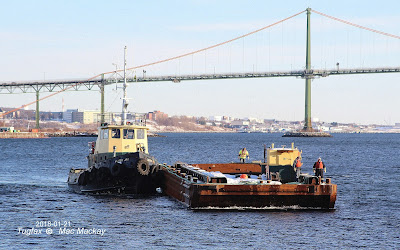 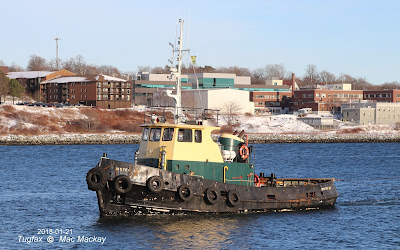 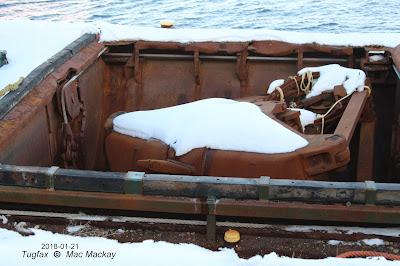 Horizon Maritime Services Ltd (of Halifax and St. John's) has been involved in crewing and other services related to the offshore sector since it was founded in 2015. It has recently expanded into ship owning as part of a growth strategy. Owned and managed by Nova Scotians with considerable depth of experience with other operators, the company has chosen as its first vessel a highly sophisticated offshore support vessel with a range of capabilities. 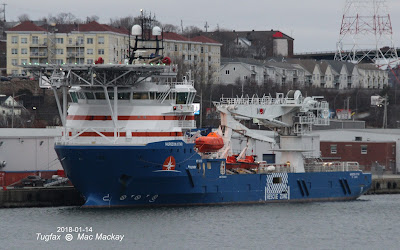 Horizon Star arrived in Halifax for the first time January 10 after working off Newfoundland since the summer. Built by Kleven Ulstenivik to a Marin Teknikk MT 6015 design, the ship was originally ordered by IES Energy Marine of Malaysia and launched in 2015. When IES defaulted during the collapse of offshore activity, Kleven attempted to sell the ship, but with little success. Horizon, well financed by Nova Scotia investors, was able to wring a very good deal out of Kleven, and had the ship completed to their own specifications.

The naming ceremony in Norway August 3, 2017, coincided with is registration date in St.John's and Horizon Star sailed soon after, arriving in Newfoundland in mid-August. 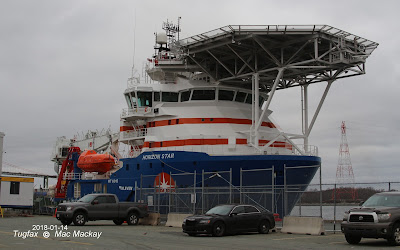 At roughly 100m long and 5204 grt, it is reputed to be the largest Canadian vessel of its type. It is equipped with, among other things, a helicopter landing deck, a moon pool, ROV handling gear, and a crane that can work to depths of 3 km. Bristling with the usual array of directional thrusters, it is also fitted with the now standard fire fighting and oil skimming equipment, and can accommodate 60 persons, including its crew of 16. 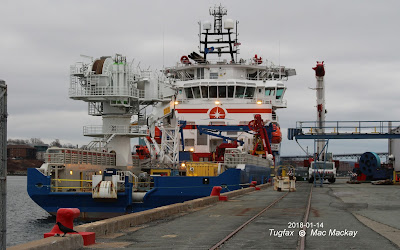 After taking on some fuel today the ship returned to the IT Telecom berth at Pier 9A where a crane is standing by to load some equipment, that appears to be a large cable reel. The stern slide, fitted this week, indicates that it has been contracted to do some cable laying or cable repair work. 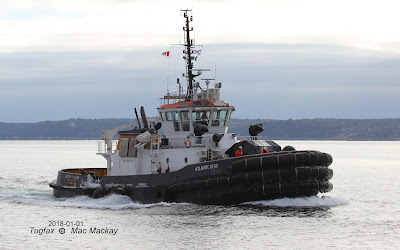 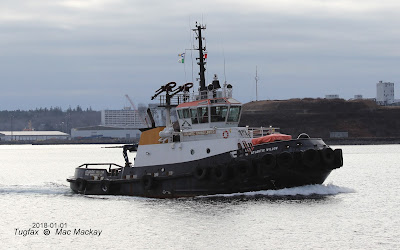 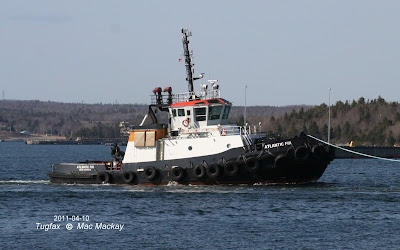 Groupe Océan has assigned the tug Escorte to the port of Goderich, ON. Situated on Lake Huron the port sees about 250 ships a year. Most of those ships load salt at the Sifto Salt mine, located in mid-harbour. There is also a grain loading facility and a grain elevator in the port.
We are told that Groupe Océan has a contract with Algoma Marine for ship docking at the salt pier, and has provided tugs for several years. Most recently they used the former pilot boat Ocean Côte-Nord.
It was built by Industrie Océan at Ile-aux-Coudres in 2001 as Côte-Nord and was based at the Escoumins pilot station with near sister Charlevoix built in 1995.
When the Laurentian Pilotage Authority replaced the two boats, Charlevoix went to Les Services I.C.E. Inc and has been stationed in Sydney, NS transferring ice advisers to and from ships transiting the Gulf and  St.Lawrence River. 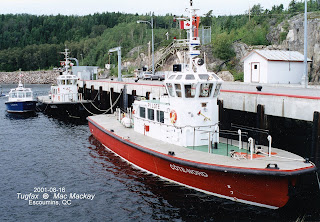 Côte-Nord and sister Charlevoix at the Anse-aux-Basques dock at Les Escoumins, QC..

Côte-Nord was transformed into a tug and sent to Goderich, ON in 2014. With a modest bollard pull of 10.8 tons, it must have been a bit of a challenge to work lakers in the tight confines of the port. Goderich remains open well into the winter as demand for road salt continues, but the port and its approaches often become choked with ice and other boats are often needed to break and scatter the ice.

Early in December Océan Côte-Nord was reported downbound through the St. Lawrence Seaway system and arrived in Montreal December 5.

Escorte, based in Hamilton, ON for a time until 2010 and again since 2016, arrived in Goderich December 17 and began work December 18. I have recounted the history of the tug here before, September 11, 2011
Built in 1967 as USN 760 Menasha it was one of the earliest Voith-Schneider tugs in North America. 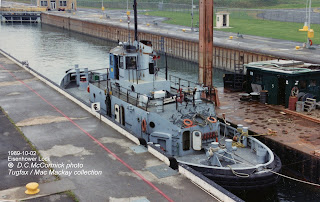 Still in navy colours, the tug worked for the US side of the Seaway.

After several transactions and refit it has served Océan in a variety of work, most recently in Hamilton, also assisting shipping in the Welland Canal.With more powerful V-S tugs now assigned to Hamilton, it has moved on once more. 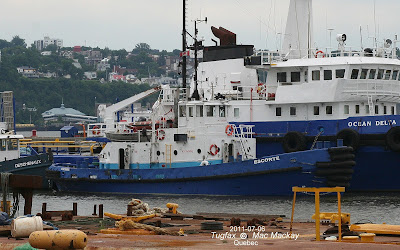 No account of tug activities in Goderich would be complete without mention of the colourful fleet of MacDonald Marine [MacTug]. Their stylish little tugs have been a fixture in the port for decades, and the family owned business traces its origins to the days of sail.

MacTug handles ships using the grain berths, and sometimes the whole fleet is called out to work a ship. 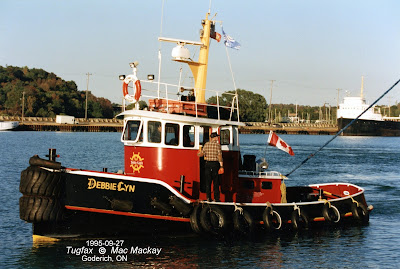 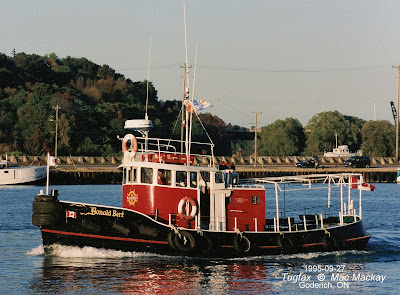 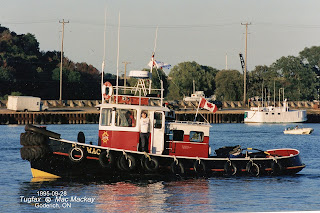 
Since the above photos were taken Ian Mac received a new wheelhouse: 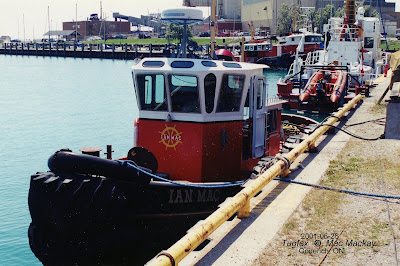 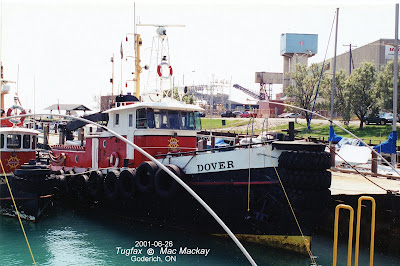 Dover built 1930, (on a salvaged iron frame dating from 1905) 280 bhp, is reported to be out of service. its engine has been a fickle one by all accounts and that may be the problem. Its riveted hull, having been in fresh water its whole career is likely to still be sound.