Groupe Océan has recently decommissioned some of its older idle tugs, possibly for sale or in some cases more likely for scrap [ see Part1 and 2 - previous posts]. One of the tugs is the Articulated Tug Barge pusher Mega, along with its barge Motti. The duo have been laid up for sale for years, without any takers. 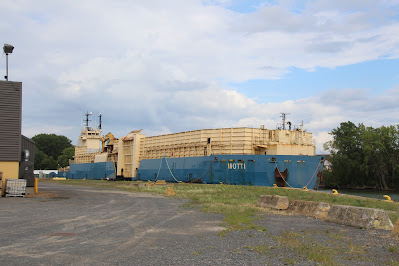 The tug Mega was built in 1975 and is ice rated and with four Wartsila diesel engines delivering 6,000 hp through electric drives. It was refitted with Articouple connectors and paired with the 5195 gt barge in 1993. It was previously named Teuvo to 1985 and Aatos to 1993. The barge can carry 28,000 cubic meters of wood chips, and is fitted with a side door/ramp, and carried crawler backhoes for unloading.

Océan took delivery of the duo in March 2013 and it did make some trips to Port Hawksbury, NS with wood chips as well as working on the St.Lawrence.

Steady work did not materialize however, and the pair were laid up together in Sorel. 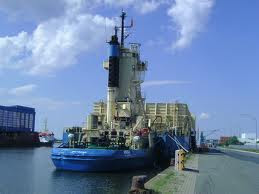 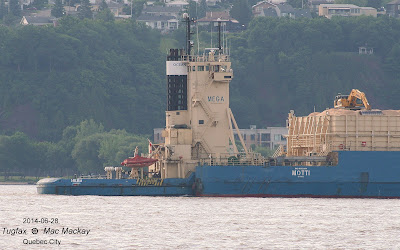 Canadian registrations for both tug and barge were closed May 17, 2022. Whether this indicates a sale to foreign parties or a trip to the scrappers is unknown at present, but this post will be updated when information is received.

Another idle Groupe Océan tug is the Avantage, and its fate is also unclear. Its Canadian registration was closed July 25, 2018 and it remains idle in Quebec City. It was recently moved from one berth to another, but that may not have any particular significance.

Laid up at Quebec City in 2018, it was next to the Brochu which was scrapped at Ile-aux-Coudres.


The Avantage was built in1969 by Boelwerf in Temse, Belgium as Sea Lion for Union de Remorquage et de Sauvetage (URS). Powered by two 8 cylinder ABCs driving a single screw, it was rated 2160 bhp 38 tons bollard pull or 3500 bhp, 45 tonnes bollard pull depending on sources.

It stopped over in Halifax in March 1997 on delivery to MTL Marine Tug Inc of Montreal, and it was renamed Avantage. Ownership passed to Les Remorqueurs de Trois-Rivières in 1999, and was drydocked for hull work in Halifax in October of that year. The company was later taken over by Océan. 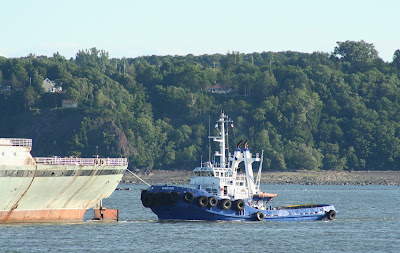 Avantage working as stern tug on the Aquarama scrap tow in 2007.
The eventual fate of the Avantage is unknown, but this post will be updated when that becomes clear.
.
Posted by Mac at 8:34 PM No comments:

Groupe Océan is disposing of its older idle tugs. One of those is Océan Basques dating from 1972 when it was delivered by Collingwood Shipyard to MIL Tug + Salvage of Halifax. The successor company to  Foundation Maritime ordered two powerful icebreaking tugs to operate at Sept-Iles, QC under contract to the Iron Ore Company of Canada. Named Pointe- aux-Basques and Pointe Marguerite, they were powered by two V-12 GM engines rated at 4200 bhp and 73 tons bollard pull. They were twin screw, with fixed pitch props in nozzles. In 1973 MILTug became ECTUG (Eastern Canada Towing Ltd) and the tugs continued in service in Sept-Iles. In November 1978 the Pointe Margeurite was rammed by a ship and sank in Sept-Iles Bay, with the loss of two lives. A replacement, built to the same specification, and named Pointe-Sept-Iles, was delivered in 1980. The tugs were "triple decker" with high wheelhouse for better visibility while working with large bulk carriers.

Pointe-aux-Basques after the salvage tow of the Macreefer from the Gulf of St.Lawrence to Halifax.

In 2013 Svitzer Canada Ltd, the successor to ECTUG, was not able to renew the Sept-Iles contract, which was awarded to Groupe Océan. The tugs also went to Océan and were renamed Océan Basques and Océan Sept-Iles. Replacement tugs were soon acquired and the two tugs were reassigned. Océan Basques emerged from a major refit in 2014 with its new name. 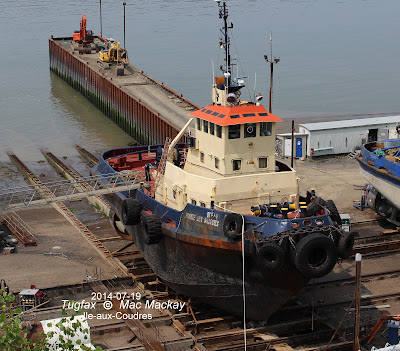 The tug's cut away icebreaking bow is visible in this photo. 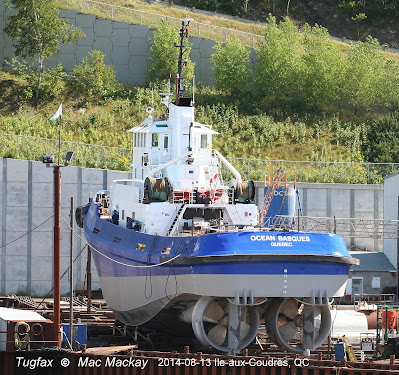 The rudders were protected by free standing frames. 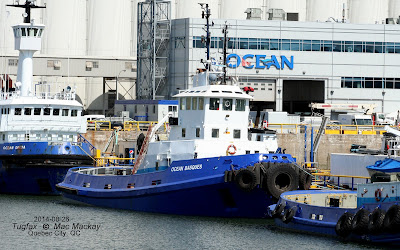 The tug was finally laid up in Quebec City in December 2021, and its Canadian registration was closed May 17, 2022, along with Océan Echo II (see Part 1) and Mega (see Part 3). Whether they have been sold foreign or are headed for the scrappers is unknown at present, but this post will be updated when that becomes clear.

The Quebec City based operator Groupe Océan has been growing substantially in recent years with expansion to British Columbia and Jamaica and the acquistion of new tugs. On May 21 they took delivery of the small Océan Aqua delivered by heavy lift ship to Valleyfield, QC from Malta. A Damen Stantug, the former DMS Raven, it had been operating in the Persian Gulf for Damen Marine Services. The 1460 bhp twin screw tug was built in 2003 by Stoc.Kozle Serwis in Poland and Damen Hardinxveld in the Netherlands.

Meanwhile the company is shedding three of its older tugs which have not been operational for several years. These include: 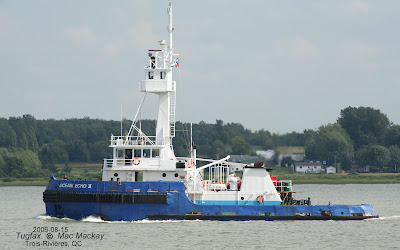 This twin screw 3,000 bhp veteran tug was built in 1969 by Port Weller Drydock for Atlantic and Pacific Barge Transport Ltd. Named Atlantic it was contracted, along with two 7850 ton deadweight barges built in the same yard, for a ten year charter to Anglo-Canadian Pulp and Paper to carry pulpwood from Forestville, QC to the paper mill in Quebec City. The barges Betsiamites and Sault au Cochon each had a 3600 cord capacity. While one barge was unloading in Quebec City, the tug was towing/pushing the other barge for another load.  The tug was renamed Laval in 1975. It generally pushed the barges from a stern notch using face wires, but also towed them on a tow line depending on conditions.

At the end of the charter in 1979 Anglo's subsidiary St.Charles Transportation Co Ltd bought the tug and barges and sent the Laval to Halifax for a third barge, named Jean Raymond. Reed Paper Ltd took over Anglo in 1974 and continued to operate the tug and barges. 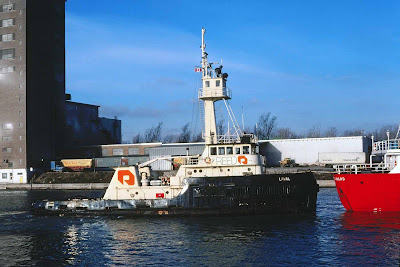 Gordon Turner took this photo of the Laval in Reed Paper Co markings, in the Welland Canal.

Reed International Inc sold the operation to Daishowa Paper Manufacturing in 1988 and the tug and barges came under the ownership of Daishowa Maritime Inc.

In the early 1990s Groupe Océan acquired the tug and in 1996 gave it the named Océan Echo II. They also fitted it with Articulated Tug Barge rams in hull blisters, and modified the barge Betsiamites  accordingly. They now hauled wood chips to various paper mills. The barge also carried a crawler backhoe with a huge bucket to move the cargo. 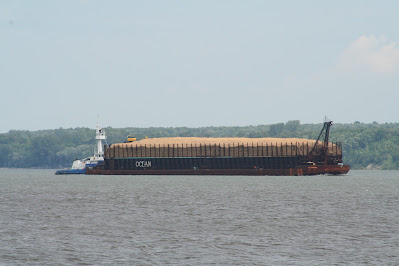 In 2008 the tug was back in Halifax, this time to take away the former shipyard barge Timberland which had been acquired by Groupe Océan.

When tug and barge were not working on the St.Lawrence they sometimes ran wood chips to the paper mill in Point Tupper, NS, or loaded wood chips at Sheet Harbour, NS.

In May 2014 the tug sustained severe bottom damage when it ran aground outbound from Kingston, ON. It was out of service for some time for repairs 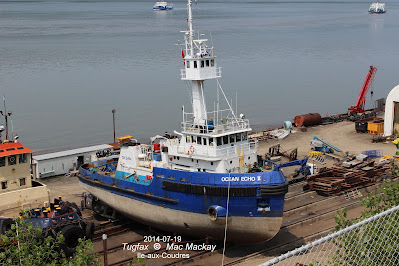 In this view, the ATB rams in hull blisters are clearly visible. 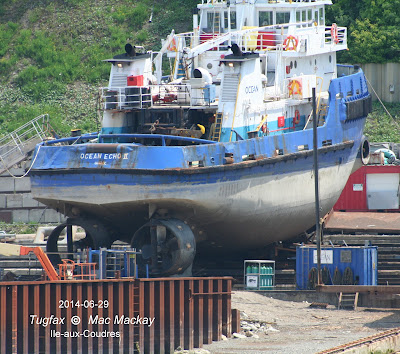 The fully moulded hull was rare in tugs even as long ago as 1969. Note also it has no bilge keels.

In 2018 it took the barge NT811 from Quebec City to Iqaluit for a port construction project, but since then it has seen very little service. On May 17, 2022 its Canadian registration was closed, along with the tugs Océan Basquess and Mega [see separate posts for each.] Whether these boats have been sold to foreign owners, or for scrap is not known at this time. Further details will be posted here when known.

Ocean Echo II and Ocean Basques are tied up together in Quebec City and Mega is in Sorel, awaiting the next move.

The Evans McKeil, a veteran Canadian tug has reached the end of its useful life and has gone to the breakers. Dating from 1936 it had a 53 year career under the United States flag before coming to Canada fro another 33 years of service.

In fact the tug had three careers, starting in the unusual location of Balboa, in what was then the Panama Canal Zone - in fact United States territory. The Panama Railroad Company was one of the operating entities of the US government (and actually pre-dated the Canal), and operated tugs and barges. It built this tug in its own shipyard, naming it Alhajeula (Spanish for a little jewel). As with many railroads of the time, they were changing over from steam to diesel locomotives, so were familiar with diesel electric propulsion. The tug was equipped with an Ingersoll Rand D-E plant with two 6 cylinder, 500 bhp Ingersoll Rand diesels, eacxh with 50 kW generator a 900 hp engine driving a 750 hp DC electric motor. (I don't know if that was the engine output or the power at the shaft.) *A single screw tug, it was 111 ft long x 25.6  ft breadth, and was intended for barge work with a heavily fendered hull. (Many railroad tugs in New York harbour were also diesel-electric and the Canadian Pacific Railroad had its own D-E tug the Prescotont in barge service between Prescott, ON and Ogdensburg, NY since 1930.)

On August 19, 1942 it was struck by a US Navy seaplane. A barge that the tug had in tow was carrying aviation fuel and it burst into flames. Six were killed on the tug, nine on the airplane.  It took nine months to rebuild the tug, which tehn returned to servic May 16, 1943.

In 1970 it was put up for sale by the Panama Canal Company. Malcolm Marine of St.Clair, MI bought the tug and brought it up the Hudson River and Richelieu River to the Great Lakes.They renamed it Barbara Ann and it went to work in general towing, salvage and ship docking. In 1976 it was repowered with a GM EMD 645-E6 main engine of 2150 bhp, making it a very powerful tug for its type.

In 1989 McKeil Work Boats of Hamilton, ON bought the tug and registered it in the company's homeport on September 20, 1990. It was then named for the founder Evans McKeil, (of Nova Scotia ancestry). 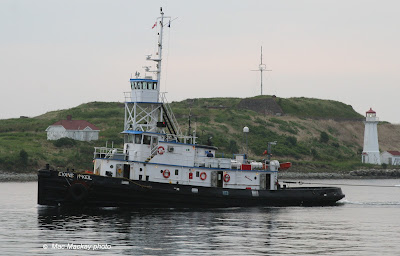 Under McKeil direction it ranged the Great Lakes, St.Lawrence and east coast - reaching Halifax on several occasions. It was given a raised wheelhouse in 1990 (which was raised again in 1991) to facilitate barge work. It operated with the brine tanker barge Salty Dog for several years, but also did other barge work, and towed old lakers to the scrap yards. 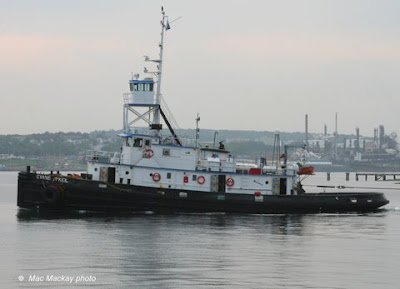 One memorable tow from Halifax was with the retired submarine Ojibwa which was loaded on the floating drydock HM1 and towed to Port Burwell, ON in 2018 where the sub was  placed on display.

On May 8, 2022, the 1943 built tug Seahound towed the Evans McKeil upbound in the Welland Canal deadship from Hamilton, ON to Port Maitland, ON where it will be broken up.

Note: There are several reports that state the tug will not be broken up - at least not right away. Updates will be made under a separate posting.

*Thanks to a reader for providing the Canal Copmany's "as installed" drawing for the sister tug, showing the two diesels, generators and motor. It also showed electro-mechnical steering.