Tugfax will be on vacation for the month of August - postings, if any, will be few and far between and e-mails will not be acknowledged.
Posted by Mac at 12:41 PM No comments:

Groupe Océan has done it again, with another major acquisition* - this time a double play.
With an estimated arrival date of August 8, at Quebec City, Stevns Ocean and Stevns Arctic will join the Océan fleet, giving a major boost to sea-going capability.
Both built in Canada, to a unique Robert Allen design, they are magnificent 5,000 bhp sea-going tugs. Since built in 2003 and 2005, they have worked all over the North Sea from their Danish home base, reaching the Netherlands, the UK, Norway and Germany.

Stevns Ocean was built by Industrie Océan at Ile-aux-Coudres, and completed in 2003, at a reported cost of $13mn.

1. Stevns Ocean alongside at Ile-aux-Coudres in final fit out. She has a massive ship handling winch forward and combination loop and tubular bow fenders. 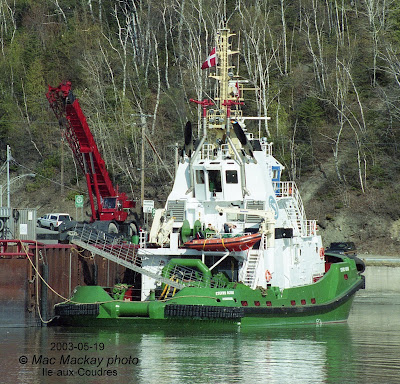 2. A multi-purpose tug, she also has a towing winch, stern roller and firefighting equipment.

Construction of Stevns Arctic was started by Industrie Océan, but the yard ran into financial problems, and construction was suspended. (The yard was later re-organized under Groupe Océan ownership and is back in business). Arrangements were made with Irving Shipbuilding to complete the tug, and it was launched as an unpainted shell September 16, 2004. It was towed to Halifax by Atlantic Teak, and in a most unusual move, it was hauled up the launch way where the superstructure was removed,. The two components were moved into the building hall where they were fitted out, reassembled and re-launched April 8, 2005.

3. Stevns Arctic's superstructure is readied for re-installing on the hull, prior to launch.

On July 26, 2005 it was towed to Shelburne by Atlantic Oak where is was drydocked for completion. On September 10, 2005 it returned to Halifax for final trials and handover. It sailed for Denmark September 26.


4. Stevns Arctic on the slip at Shelburne for completion. 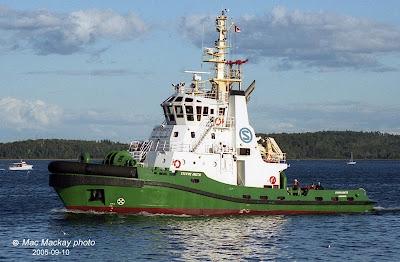 5. Stevns Arctic returns to Halifax, under her own power, for completion of trials.

Both tugs were built for subsidiaries of Nordane Shipping, to work on the European charter market. Nordane has now sold off their all-Canadian built fleet, the remainder built by Irving Shipbuilding's East Isle yard in Georgetown, PE. Two had previously returned to Canada and now serve Rio Tinto Alcan on the Saguenay.  The other five were sold to Svitzer. Can we expect more to return? They would be a great fit for someone since they are all 5,000 bhp ice class.
Meanwhile Groupe Océan will redeploy Océan A. Simard and Océan Serge Genois to Bull Arm, NL**.
Also the recently acquired pusher tug Mega*** appears to have been renamed Orléans, but as yet this has not been made official.
Update:
* I understand that the two tugs are on charter with purchase option, but they will be repainted to Groupe Oceéan colours.
** Two more tugs will assigned to Bull Arm in 2014. Groupe Océan has been awarded a major contract there for tug services.
*** This may be an error-there appears to be a barge in Quebec with that name, but with the same tonnage as the tug - update to follow.
**
.
Posted by Mac at 11:33 PM 2 comments: 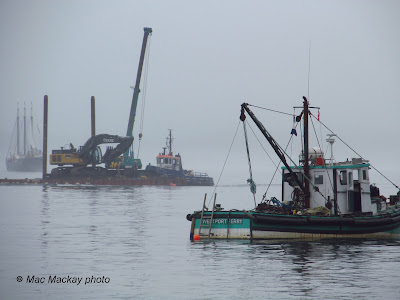 RMI Marine's Belle-D. was at work again today, this time with a sectional scow. Starting out from Le Grow's wharf in Dartmouth, it loaded a heavy lift at pier 27 then headed for the Halifax Shipyard construction site at pier 6. I suspect the heavy lift was the bug Deere crawler backhoe.
In the left background "tall ship" Silva carries another cargo of wet tourists, and in the foreground Westport Ferry conducts diving operations off the Tall Ship Quay.
Posted by Mac at 5:04 PM No comments:

While Penn Maritime tugs and barges are common sights in Halifax, it is rare to see a Penn barge towed by a non-Penn tug. This morning's arrival is Dann Marine Towing Inc's Atlantic Coast towing the barge Penn 410.


The current Penn fleet of 17 tugs and 20 barges, specializes in carrying heated asphalt and heavy bunker type oil. Dann Marine also has 17 tugs in its fleet, consisting of ocean/coastal and pushers. Once the tow got into the harbour, the harbour tug Atlantic Larch came alongside. 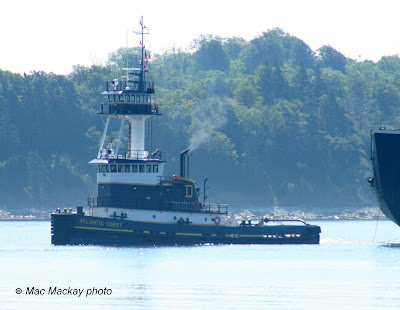 Once the Larch was secure,  the tug let go its tow wire and came around to the stern of the barge and into its stern notch. 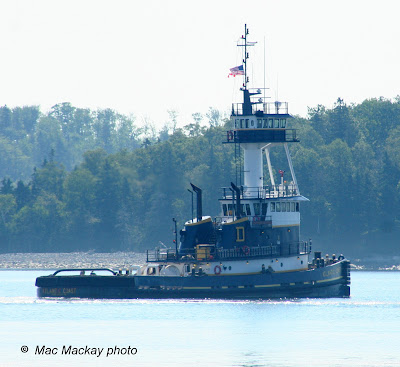 Penn 410 is a double hull barge of 7,527 gross tons/ 12,471 deadweight tonnes. It is a wire tow barge, with a deep notch, and can therefore accommodate tugs without coupler/articulation systems. 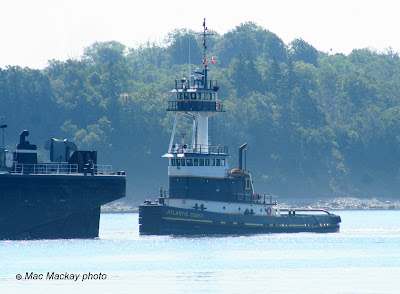 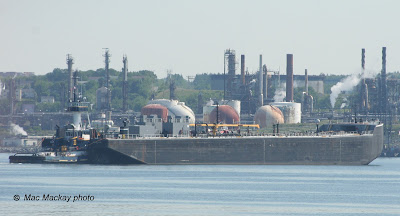 1. Keewatin works it way up the Narrows this morning.

Northern Transportation's veteran tug Keewatin arrived this morning with the barge NT 1524 and tied up at the Fairview Cove container terminal.
Built in 1974 by Yarrows Ltd in Esquimalt, BC, the tug is a triple screw shallow draft vessel, designed to work in the arctic. After many year in the western arctic, it continued through the northwest passage to work in the east.
[SINCE WRITING THIS I HAVE RECEIVED A WELCOME CORRECTION. After completion by Yarrows, the tug sailed from Esquimalt, via the Panama Canal to Churchill, and worked with her barges on the western shores of Hudson's Bay.]

It first arrived in Halifax in 2002 from Rankin Inlet. It worked on the Great Lakes in 2003 and 2004, but was back in Halifax later that year. It often worked with Atlantic Towing Ltd  and was seen with their barges in tow.
It was reported laid up in Mount Carmel, Newfoundland for time, so it is good to see the handsome tug back in Halifax.

2. The tug moves alongside its barge off Fairview Cove.

Its barge on this trip is also a veteran, built in 1973 by Burrard Dry Dock Co Ltd in North Vancouver. Despite its 1,252 gross tons measurement, it managed to get into port without a pilot. (Non-propelled vessels in excess of 1,000 tons require a pilot).
On the barge's deck were several carefully placed pedestals bearing the name of Belmire, a Quebec based heavy lift and rigging company. It would appear that one of Fairview Cove's container cranes may be a candidate for a move. On Wednesday they were seen to be loading some large components, possibly a construction crane.
Posted by Mac at 10:47 PM No comments: 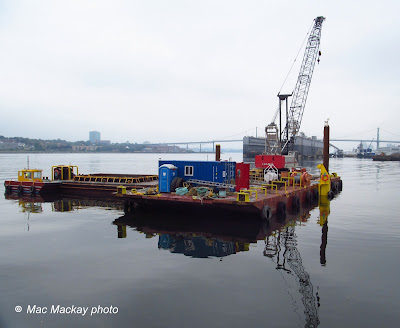 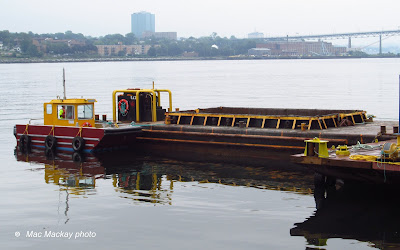 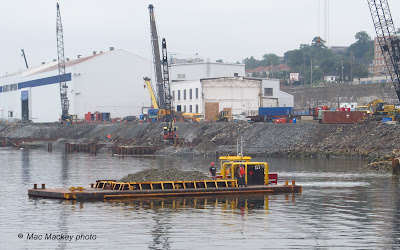 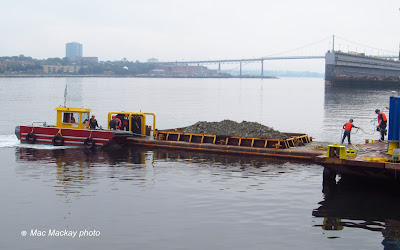 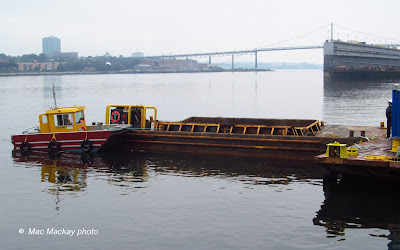 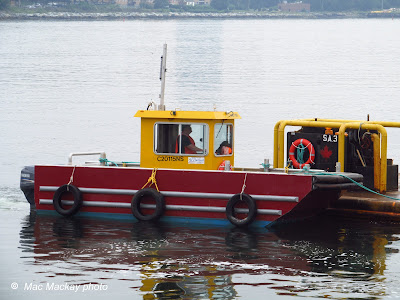 The fleet of miniature tugs built and owned by GFFM Leclerc of La Baleine, Ile-aux-Coudres, QC grows by on or two new tugs each year.  The tugs are then bareboat chartered for use in northern supply work, often by  Transport Desgagnés. They are also available to other owners by others such as construction companies.

Since all the tugs are under 15 gross tons, they are not required to be registered by name under Canadian law, but they are registered by number. The names they they carry are thus unofficial, making it especially difficult to track them. Fortunately the company has a web site which gives some particulars of the ten tug fleet.

Starting off with small single screw boats of about 300 bhp, they progressed into twin screw vessels of 300 bhp, gradually increasing in size with 500 bhp or more, to the current versions. Some have demountable wheelhouses to facilitate transport by road. 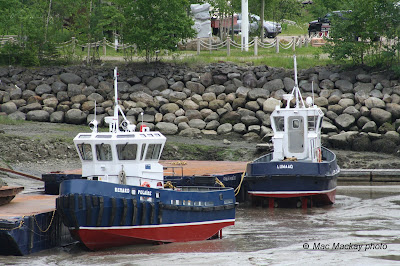 2. Renard Polaire is one of the newest tugs, built this year and measuring 14.99 gross tons.

The latest tugs have become very sophisticated with triple screws and rudders and powered with Cummins QSL9 engines. Fully outfitted with weather tight wheelhouse and aids to navigation, they appear to be very capable boats.They have also reached the maximum size of 14.99 gross tons, beyond which they will need to be registered by name, and company with another level of regulations. 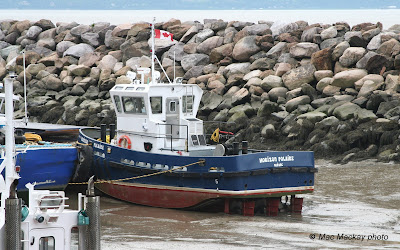 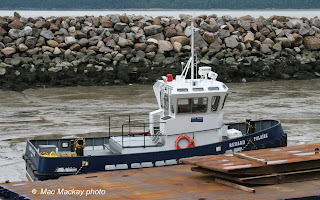 4. Renard Polaire sits alongside one of the Desgagnés pontoons, awaiting assignment in the north. It is also a triple screw tug of 1130 bhp.

The tugs and landing barges are transported on the deck of the northern supply ships, and used to ferry freight into shore where there are no port facilities.

See the Leclerc website for information on the whole fleet:http://gffmleclerc.charlevoix.net/

Photos taken at Ile-aux-Coudres, 2013-06-30. The tide was out when the photos were taken, permitting a look at triple screws and rudders, but also their showing their ability to take the bottom and rest upright.
Posted by Mac at 8:21 PM No comments: 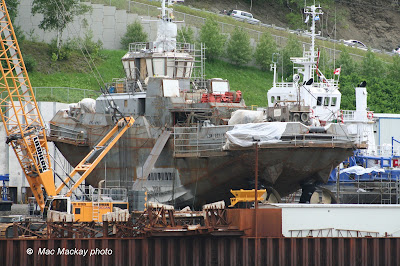 1. The new Océan Tundra is under construction at Groupe Océans's shipyard.
On the weekend I got my first look at Groupe Océan's new TundRA 100 tug under construction at Industrie Océan at Ile-aux-Coudres, QC. The new 8,000 bhp, 100 tonne bollard pull ice class tug is the most powerful harbour tug to be built in Canada. The Robert Allen Tundra design ice class tug, will be built to Lloyds 1A Super F.S. and will be used in tanker escort on the St.Lawrence, and in the arctic.The name Océan Tundra has been applied to the hull, but the ship has not been named officially yet. That will come this summer when construction is completed. 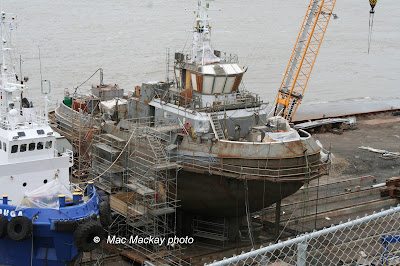 2. It dwarfs fleetmate Duga at the adjacent repair slip. Note the large escort skeg, and cut away forefoot for working in ice. 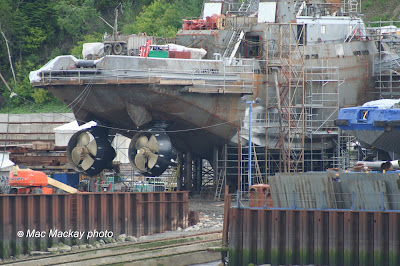 3. Large ice horns will protect the ASD drives while backing in ice. The  tug does have rolling chocks, not a common feature on ships that work in deep ice.

The photos show the large cooling intakes on the hull. These will in all likelihood be connected to heated seachests, to permit working in slushy ice. Engine cooling can be compromised in heavy ice if the seachests become clogged. External piped cooling devices, can be damaged by ice too, so the heated seachest system is used.
Posted by Mac at 10:22 PM No comments: