Theodore Too takes a trip

Ambassatours, the parent company of Murphy Sailing Tours Ltd, owners of Theodore Too, will be moving the iconic tug boat replica from The Big Harbour (a.k.a. Halifax) to Saint John, NB in June. The operators made the announcement last week. 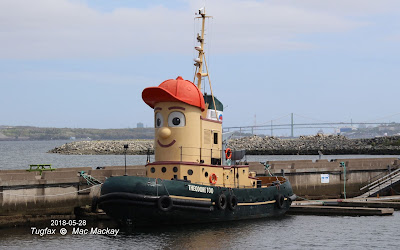 Theodore Too spent the winter at Mill Cove in Bedford and appears to be in need of a little freshening before he moves to Saint John.

This is certainly not the first time Theodore Too has left the confines of Halifax. In fact the boat is probably more travelled than many of its full size counterparts. It has sailed all along the eastern seaboard as far south as Miami and into the Great Lakes as far as Chicago. The move to Saint John coincides with the cruise ship season and is likely brought about by the disruption along the Halifax waterfront due to construction of new piers for the Queen's Marque project.

Ambassatours is hoping to appeal to nostalgic millennials who grew up with the TV series Theodore Tugboat and now want to revisit their childhood or perhaps introduce the cute fellow to their own children. 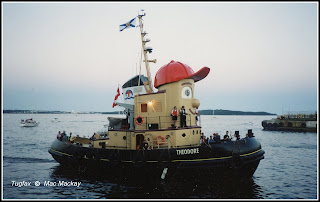 When the boat was built by Snyder's Shipyard in Dayspring, NS in 2000 it only carried the name Theodore but this was soon changed to Theodore Too because someone had already grabbed the Theodore name for their own vessel - a real tug at that.


That Theodore was built by Canadian Vickers, Montreal,  in 1932 as an oil-fired steam vessel of about 64 tons for Mont Louis Seignory Ltd, a subsidiary of the Hall Corporation.Named Vigilant it was used to tend pulpwood booms. It later passed into the hands of Marine Industries Ltd in Sorel and took the name Roseanne Simard. It was converted to a motor vessel in 1952 with 440 bhp engine. It passed through several other owners including Gaston Elie of Montreal, Coastlake Tankers Ltd of Montreal, and JW+J Anderson of Burnt Church, NB. In 1973 Techno-Maritime of Quebec City bought the tug and in 1976 renamed it Techno Manic. New owners Dufresne Construction Ltd renamed it simply Manic in 1989 and Les Constructions Ger-Con Ltée kept the name after they took it over. In about 1995 it passed into private ownership, and is believed to have sunk at its berth in St-Joseph-de-la-Rive, QC. 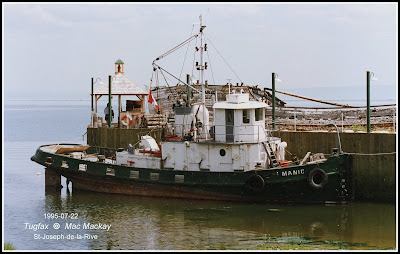 However it was salvaged and given a major upgrade including a new larger wheelhouse, and renamed Heritage 1932. 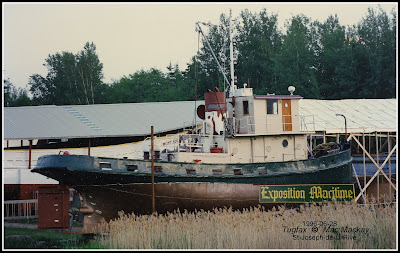 However it soon became Theodore, pre-empting the name for the full size replica. Now based in Montreal it still does sea time seasonally. Although it bears little resemblance to the TV character, it does wear the same colours as the "real" Theodore. 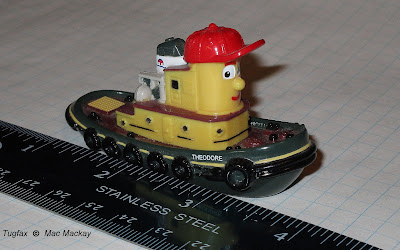 The cruise season usually ends about the end of October. Let's hope Theodore Too is back home by then, when it will be time to start a Movember moustache. 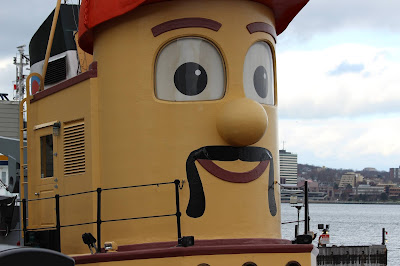 Return of the Osprey and other Atlantic Towing activity

The Province  of Nova Scotia's official bird is the osprey, a migratory fish hawk that usually puts in its first appearance of the year in late April or early May. Today's return of the big tug supplier Atlantic Osprey is certainly seasonally correct, but as to origin, it is coming from St.John's Newfoundland rather than more southern waters. 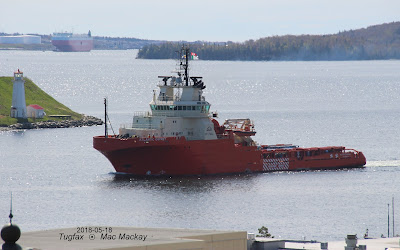 The 3453 grt, 16,000 bhp OSV is one of four similar ships in the ATL offshore fleet, two of which are UT 722 and two are UT 722L (L=long), all built at Halifax Shipyard under license from Ulstein. The boat was laid up for a time over last winter, and a large deck crane and other gear, such as an ROV davit have been removed. 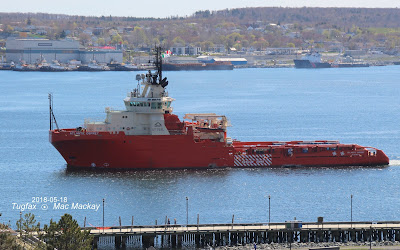 While arriving it passed Atlantic Towing Ltd's Woodside tug base, where the usual four harbour tugs, Atlantic Oak, Atlantic Fir, Atlantic Willow and Atlantic Bear have been joined temporarily by Atlantic Larch. The latter tug will likely be towing out the barge Atlantic Sea Lion for northern supply work.

Atlantic Bear went to Saint John last week to assist with an LNG tanker, but returned to Halifax in time to put on a water demonstration for the inaugural call of the auto carrier Grande Halifax on Wednesday (see also Shipfax). 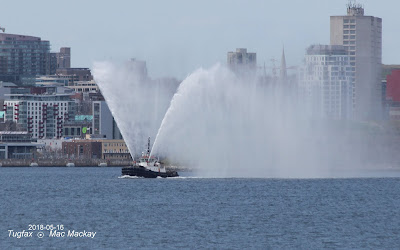 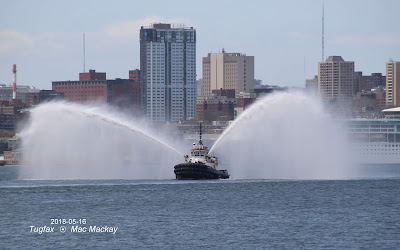 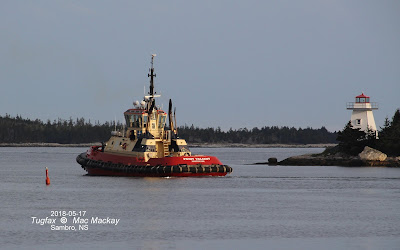 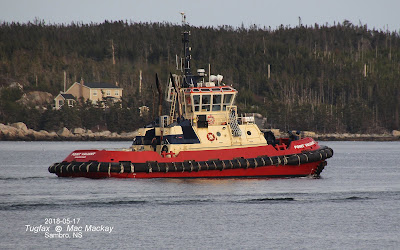 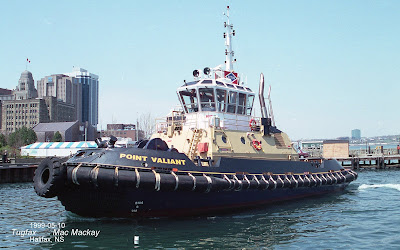 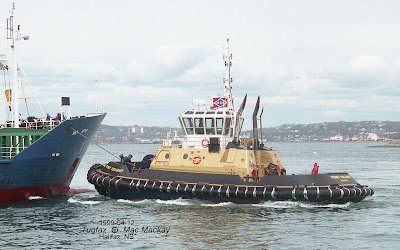 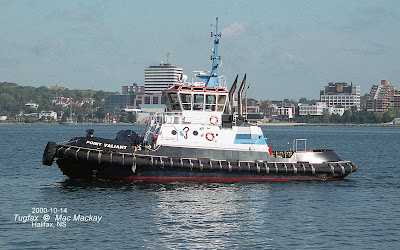 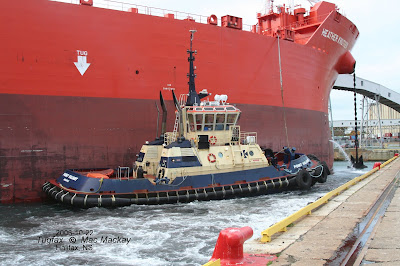 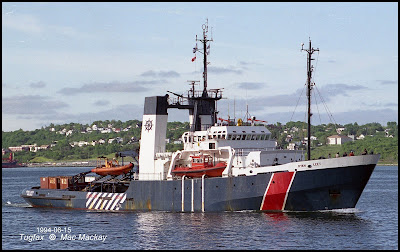 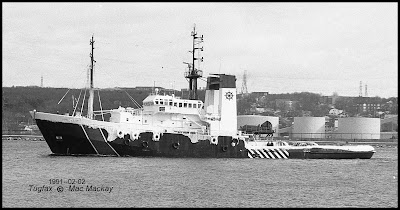 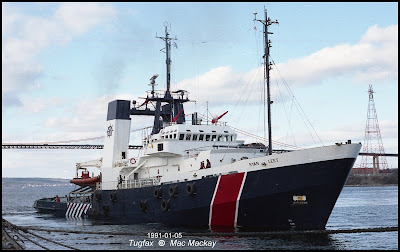 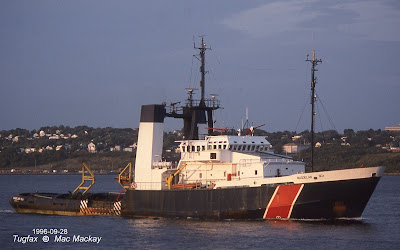 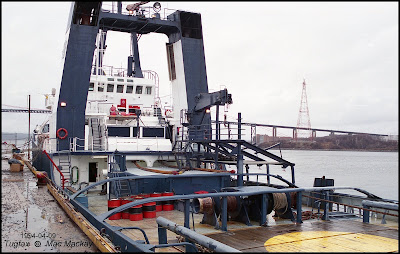 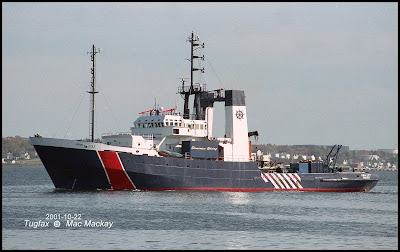