The tug was built by Astilleros Zamakona Pasaia in 2010 as Svitzer Pembroke. A Robert Allen RAStar 3600 design, it is powered by two GM engines of 4083 bhp driving Schottel ASDs. It is rated at a surprising 97 tonnes bollard pull on its forward winch and 105 t BP on its towing winch. Fitted for salvage, towing and offshore work, it also has firefigthing and escort capabilities. Boa Tugs acquired the tug in 2014. 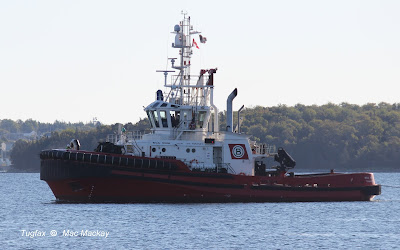 The barge will load the two sections of the panamax floating drydock Novadock. It was renamed  F.D. Novadock under foreign flag, before it was cut in two. The severed sections have now been plated in and will be used as two floating drydocks by new owners in Florida.

Novadock in the background as the tug eases up on its towline.

A Brace of Suppliers

Canadian supply boat operators had no available/suitable vessels to support the operation and have resorted to chartering in foreign tonnage for the work.

Atlantic Towing Ltd has received Canadian Transport Agency OK to bring in two suppliers on bareboat charter from Tidewater for a year less a day.

Sisters Jones Tide and Breaux Tide arrived in Halifax when I was away in August and their registration was changed from Port Vila, Vanuatu to Halifax, effective August 31.
The suppliers were built by Jiangsu Zhenjiang and measure 3,927 grt and 4,578 dwt. 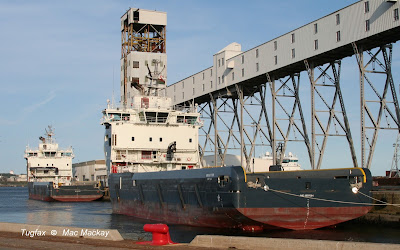 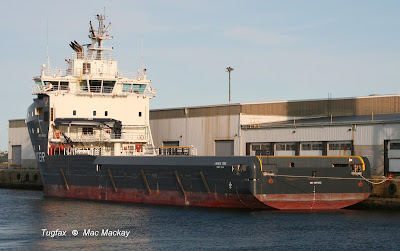 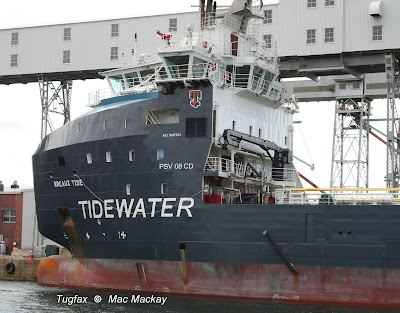 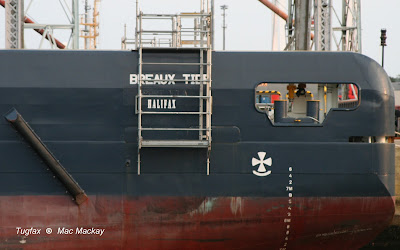 DOF Rederi AS of Storebo, Norway, through their Canadian subsidiary DOF Subsea Canada Corp have brought in Skandi Flora, which was built in 2009 by STX Norway Offshore in Trondheim. It measures 4469 grt, 5005 dwt. 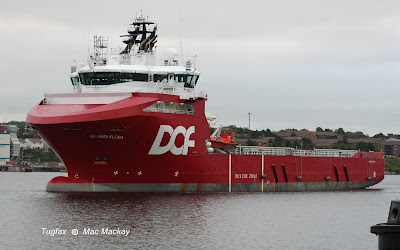 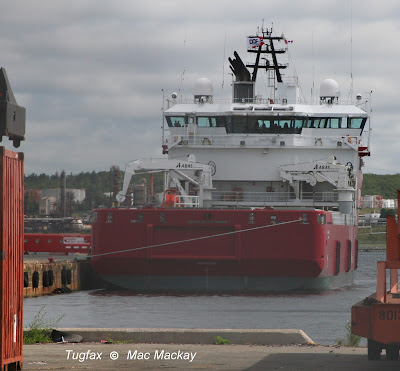 It was registered in Halifax September 3. So far it is the only one of the boats that has moved, but only to shift piers.

They are all still awaiting arrival of the Stena Icemax, which was to start work roughly September 1, but is still reported to be in the Gulf of Mexico.

Oh and the Quiz answer from my last post. That is my friend in front of a giant winch reel in a shipyard in Singapore.