Given good conditions, one tug is all that is needed (and a good bow thruster) to dock a 41,000 grt ship at the Halterm container terminal in southend Halifax. The same maneuver is carried out several times a week and pilots and tug skippers have it down to a science.

Today there was a little less room to swing the ship due to the outbound car carrier Resolve [see Shipfax] but it went off like clock work. 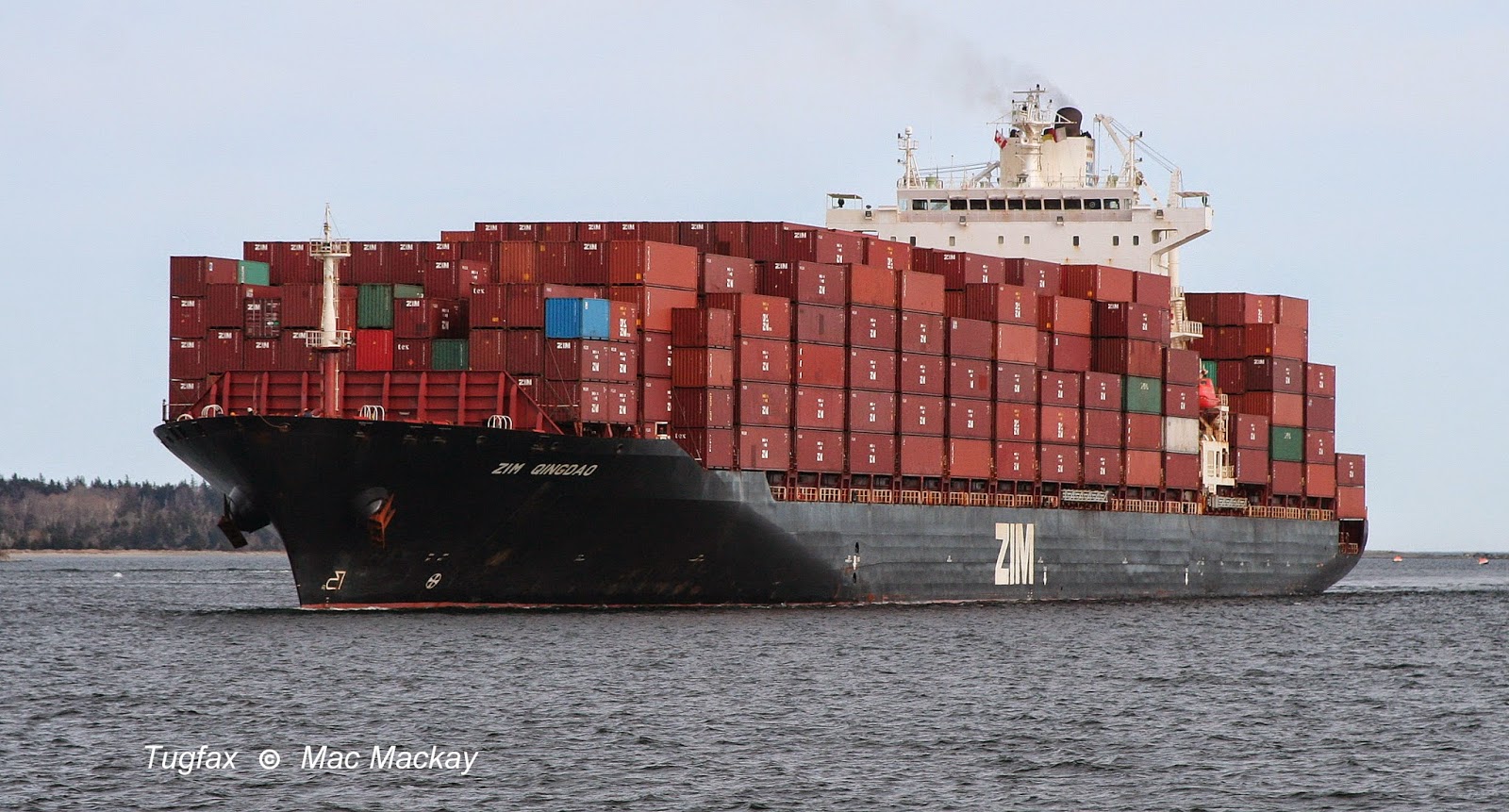 The tug Atlantic Willow has taken up it position on the starboard quarter of the ship (not visible) to assist in swinging the ship almost 180 degrees to tie up at the pier. 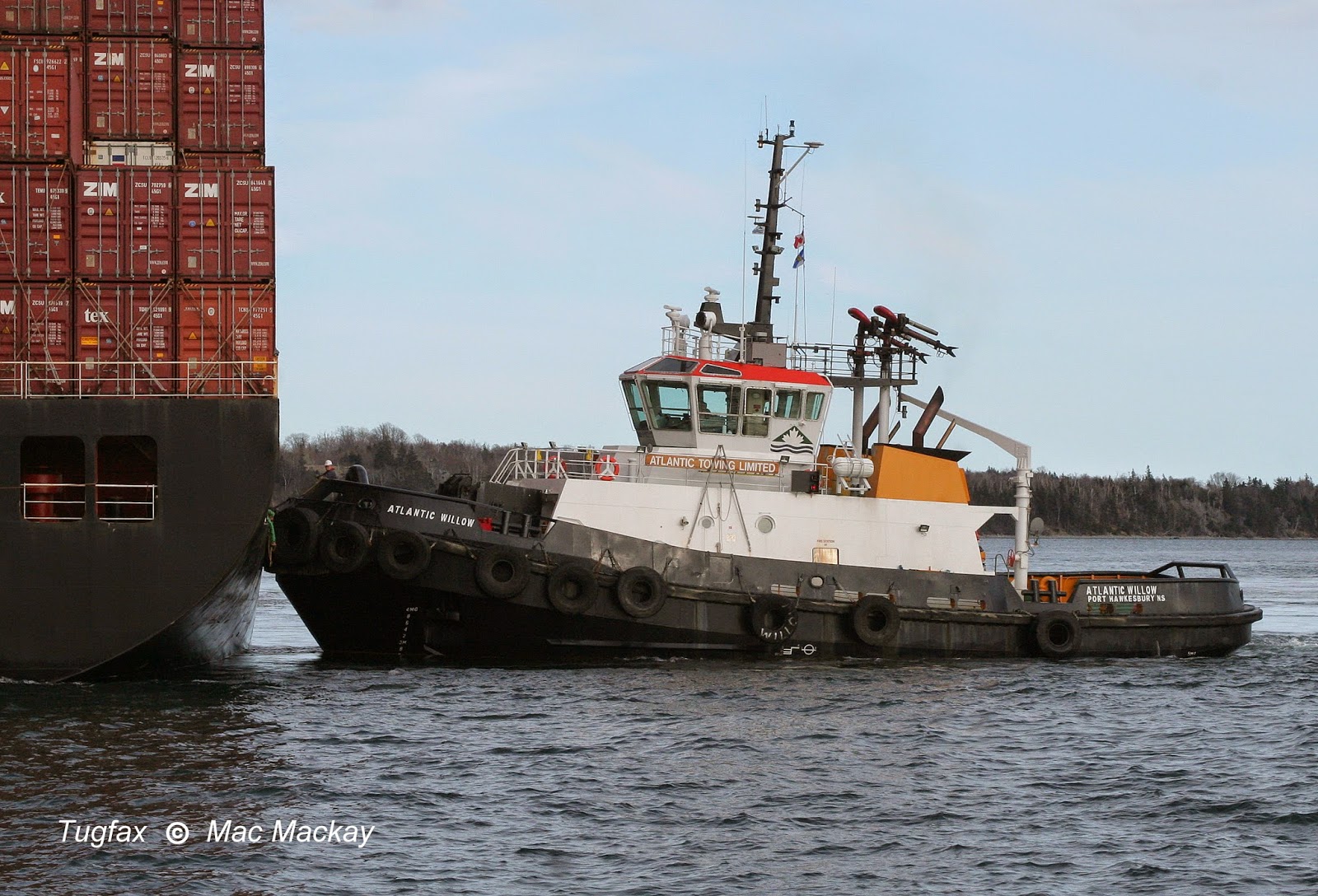 Pushing the ship around using half to full power. 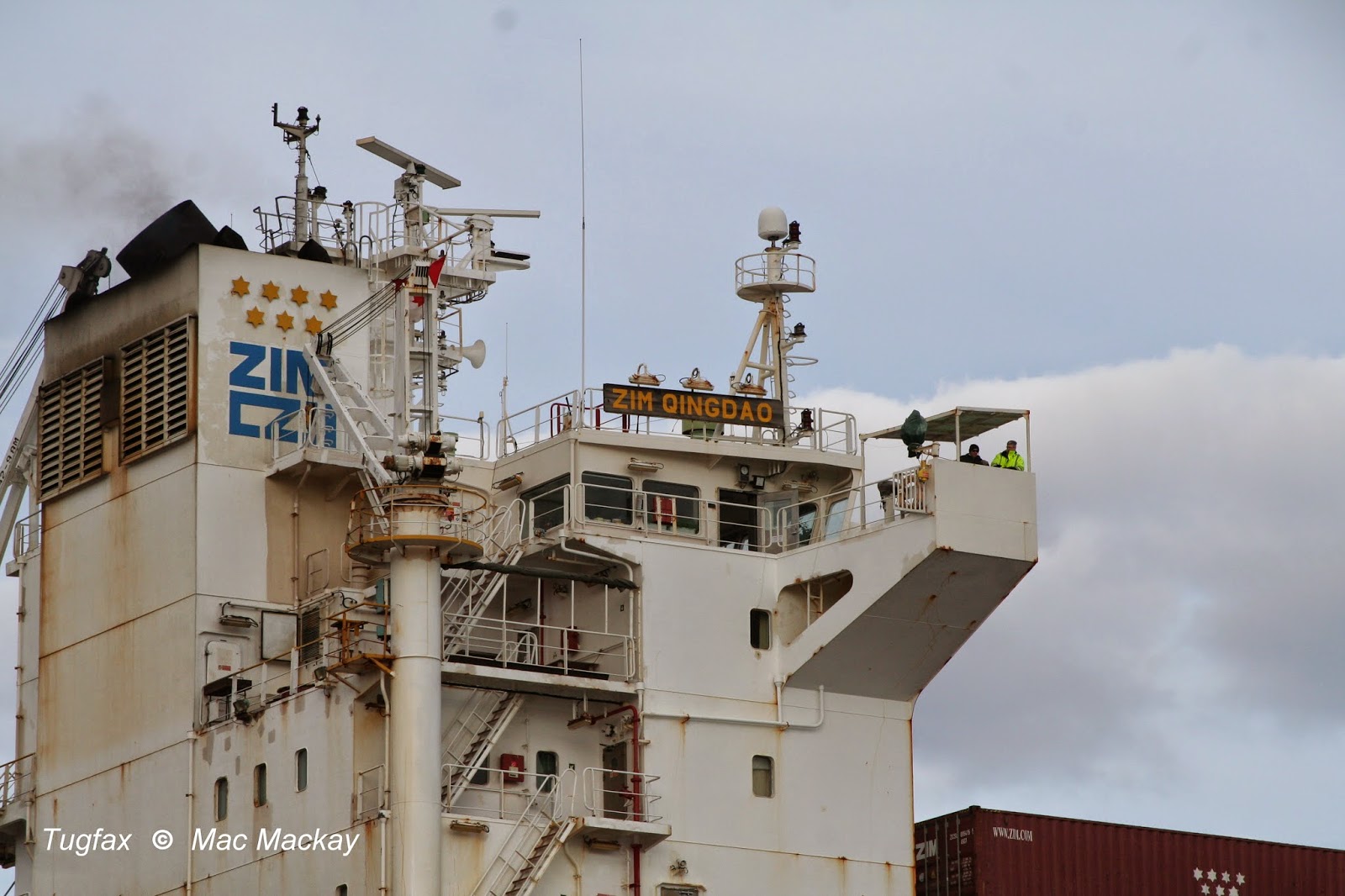 Directing operations from the bridge wing, the pilot judges when the ship has turned enough and orders to tug to come around to the port quarter. 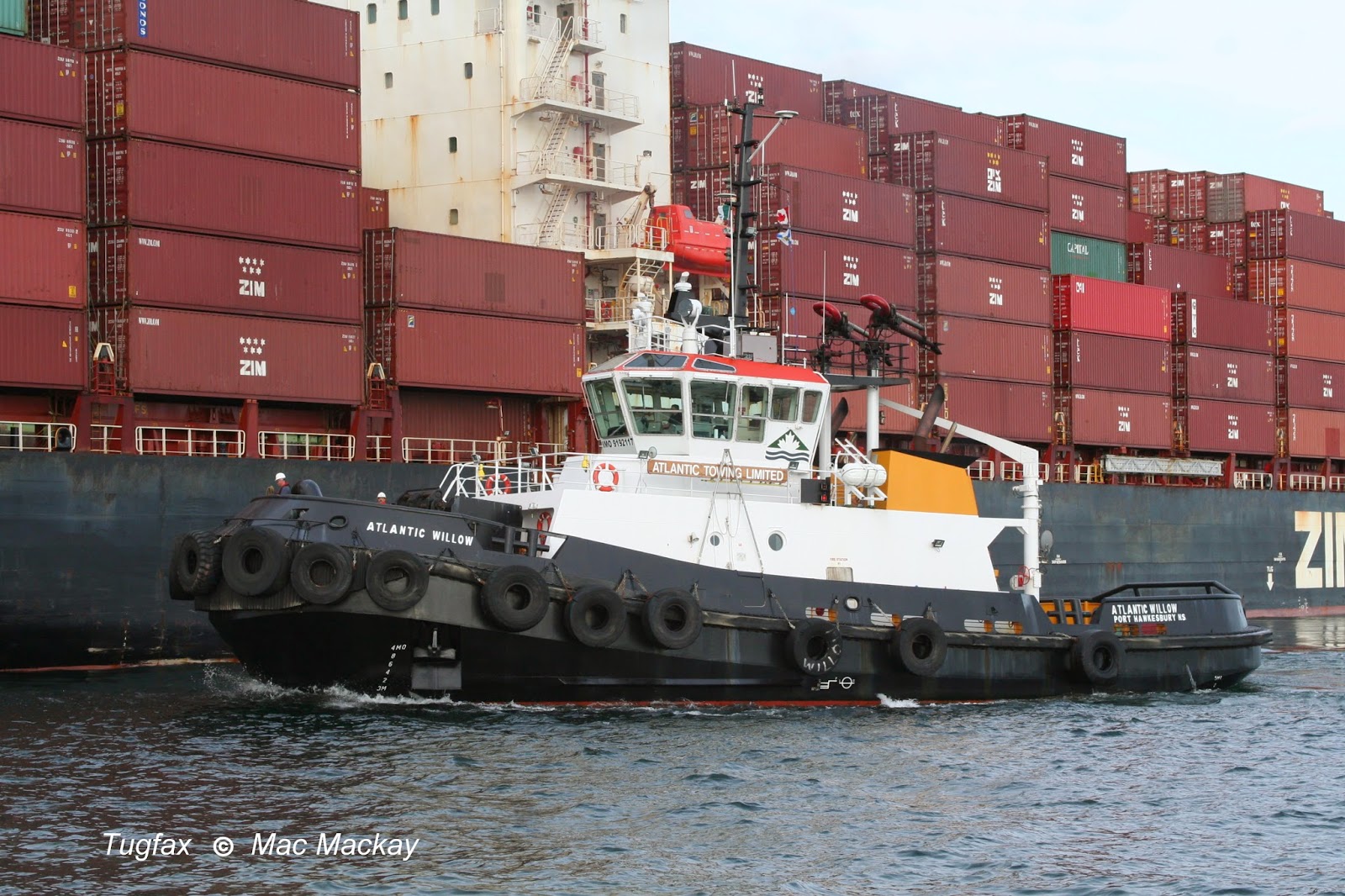 Backing off just enough to clear the ship, Atlantic Willow guns up to run around the ship's stern. 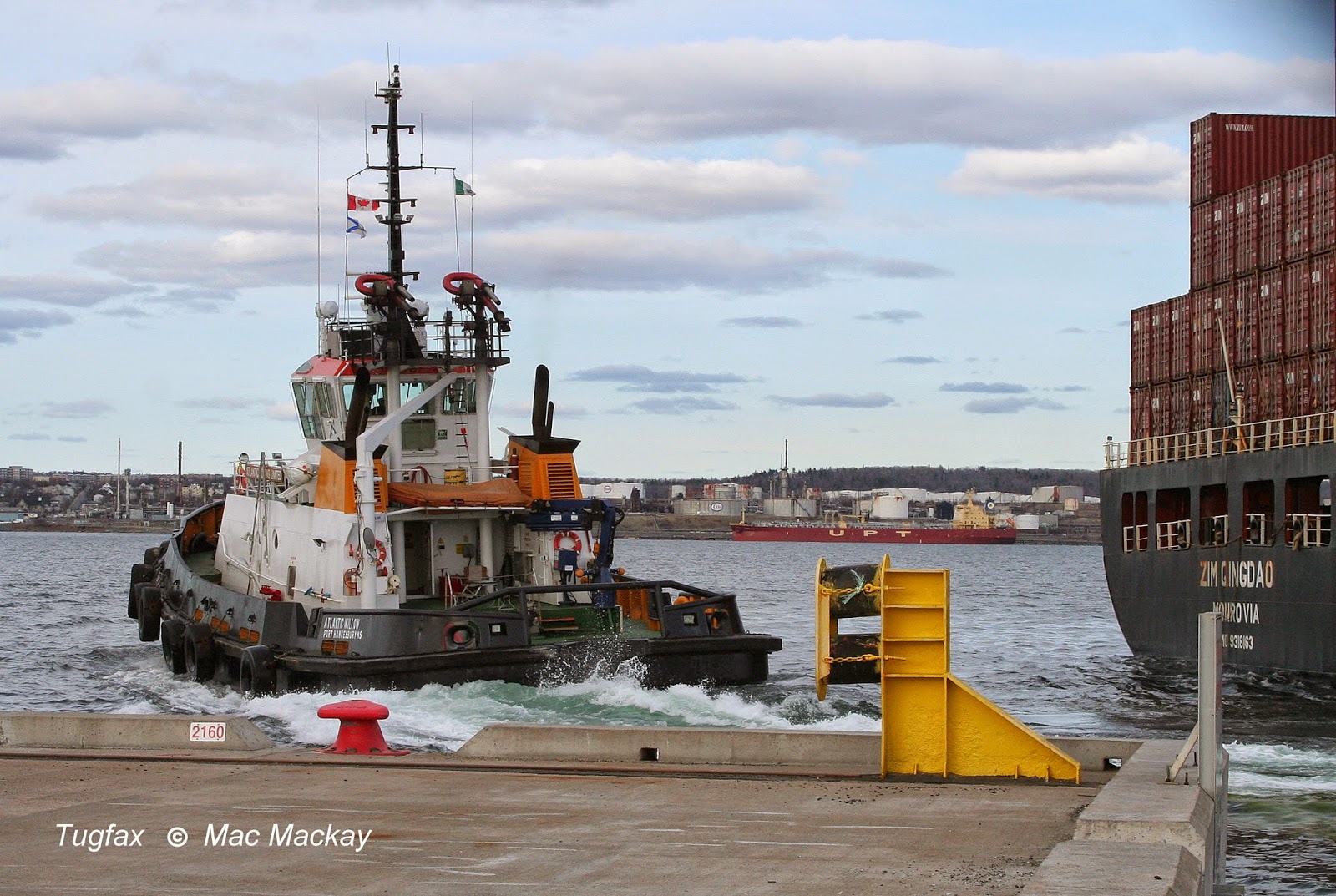 Making the tight squeeze between the ship (which is making slow sternway)  and pier Willow gets clear. 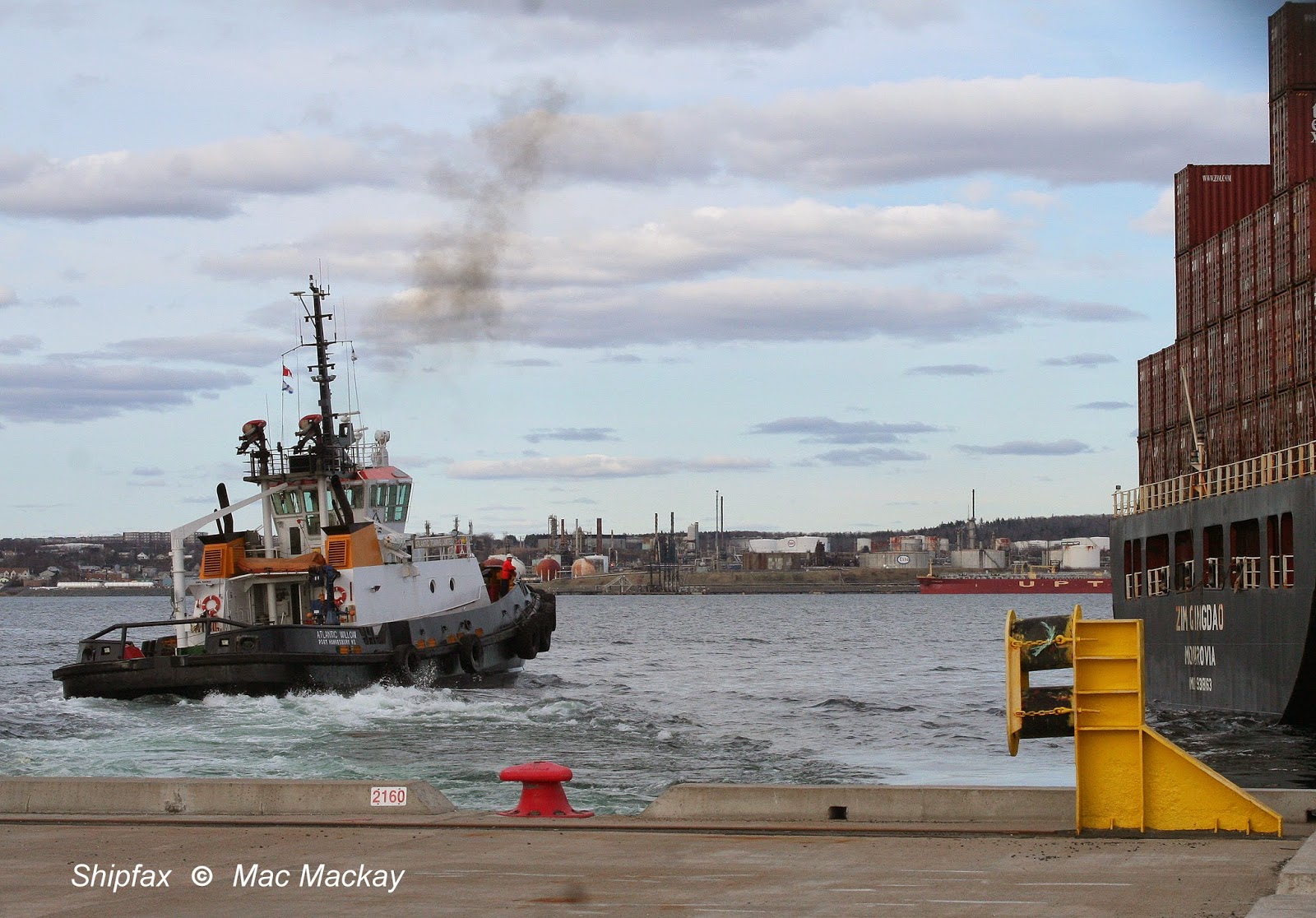 Only the superb handling characteristics of an ASD tug would permit this quick turn. 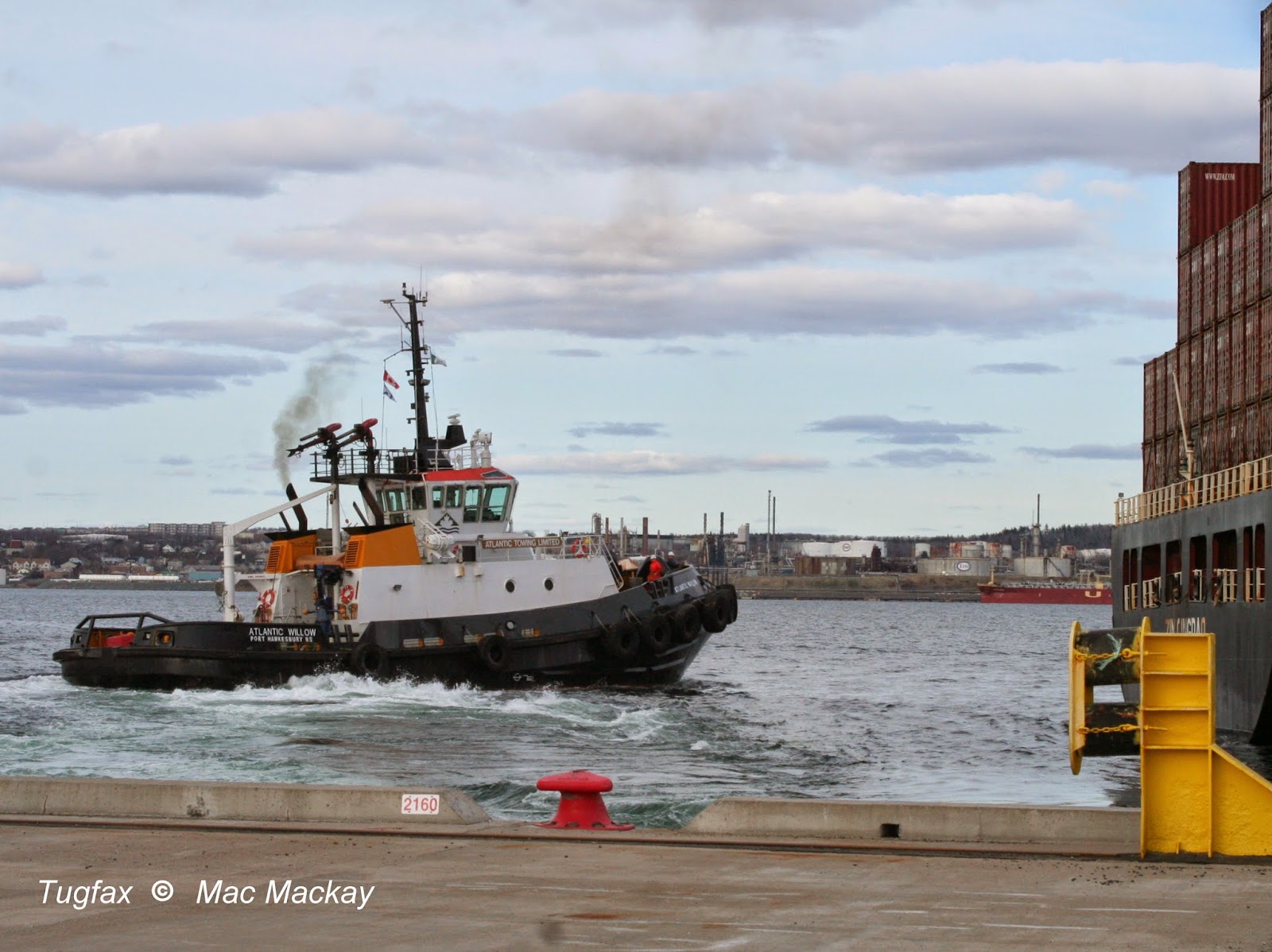 As tug and ship catch up with each other, Willow is concealed from view again, but brings the ship swifly alongside.


Sailing from pier 41, 42 Halterm is usually a much simpler matter, as the ship is headed outbound, and only has to be pulled away from the pier, A stern tug and bow thruster usually do the trick. However in high winds a second bow tug may be called in.


That was the case yesterday as the bar taught bow lines of Zim Panama attest. 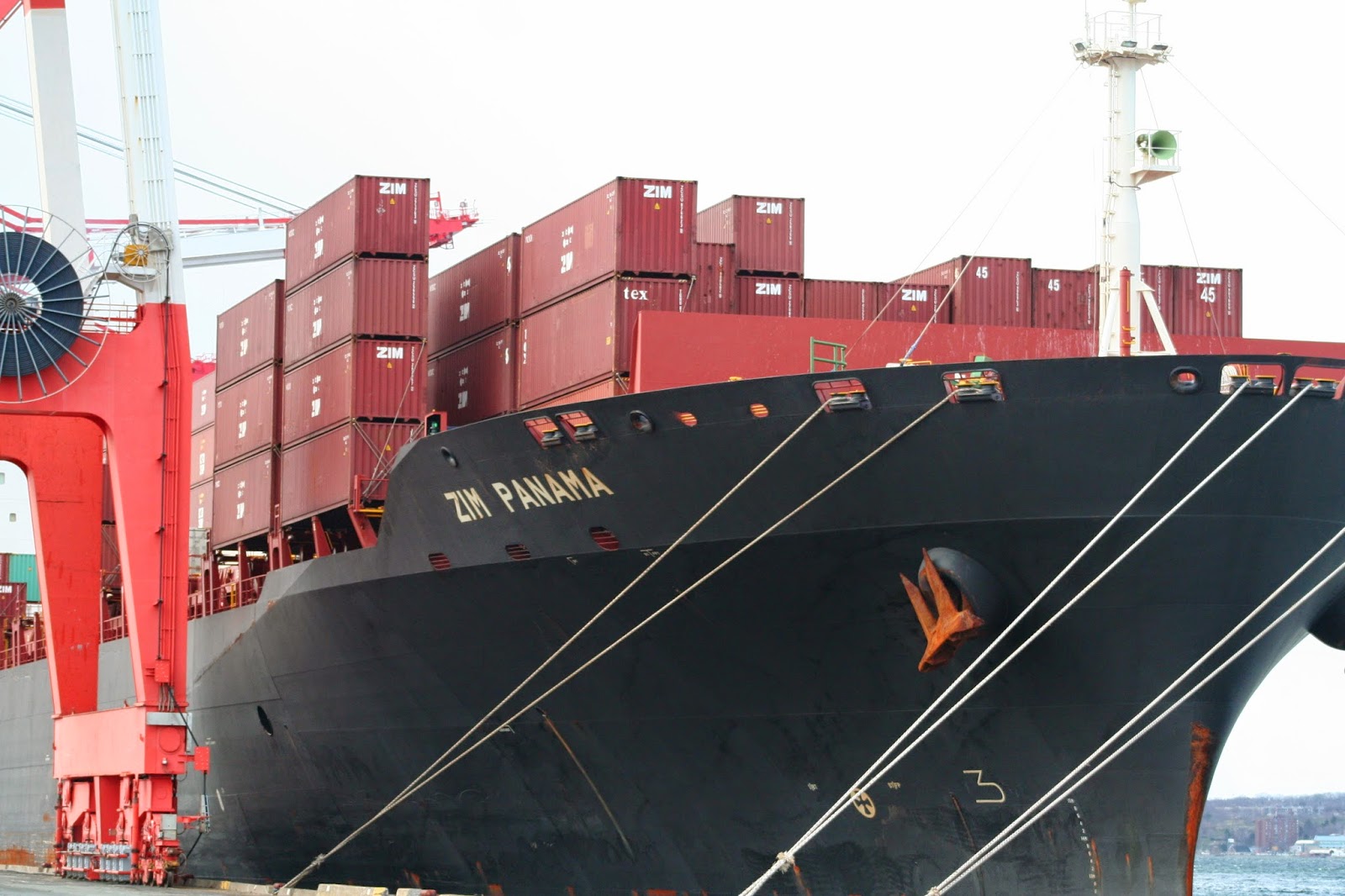 The wind was blowing off the pier so strongly that a second tug was needed to hold the ship alongside until the lines were all let go, and then to allow the ship's bow to fall off slowly, so that its stern did not overhang the pier. 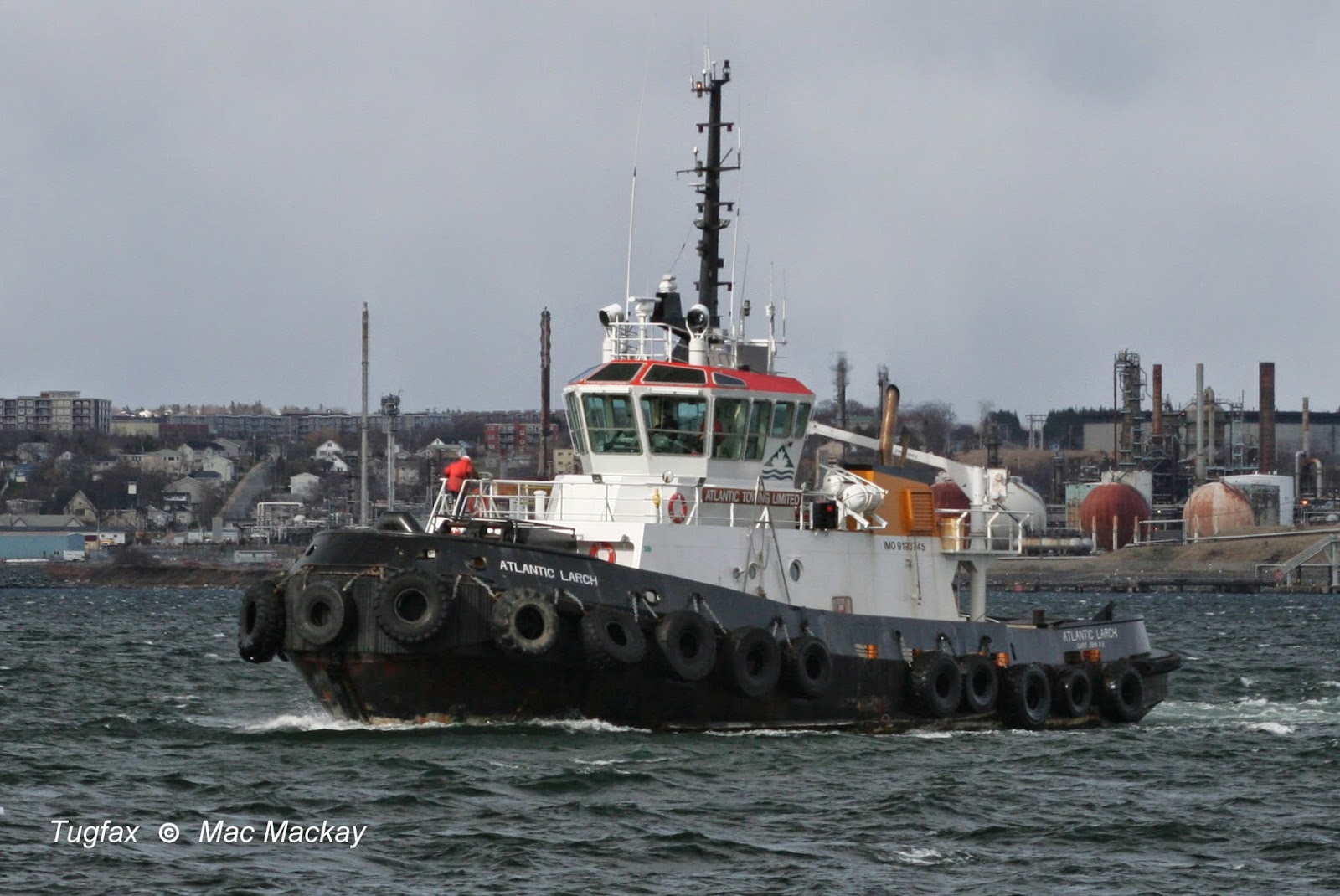 Atlantic Larch comes across the harbour to give a hand.

Ocean Basques will not be with us in Halifax for very much longer. The former Pointe aux Basques  has been alongside the Svitzer Canada dock all winter, awaiting her turn for refit at Industrie Ocean Shipyard in Ile-aux-Coudres, QC. 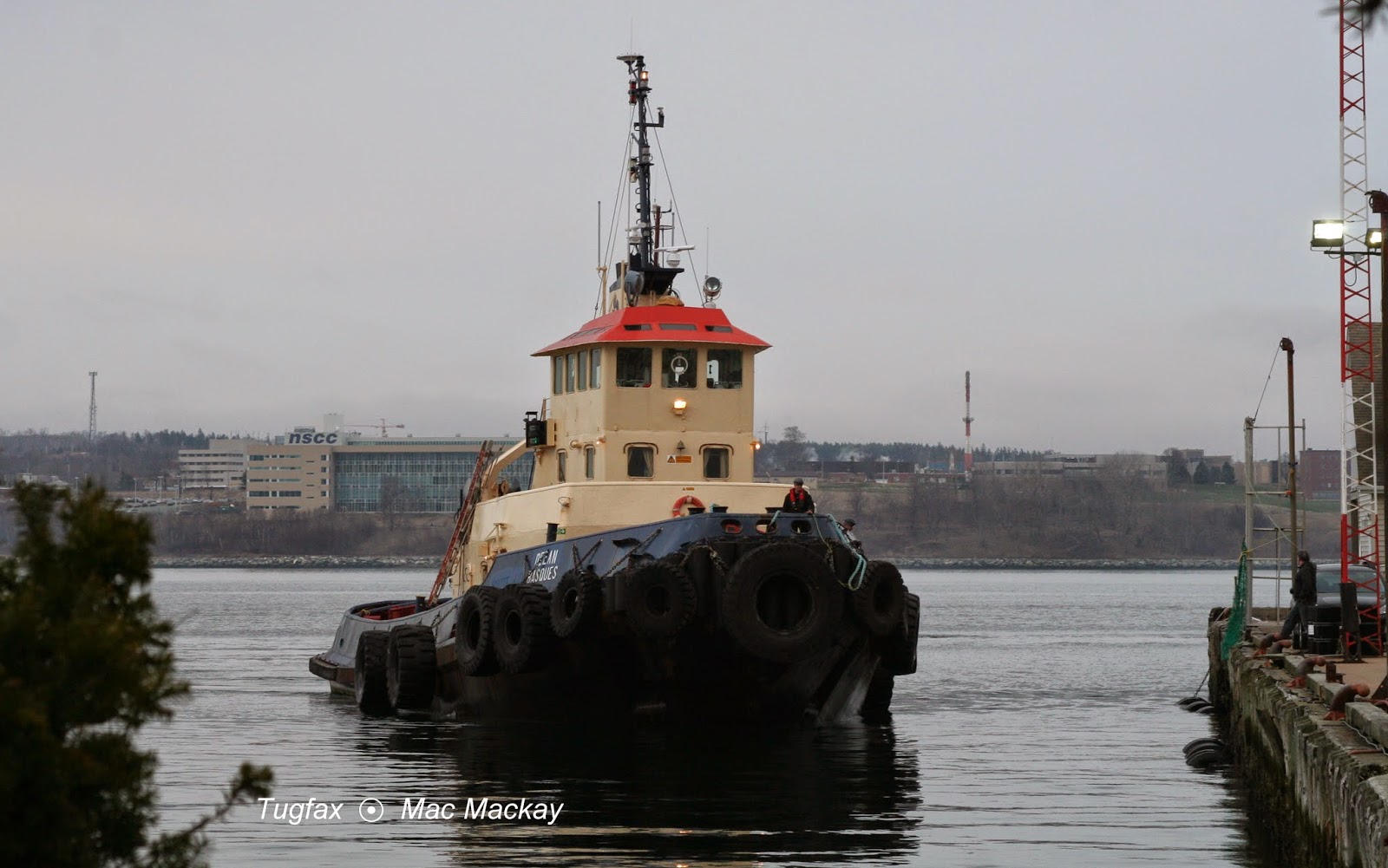 The tug sailed this evening for what turned out to be a sea trial, and returned to the dock for adjustments before the long trip back to Quebec. On completion of the refit, she will likely return to her old home port of Sept-Iles, QC to rejoin Ocean Sept-Iles the ex Pointe Sept-Iles  to continue with ship berthing in the ports of Sept-Iles bay.
This will of course leave the Svitzer Canada dock once more bereft of tugs - a real loss the Halifax waterfront where little commercial shipping activity takes place any more.