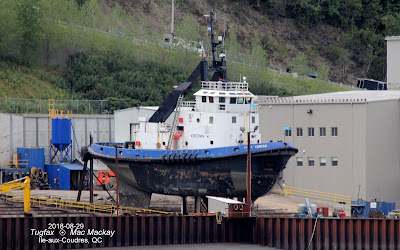 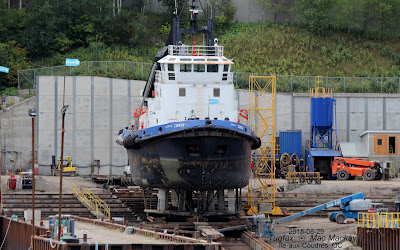 The tug Everlast with its articulated barge Norman McLeod were the cause for some minor excitement off Sorel-Tracy last week. At an early hour August 9 , while at anchor, the barge's anchor cable parted and the the barge drifted aground. 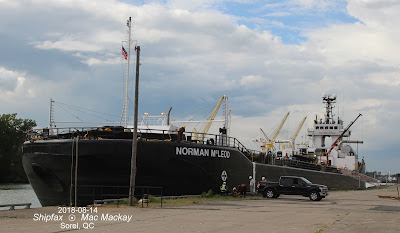 Several workers appear to be admiring their handiwork as Norman McLeod and Everlast lie alongside at Sorel.

The tug was built by Hakodate, Muroran, way back in 1976 as Bilibino for Russian operators and was acquired by current owners McAsphalt in 1996 to be paired with the heavy fuel/asphalt barge Norman McLeod of 6809 grt, built in the same year by Jinling, China. 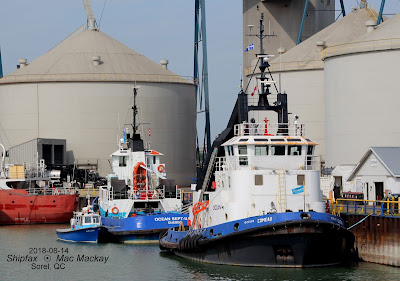 Sorel based tugs, both with former Svitzer / ECTUG ties, wait their next assignments.

Local Sorel tugs (presumably Océan Sept-Iles and Océan Comeau soon freed the barge. There was no damage. There are conflicting reports as to whether the anchor and chain were recovered or not, however when I happened by August 15, the barge had been re-equipped with an anchor (it carries only one) and sailed later in the day for Detroit (or perhaps Windsor). It regularly works through the Seaway making transits on average every ten days to two weeks.

Despite being business competitors, Canadian tug operators often work together, with short term chartering of each others' tugs depending on need.

Currently Groupe Océan is employing the McKeil Marine tug Lois M. On Monday, the Lois M. went down river from Quebec City to Ile-aux-Coudres to fetch the tug Océan Charlie from the Industrie Océan shipyard and towed it back to Quebec City. 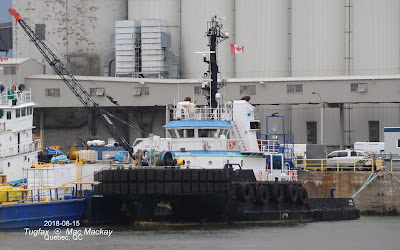 Lois M. tied up at the Océan jetty in the Outer Bassin Louise. 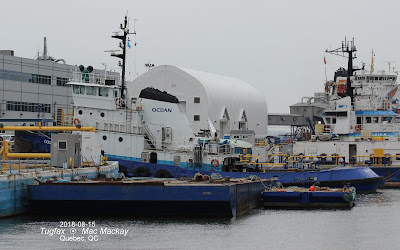 Océan Charlie fresh from the shipyard, but not back in service yet.

Lois M. is set up for towing, and therefore may be substituting for Océan Tundra which has been sent to Milne Inlet. This unexpected trip was likely brought about by the breakdown of Océan K. Rusby, which had a thruster failure. Of course Océan Tundra was built for service at the Baffinland port but has never been there until now.

The next few days may be very busy for Océan as the second re-floating attempt for the grounded Umiavut [see Shipfax] is due for August 16 or whenever lightering operations are completed. The first attempt used the tugs OcéanClovis T. from Quebec City and the Océan Intrepide from the Montreal fleet.

Also fresh from the shipyard, Duga was in Quebec City oin Monday, but has gone on now to Trois-Rivières, its traditional home port, but it has recently been based in Sorel. 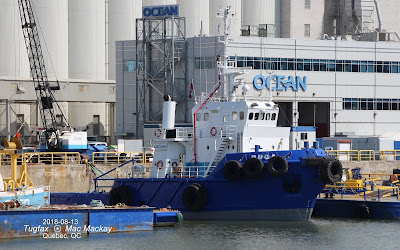 Duga tied up at Océan's ship repair unit in Quebec City, newly refitted and readying to go back into service.
.