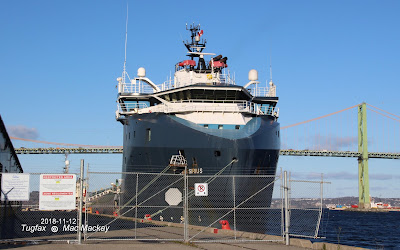 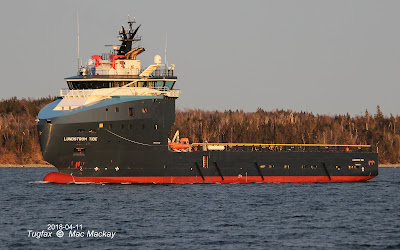 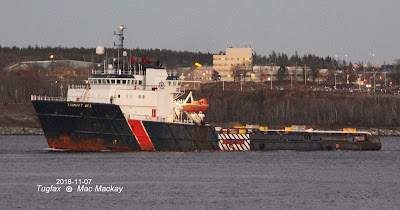 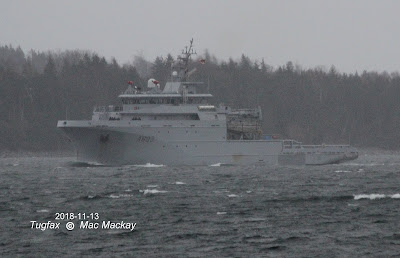 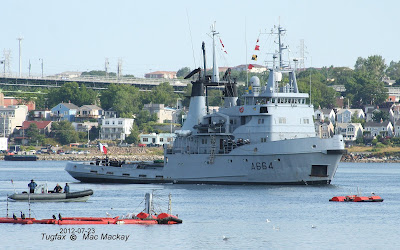 Theodore Too arrived safely back in Halifax this morning - still wearing a smile. 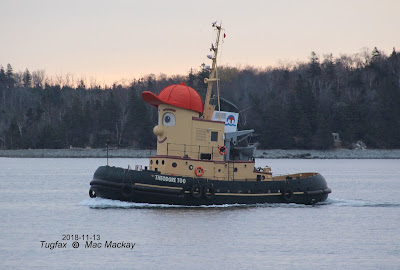 After encountering some mechanical issues on its return from Saint John, the vessel had repairs in Meteghan and then made the long haul around the southern tip of Nova Scotia and back to Halifax, where it tied up at the Svitzer Canada dock.  This was a temporary stopover, before moving on to its winter residence at Mill Cove in Bedford Basin.

We don't report fake news at Tugfax but we do report news about fake tugs.Our favourite fake tug being of course Theodore Too, that well known tourist attraction built as a life size version of a tiny tug from the children's television series of the same name.

Much to the disappointment of many, the "tug" was transferred to Saint John. NB for the 2018 summer season, where no doubt it entertained many, including cruise ship passengers. On November 2,  with the end of the cruise ship season, it was en route back to Halifax when it had problems with its gear box in the Bay of Fundy. Not a nice place for any vessel to have a problem. It called for assistance from the CCGC Westport, the Coast Guard lifeboat stationed at the port of the same name on Brier Island, at the end of Digby Neck. The Westport towed Theodore Too through Petite Passage, then on the Meteghan, NS where repairs could be made. 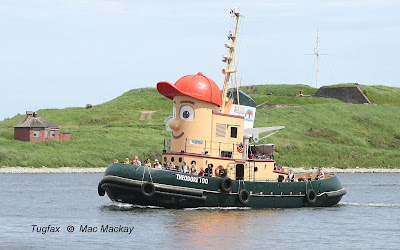 Theodore Too sails past George's Island where a building "keeps its eyes" on the channel.

Several charming newspaper accounts wrote of Theodore Too as a living thing - a rare example of anthropomorphism in journalism, but somehow appropriate under the circumstances. However the situation could have turned ugly and I am sure that the master of the boat, a seasoned seafarer, acted with excellent judgment in calling for assistance in a real emergency.

High winds since the incident have likely prevented the boat's return to Halifax (or possibly Lunenburg).

Another vessel, that might not be classed as a tug by some, has left Halifax for Newfoundland - and probably not on its own hull. Since it is fitted with towing bitts, I can classify it as a tug, though it did not see much service in that role. 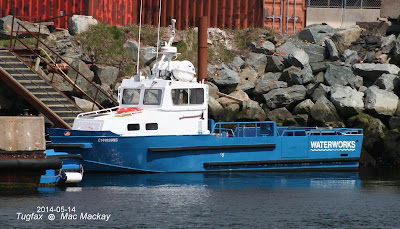 Walrus at its usual berth in Woodside, with its registration number (painted incorrectly, with an extra "1" ) on the bow.

Registered under the small boat category, it did not have an official name, but a registration number: C14939NS. It was owned by Waterworks Construction Ltd of Dartmouth and was usually seen tied up at their facility next to the Woodside ferry terminal. It was known as Walrus but that was a purely unofficial name, and may even have been inherited from its original owners, believed to have been some branch of the Canadian government. It has an aluminum hull, and is credited with 540 bhp, but that seems excessive. 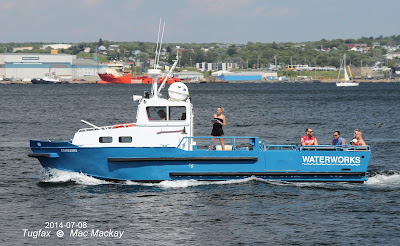 Out for a pleasure cruise - one of the few times I saw Walrus in action.
New owners are P.D.Industries Ltd of Cape Broyle, NL. a small community on the Avalon Peninsula, about midway between St.John's and Cape Race.