Quebec City based Groupe Océan has apparenty sold its four older units to the Georgetown, Guyana company BK Marine Inc. (The company is part of the huge BK Group, a conglomerate of transportation, construction, and infrastructure operations.) The tugs have been inactive for some time, but have been maintained in  "warm layup". All four are veterans, and can be expected to see a few more years of service in the Caribbean /South America.

Ocean Echo II , previously covered in this blog May 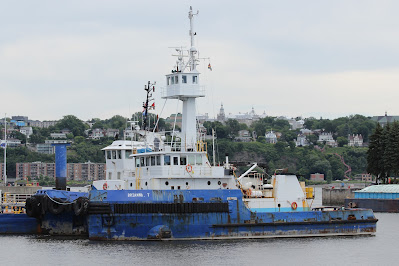 Now renamed Brianna K the tug is tied up in Quebec City with fleet mate Océan Basques which has been renamed  Bradley G.

The Océan Basques has also been covered here numeorus times, including my September 2014 post.

Océan Echo II and Océan Basques at the Industrie Océan shipyard in Ile-aux-Coudres in 2014. Both are twin screw tugs.

BK Marine has also acquired the Avantage, now renamed Kane G. I speculated on its potential sale, also in May 2022. 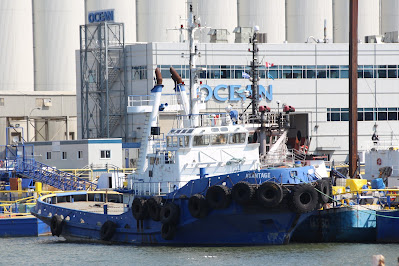 The fourth and final tug is Mega - not so far renamed, and presumably its barge Motti as well -both of which remain laid up in Sorel-Tracy, QC.

The Brianna T ex Océan Echo II is fitted  with hydraulic rams for articulated tug/barge work, and Mega is also paired with its barge, Motti and it is likely that BK Marine has found work for such combinations. Bradley G ex Océan Basques is a powerful twin screw tug, and could be an asset in the right place (but won't need its ice breaking abilities in Guyana).  Kane G ex Avantage as a low powered single screw tug is a little harder to figure, but perhaps in an "en bloc" sale, it was part of the deal.

So far no sailing dates have been posted, but the tugs in Quebec City are flying the Guyana flag, and have their new names painted on.