Winding down? Over the next few days I will be preparing to take off on my yearly break from computers, e-mails and thus my postings to Tugfax. I expect to back at the keyboard in September. 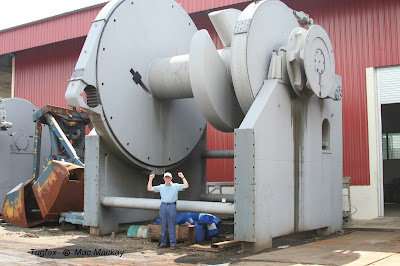 After successfully handing off its tows (see Shipfax) the tug Océan Arctique passed Halifax Shipyard where it was completed and transited the Narrows to pier 9C to spend the night and take on fuel. 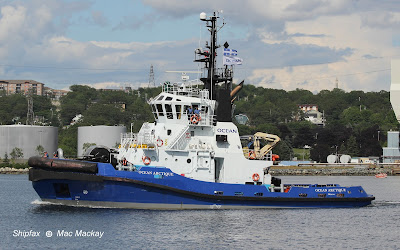 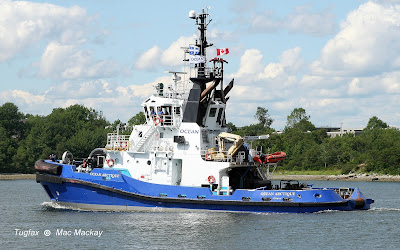 After fueling the tug will proceed to Sept-Iles where it will re-join it sister tug Océan Stevns to provide tug services under the contract with the Iron Ore Company of Canada.
Much more than a harbour tug, it is fully fitted out for towing including towing winch and stern roller. It also has a knuckle boom crane and carries firefighting monitors.

Return (with some corrections)

In a somewhat surprising return to Halifax, the tug Océan Arctique, which has had its own strange career,  is due July 28 towing two barges.


Originally the second of a two tug order from Nordane Shipping of Denmark, construction of the tug began in 2003 at the Ile-aux-Coudres shipyard of Industrie Océan. Unfortunately, due to issues related to construction of the first tug in the order (Stevns Océan) the yard had to re-organize. This tug was therefore launched September 16, 2004 as a shell only. 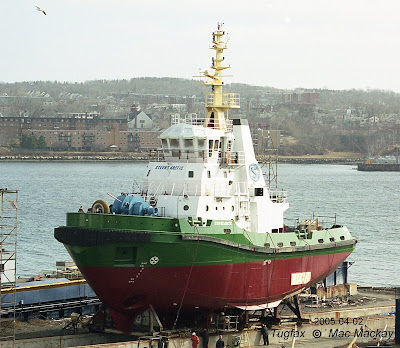 Irving Shipbuilding, which was also building tugs for Nordane, took over the shell, and Atlantic Teak towed it to Halifax. The tug was hauled up the old launchway at Halifax Shipyard, where its superstructure was removed. The two halves then moved into the old building hall where it was completed at Stevns Arctic.It  re-launched April 8, 2005 and sailed for Denmark in September 2005.

In a surprise move, Groupe Océan acquired the two tugs on a charter arrangement when they took over the tug contract for the Iron Ore Company of Canada in Sept-Iles, QC in 2013. The two sister tugs arrived in company at Ile-aux-Coudres, QC, August 7, 2013. Renamed Stevns Océan and Océan Arctique they were are stationed at Sept-Iles, but the collapse of world iron ore demand resulted in the reassignment of Océan Arctique to general towing and winter pilotage work in Quebec City. [Turns out that  Océan Arctique was in Quebec for repairs and is still based in Sept-Iles, although temporarily replaced by Océan Yvan Desgagnes.] 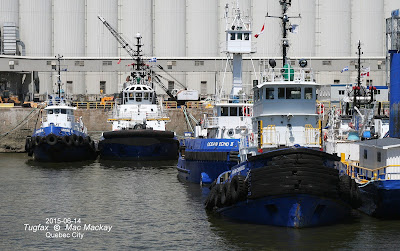 Left to right: André H. Océan Arctique, Océan Echo II, Océan Charlie. Note the gangways in stalled on Océan Arctique's deck house, similar to those on Océan Charlie. These are used for winter pilot boarding at Quebec City Sept-Iles, which keeps the pilot well above the level of any ice in the river bay. Stevns Océan has been similarly equipped.

Adding to the surprise factor, its arrival in Halifax again, is the nature of the tow. More of that will be covered in Shipfax on the day.

A rash of tug sinkings in the past year has left the Canadian taxpayer on the hook for big bucks.

In July 2014 the former RCN tug St.Charles, later Chebucto Sea, but since 2012 carrying the unlikely name of Matterhorn sank at her berth in Mount Carmel, NL and remains sunken and leaking petroleum. Its registration was suspended July 31, 2014.
The Coast Guard has finally become fed up with the Owner's lack of action in cleaning up and raising the vessel and have issued an ultimatum (now past) . The Coast Guard will do the clean up and bill the owner, but so far have indicated that they will not be raising the wreck - that is up to the owner. 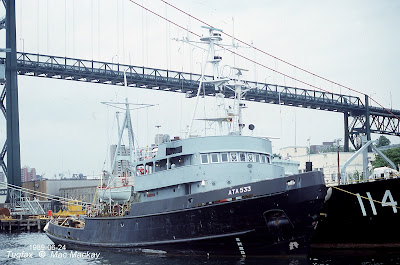 Believed to be associated with another Newfoundland tug owning concern, the owner is a single ship company and may well be able to dodge the bullet and get out from under the obligation by walking away.


That is certainly the case with Chaulk Determination, the former Commodore Straits and Haida Brave, which  sank at Trois-Rivières, QC December 26, 2014. Its owner claimed an inability to pay for cleanup. The Coast Guard hired Groupe Océan to raise the wreck, which they did most capably, but the $1 million plus tab was picked up by the taxpayer. 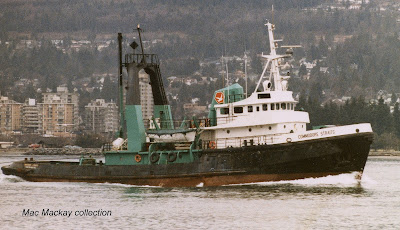 It has recently been announced that the tug will be towed to Matane, QC and broken up by Méridien Maritime - again at some cost to the taxpayer.

The most recent sinking of a tug and workboat in Cornwall, ON, will have a happier outcome at least for  the taxpayer anyway, since the owners have acted responsibly and stepped up to the plate with their salvage plan and have begun work to raise Lac Manitoba and L.C.M. 131 which capsized in turbulent waters June 22.

It is not yet clear if either vessel will be worth repairing after they are raised. Lac Manitoba was built in 1944, and rebuilt in 1999. The former TANAC tug was operated by Nadro Marine an affiliate of McKeil Workboats. The latter company has taken charge of the salvage. L.C.M. 131 is a landing craft type workboat operated by West Front Construction Ltd which had voluntarily come to the assistance of Lac Manitoba when it was overwhelmed and sank nearby.

End of the Line for May C

It is not often that I report on a tug being scrapped, but such is the unfortunate news regarding the small tug May C owned by Aecon Atlantic Industrial Inc, (previously known as Aecon Fabco) operators of the Pictou, NS shipyard.. I have just received photos from a reader showing the tug cut up at the shipyard. 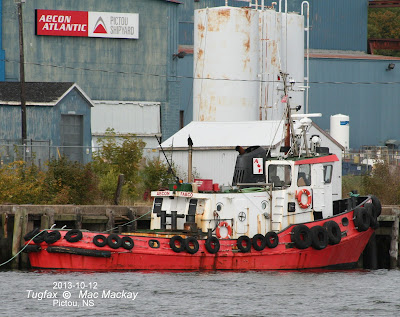 Built in 1972, the tug is not old by Canadian standards, and it had been re-engined. It only passed into Aecon's hands in 2011 and it did not see extensive use. It looked pretty good, superficially, when I reported on it as recently as April of this year:
http://tugfaxblogspotcom.blogspot.ca/2015/04/may-c-gets-spa-treatrment.html

Even as late as June 20 it still appeared intact, but remained hauled out at the shipyard. There must have been a severe problem with the tug to warrant such a drastic solution.

I also covered the tug's history in a post in 2011 when it was operating as Mary Steele for Superport Marine Services Ltd of Port Hawksbury, owners from.1996. 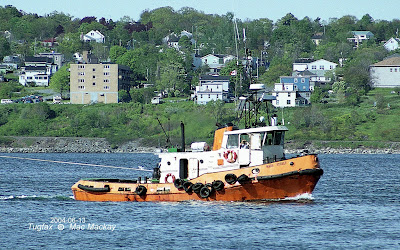 Its longest tenure was with the federal Department of Public Works as Tignish from 1981 to 1996. 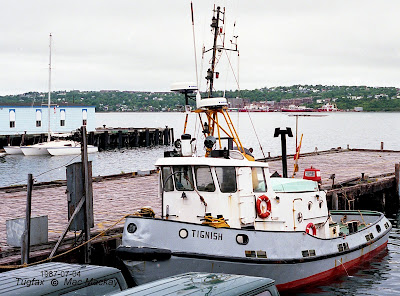 Tignish often tied up at the Queen's Wharf in Halifax - much has changed since then. 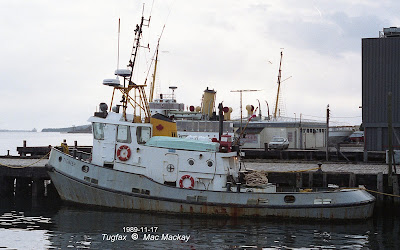 With the retired CSS Acadia in the background - both were members of the "buff funnel' fleet of Canadian government ships.
It was built as Jacques Rochette and renamed Techno-Rochette in 1975.


Perhaps Aecon will build a new tug for themselves, but I have no news on that front yet.

Off to the north

Svitzer Nerthus and Svitzer Njal sailed early this morning for Milne Inlet, Baffin Island to take up their new duties, ship berthing at the Baffinland Iron Mine project. 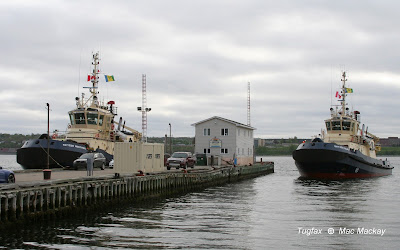 (Photo taken 2015-06-04, when the tugs arrived from Denmark, the container on the dock has been loaded on the stern of Svitzer Njal)

The timing of their departure was related to the departure from Turkey of the first ship scheduled to load iron ore this season. (Believed to be Federal Tiber)
The ship and tugs will rendez-vous off Milne Inlet, which is still blocked by ice, although the port itself is clear. Icebreaker assistance is expected to clear the entry to the bay.

There is still no word on what the tugs will be doing after the end of the shipping season in Ocotber.

Atlantic Towing Ltd's three Halifax based harbour tugs usually go about their business without much fanfare or notice Occasionally they do get to show off. 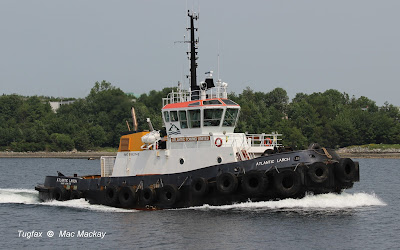 Atlantic Larch looks very business like as it returns to its base after undocking a ship on Saturday. The 4000bhp tug was built in 2000, and is fitted with a towing winch. Despite pushing a lot of water it leaves very little wake. 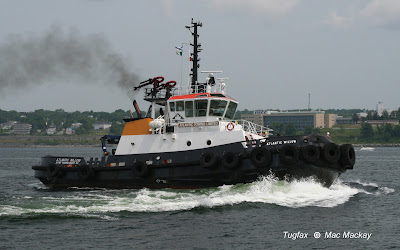 On Saturday afternoon Atlantic Willow did a couple of high speed 360 degree turns to the delight of harbour watchers. Also of 4,000 bhp, it was built in 1998 and is fitted with a towing winch and firefighting monitors. On Friday evening Atlantic Oak escorted Queen Mary 2 on its ceremonial departure from Halifax commemorating the 175th anniversary of Cunard's first transatlantic steamship crossing. A 5,050 bhp tug built in 2004, it does not have a towing winch, but is equipped with an array of firefighting equipment.

The tugs Svitzer Nerthus and Svitzer Njal took fuel in turns today. Both tugs moved from the Svitzer wharf to Pier 9C, where the fuele was delivered by RST tanker trucks.

Both tugs are now sporting "Halifax" on their quarters as port of registry, as both tugs were registered in Canada June 9. (They had been flagged to St.Vincent and the Grenadines for their delivery from Denmark.)
Also a suggested name change has not been made on either tug (yet). 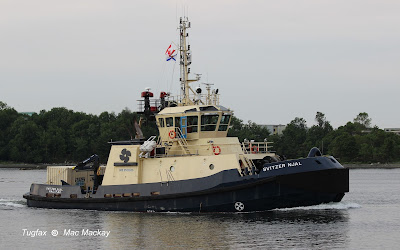 Svitzer Njal has fueled and is returning to the Svitzer dock.

Svitzer Njal has been loaded with a special Svitzer container holding shore supplies for their new base on Baffin Island, so a sailing date must be nearing. 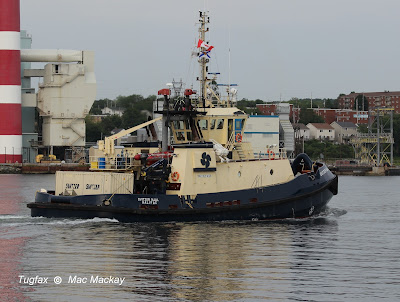 Much travelled tug heads for the Lakes

Passing Halifax today en route to a new home on the Great Lakes, the tug Susan McAllister would have  many stories to tell if it could talk.

Built in 1965 by the Equitable Equipment Co it was orginally named Vincent J.Robin IV for Robin International. It moved on the Crescent Towing of New Orleans as Betty Smith before going to work for Sea Containers as Seaco Enterprise. In 1997 it was acquired by Bay Transportation of Tampa and renamed  Leo. The next year Hvide Marine took over Bay and renamed the tug Ybor. 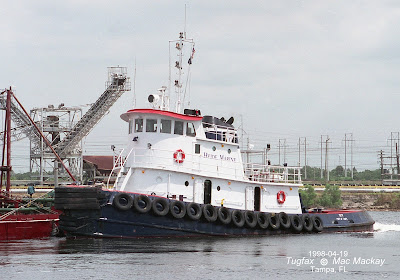 As Ybor the tug handled a refueling barge in Tampa. FL.

The next year it was sold again to Capt. Arthur Fournier of Portland, ME who renamed it Capt. Sweet. When Fournier sold Portland Tugboat and Shipdocking Co to McAllister Towing in 2001 the tug took the name Susan McAllister. It is now bound for Cleveland, OH for Great Lakes Towing Ltd.

The two screw tug is rated at 2400 bhp with tow Cats and has a diesel powered towing winch.