Gulf Spray back at work

The opening of the cruise season in Halifax (see Shipfax) also means the start of the busy season for the tug Gulf Spray. The small tug handles scows that remove waste from cruise ships and will be kept occupied until the end of October. 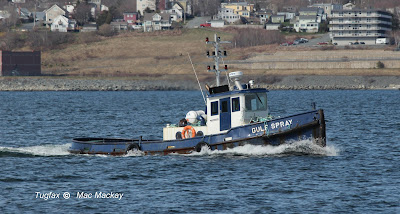 Gulf Spray trots along light at hull speed, bound for the cruise ship Veendam at Pier 22.

Full out, the tug wrangles a pair of scows with assistance from its companion motorboat (a small tank scow is barely visible on the offside of the larger scow). Working in a stiff breeze, the tow is going more sideways than in the direction of Pier 9A where the various waste products will be landed for disposal.

Gulf Spray was built in 1959 by Ferguson's Industries Ltd in Pictou for shipyard work. Brought to Halifax and rebuilt in 2007, it was badly damaged in a storm in 2014 and partially rebuilt.

Despite gale force winds out of the north, the big boxship CMA CGM Almaviva berthed at the Halterm container terminal in Halifax without incident today. It was a smooth operation thanks to the an expereinced pilot and the crews of two Atlantic Towing Ltd tugs. 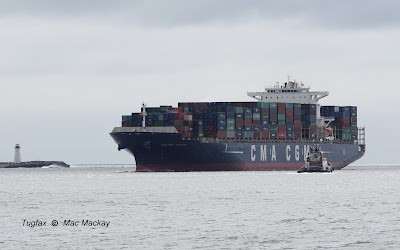 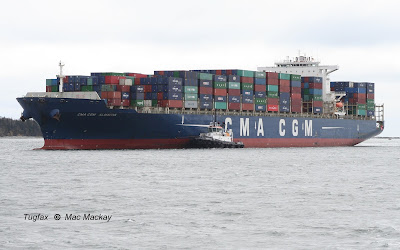 It then takes up its position at the bow, making fast to a sunken bit, helping to slow the ship down. 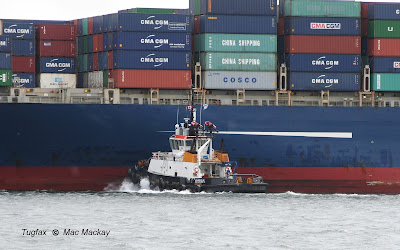 It then moves in position to push the ship's bow around, assisted by the ship's own bow thruster. 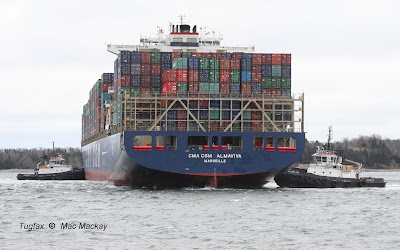 Atlantic Oak has been pushing at the stern of the ship, pivoting it about its centre. 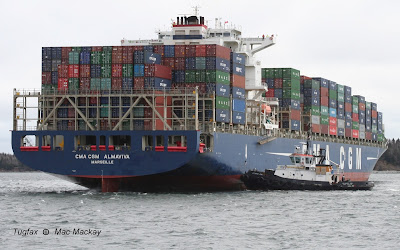 High above the action, the harbour pilot on the bridge wing directs the tugs by VHF radio. 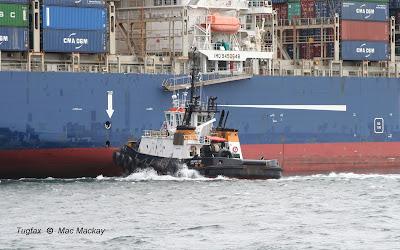 Atlantic Oak is not made fast, so when the ship has turned sufficiently and begins to make sternway, it can back off quickly. 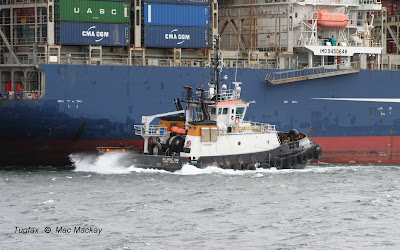 Moving rapidly in reverse, the tug begins its move to the ship's port side. 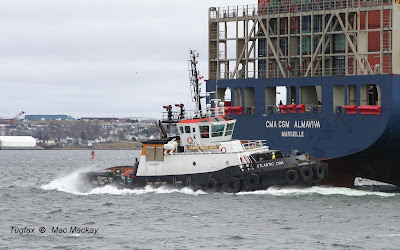 Staying clear of the backing ship, Atlantic Oak makes a tight arc around its stern. 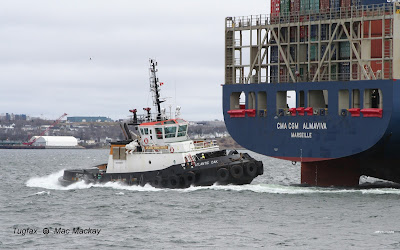 It takes skill and nerve to swing steadily around the moving ship to take up the new position. The deck hand is already forward to make the line fast when the time comes. It would be cold and wet work today. 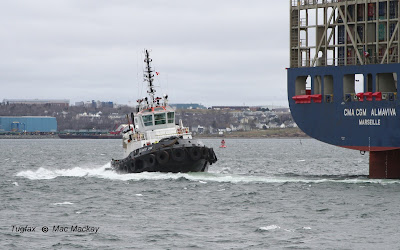 Once clear, the tug straightens out to move alongside and push the ship into its berth.

The pilots and tugs make this similar manoeuver several times a week, but every time the wind and weather conditions are different. Even so they make it look easy.

The small tug Océan Uannaq sank April 1 while working on the Champlain bridge project in Montreal. The multi-year, multi-million dollar project to replace the span across the St.Lawrence River is using a number of tugs and barges to excavate for and build new foundations. The fast flowing river, particularly in the spring, can be a dangerous place to work. 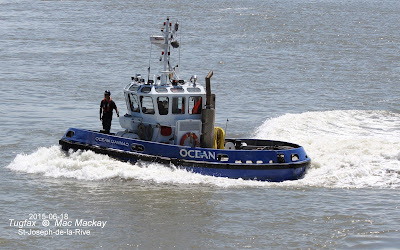 Océan Uannaq at hull speed during a break from dredging operations.

The Transportation Safety Board is investigating the accident which was not publicized initially.  The tug is resting on the bottom, and so far has not spilled any of its fuel or oil. Once the investigation is complete, the tug will be raised. The two crew members scrambled to safety aboard another tug.


Ocean Uannaq and sister tug Ocean Nigiq were built in 2008 by Groupe Océan to work at the Baffinland Iron port project in Milne Inlet (their names are Inuk for northwest wind and southwest wind). They were transported to Baffin Island in the barges Mary River and  Milne Inlet and worked on construction of the port. The twin screw tugs develop 770 bhp. 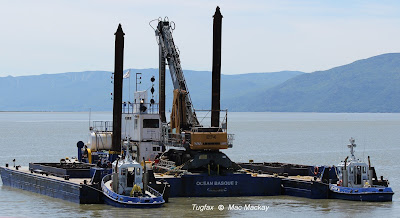 
On completion of that part of the project Groupe Océan brought the tugs back to Quebec and assigned them to their dredging fleet to handle spoil barges. They have worked up and down the St.Lawrence in recent years, with the dredge Océan Basque 2 and the scows Maxim D and Dominic TD. The scows have stern notches and connect to the tugs with a combination of face wires and bow tethers.

Océan Uannaq transferred to the Champlain project last year and has been working there all winter. Groupe Océan has a large fleet of small tugs,workboats  and barges that they rent out bareboat to construciotn companies, and it seems that the tug was working for a contractor at the time of the sinking.

Victorious - First From the Lakes

The articulated tug / barge Victorious / John J. Carrick arrived this morning in blustery conditions straight from the Great Lakes. They passed down through the St.Lawrence Seaway March 24-25, the opening day of the waterway following the winter shut down.

McAsphalt Industries, owners of the pair have a terminal in Eastern Passage at the former Dook's Dock with storage tanks for asphalt, bunker C and heavy fuel. McAsphalt is part of the Miller Group, which also owns Sterling Fuels, the provider of marine fuels to ships in Halifax.

The tug Victorious, 1299 grt, 5300 bhp, was built by Penglai Bohai shipyard in Shandong, China, which also built the 6916 grt barge John J.Carrick in 2008. The pair are connected by means of the Articouple connection system which allows the tug to adjust its position within the barge notch depending on the barge's draft. The tug is also free to pitch independently but does not roll. Although fitted with towing gear, the tug remains tethered in the barge notch in virtually any conditions.

The tug/barge spend most of their time shuttling up and down through the Seaway but also make extended trips to Saint John, NB and Newfoundland depending on demand.