The substitute tug Spitfire III (see previous post) has been getting its share of escort duties. As the most powerful tug in Halifax, it is the usual choice when two tugs are required to escort a ship to Fairview Cove.

Today it got a good workout with the 8-,274 dwt ship Mary as it transited the Narrows. Fleet mate Atlantic Oak was the second tug, and it took up position on the port bow, and does not appear in the photos. 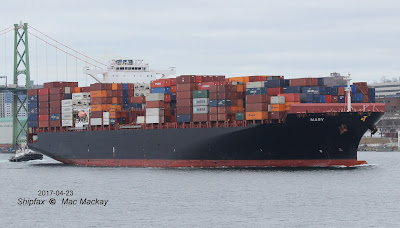 Tucked in astern of the Mary, Spitfire III is ready to work. 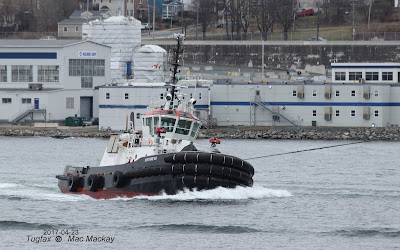 Leaning into the line, the tug lists to the point of getting its deck wet. 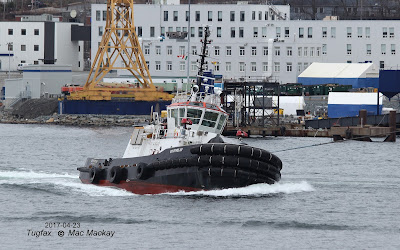 The tug can exert 100 tonnes or so of braking and turning force to swing the ship's stern. 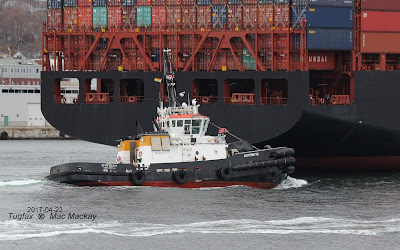 After straightening up a bit, the tug once more leans into the line as it rounds the pier 9 knuckle. 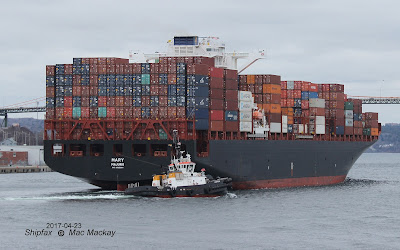 Spitfire III is lining up the ship to pass under the MacKay bridge.

With the tug Atlantic Fir off to Minas Basin to assist with the tidal turbine project, ATL brought in one of its big terminal tugs to fill in. Spitfire III is one of three 5,432 bhp, 70 tonne BP tugs built to service the LNG terminal near Saint John, NB. With little work at the terminal these  days, the tug is freed up for harbour duties. 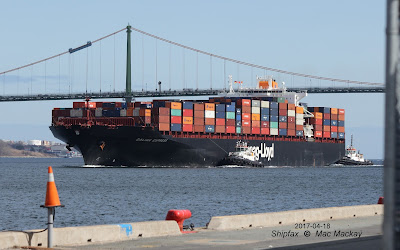 Atlantic Willow has its line up near the bow, and Spitfire III is tucked in astern for tethered escort as Dalian Express transits the Narrows. The tug is about to go into a hard move to the ships starboard side and exert about 90 tonnes of pull to swing the stern.


The Cape Sharp Tidal Power project, developed jointly by Open Hydro Ltd and Emera Inc was positioned in the Minas Basin last year, but now needs adjustment and is to be raised off the seabed and barged to Saint John on its own specially built Scotia Barge assisted by the tugs Atlantic Hemlock, Atlantic Bear and  Atlantic Fir. There is about a one week window of favourable tides to do the work, so Atlantic Fir may be away from Halifax for some time. 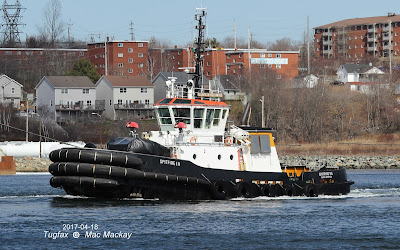 Pull completed, the tug swings back in line with the ship. Note the escort winch is covered to protect it from winter conditions.

In the meantime the more than capable Spitfire III will perform ship docking and escort services in Halifax. Today it assisted the 1000,006 dwt tonne Dalian Express transit the Narrows in a stiff breeze, then turn the ship when it reached Bedford Basin. 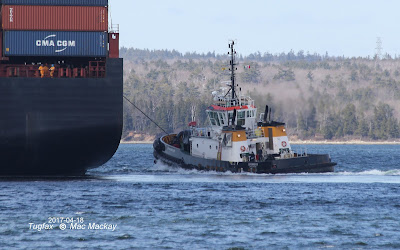 Spitfire III leans into the line as it assists in turning the ship in Bedford Basin.

Unique among Atlantic Towing tugs, Spitfire III and its sisters (Atlantic Bear and Atlantic Beaver) are not named for trees. However it is indirectly. During World War II, one of the J.D.Irving businesses made specialty aircraft plywood, used to build Mosquito and Spitfire aircraft among others. K.C.Irving, himself was a World War I member of the Royal Flying Corps and was a keen pilot in peacetime, once landing his own float plane on Halifax harbour.

Making its way from the Great Lakes to Halifax for the first time this year, an articulated tug/barge arrived at the McAsphalt jetty in Eastern Passage this afternoon. As of January this year the tug is now named Leo A McArthur in honour of one of the McAsphalt founders. It is paired with the barge John J Carrick, named for the McAsphalt co-founder. 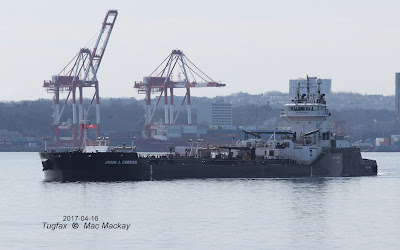 Leo A McArthur has rounded Ives Knoll and is passing Indian Point on its way up Eastern Passage.

The pair were built by Penglai Bohai Shipyard Co Ltd in Shandong, China in 2007 and are connected by the Articouple system that allows the tug to pitch independently, but remains connected except in the most extreme weather conditions. It is equipped to tow the barge if necessary. 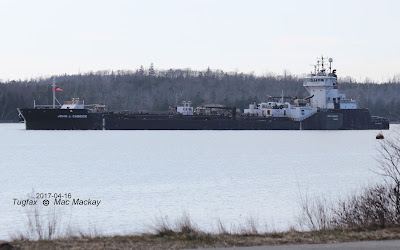 Taking the way off, the combo begins to turn in the small basin off the McAsphalt dock.

As built, the 5,000 bhp tug was named Victorious, after a famous Great Lakes bulker, once operated by the Upper Lakes Shipping Co Ltd. Upper Lakes managed the McAsphalt fleet, until 2011 when the company sold its ships and was wound up. McAsphalt Marine Transportation Ltd now manages the McAsphalt fleet which also includes the articulated tug/barge combo Everlast / Norman McLeod.
Both units normally operate on the Great Lakes and St.Lawrence River, but the McArthur / Carrick combo usually makes a few coastal trips each year. 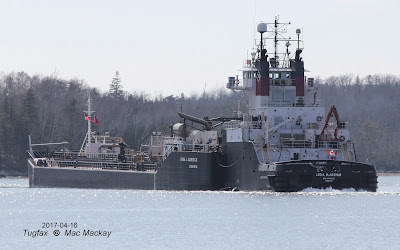 Using a bow thruster on the barge and its own twin screws, the Leo A McArthur powers a turn to allow it to back into the dock. 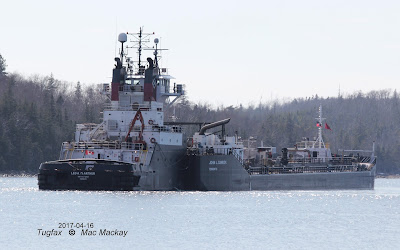 The tug's stern is heavily fendered and there is a large strong back on the fan tail for towing. The wheelhouse also has excellent visibility aft.

US tugs (yes plural) on the move

What was expected to be a short stay in Halifax for the tug Genesis Victory (see previous post) turned into a bit of a marathon as weather systems kept wandering through the region making conditions unfavourable, particularly in the Cabot Strait and eastern Gulf of St.Lawrence.
There was also ice in the Sydney Bight (enough to trap the big Marine Atlantic ferry Highlanders for a time) but the northern side of the Strait was blown quite clear.
It was not until Sunday April 9 that calm conditions prevailed and Genesis Victory ex Huron Service got under way for sea, towing its barge GM6506 directly from the Bedford Basin anchorage. 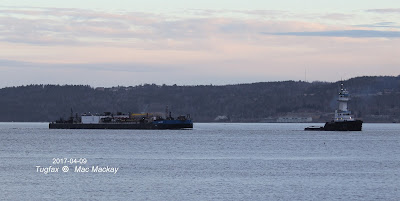 Genesis Victory underway in the Basin early Sunday morning heading for sea. It was very calm, and the barge tracks well, so it was not necessary to push it from the notch while leaving harbour.

The tug and barge remained at anchor from March 26 until April 1 when they went in to pier 9c for the day - likely for supplies, such as water. It went back to anchor that evening then put in a pilot order for Saturday April 8, but that was cancelled after the pilot was aboard due to late received weather forecast with high winds over night. By Sunday however it was good to go and they headed for the Great Lakes - finally. 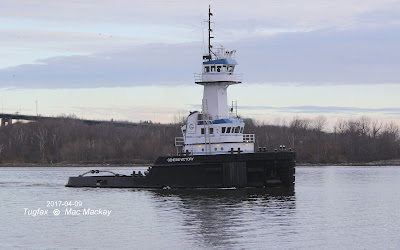 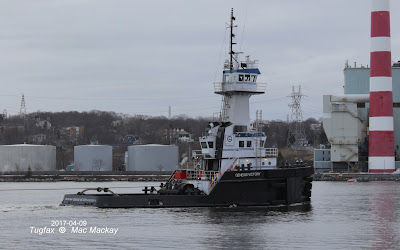 Tow line bar taught, the tug glides through the Narrows in near dead calm conditions. Her twin EMDs were purring nicely as she made the bend at Tuft's Cove.

It was a much briefer stay for the  traditional US style tug Thomas. It arrived this morning with the barge J.G.Burke and was underway again this evening back to New York. 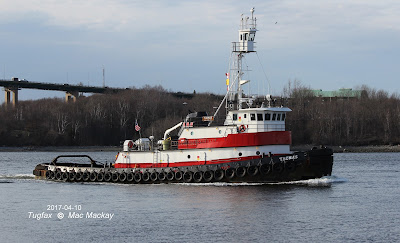 Built in 1976 as Ocean Voyager by McDermott Shipyards Inc in New Iberia, LA the tug was acquired by Weeks Marine Inc in 1986 and renamed. Powered by a pair of GM EMDs totaling 4,000 bhp it has a tiny bird's nest type conning post atop a spindly mast. it is also fitted with a substantial towing winch and is obviously used for barge work with (count 'em) 27 aircraft type tire fenders, and big bow and stern fenders.  On its last visit to Halifax in October 2008, it had the barge Weeks 246 in tow, and loaded steel bridge fabrications at the Cherubini Metal Works pier in Eisner's Cove. 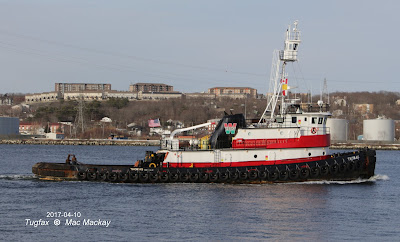 There will be more on its tow, the barge J.G.Burke in future posts. The barge was built specifically as a building platform for concrete pier cribs. The cribs will be slipformed in place on the barge, which will then submerge to float them off. Weeks is the parent company of McNally, who will build the six 45m x 20m cribs for the new navy jetty for Arctic Offshore Patrol ships (AOPS). Work on the jetty began last year, but shut down from January until the last week of March.
As a US flag vessel, the Burke has been granted a coasting license, good from March 1 to August 31 of this year to build the cribs (also known as caissons).