A former Canadian anchor handling tug supplier is making a return to Canadian waters, but this time as a towing vessel.

Thor I arrived in Montreal October 11 and prepared to take the retired bulker Salarium to Turkey for scrap. They expected to depart Montreal October 15. However Ship Safety inspectors denied permission to sail until certain repairs were made to the ship (renamed Sal for the tow).

Built in 1986 by Orskovs Christensens, Frderikshaven, Denmark, the 2886 gt vessel was originally named Challenger III for a short time before becoming OIL Challenger . In 1991 it was renamed Maersk Challenger and operated under Canadian flag out St.John's, NL from 2002. 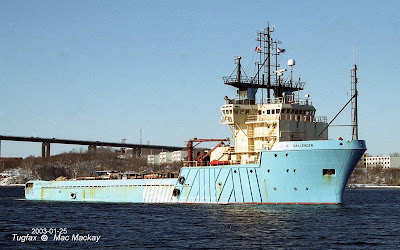 However it was in and out of Halifax from time to time.

In 2014 it was sold and Tugfax among others, thought it would be going to scrap. However that was not to be. New owners renamed the vessel Blue Aries, a name it carried until 2019. It was then renamed Thor I.

Finally clearance was received to sail from Montreal, and the tow got underway October 27, with the Trois-Rivieres-based tug Ocean Charlie as tethered stern escort. Ocean Charlie will assist with keeping the tow in the channel until they reach the Escoumins pilot station. No ETA has been given for Aliaga, Turkey, but these tows usually take three weeks to a month depending on weather.

For more on the ship Sal ex Salarium see http://shipfax.blogspot.com/2020/10/salarium-to-scrappers.html