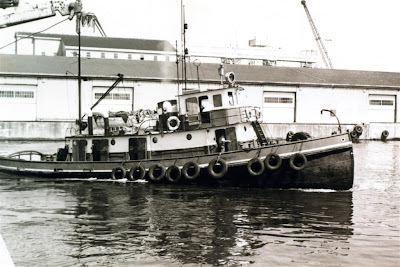 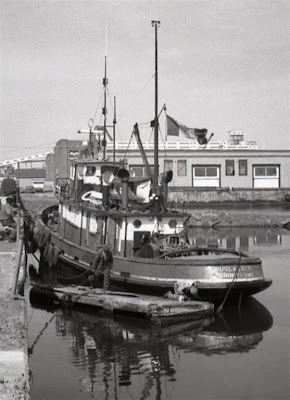 Forty years ago the Haterm container pier was under construciton in Halifax. McNamara Construction built the sea-wall and did dredging and filling. They used their classic tug Douglas Reid, built in 1914 in Cleveland, Ohio as Racine. It had long been converted to diesel, but still had classic hull lines.
Posted by Mac at 8:54 PM No comments: 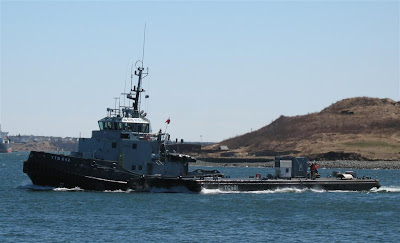 Svitzer Bedford at the ready.

Svitzer Bedford stands off the Svitzer pier awaiting the arrival of the container ship Atlantic Cartier early this morning. In the background Atlantic Oak returns to her pier on the Dartmouth side of the harbour after berthing OOCL Singapore. Both container ships tied up at the Fairview Cove container terminal. The OOCL ships require escort through the Narrows of the harbour and often use tow tugs. The ACL ships rarely use tugs, but this time Atlantic Cartier used 2 tugs- Svitzer Bedford and Point Chebucto.
Posted by Mac at 8:05 PM No comments:

Big Tug from the Shoebox 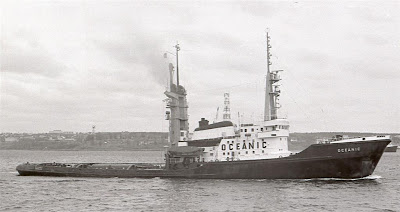 Halifax has seen many big tugs over the years, but as they age they are being removed from service and not replaced. With the recent loss of Waker to fire in the Netherlands and the scrapping of Wolraad Woltemade from South Africa, we can expect to see fewer and fewer of these big tugs.
There are several reasons. First is the presence of powerful offshore support vessels. These multi-function boats can perform towing and salvage services and there are usually vessels positioned near to incidents. As a result salvage and towing companies do not need to rely on their own vessels, when there are others for hire.
There is still a need for long distance towing and for salvage vessels, but it is no longer possible for most traditional salvage companies to keep vessels on station without work, in case of need. Some governments, notably the UK, France, the Netherlands and Germany do have big boats on government charter to respond to emergencies in their home waters, but even South Africa is down to one tug for this purpose, and it may soon be withdrawn. if the contract is not renewed.
Many long distance tows have been replaced by submersible ships. We have seen several of these in Halifax in the past two years- all doing work that was formerly done by tugs. The safety record and speed of submersibles means that they will be used more and more in lieu of tugs.
Big dedicated tugs are expensive to operate and maintain. They are being replaced by powerful smaller and more efficient vessels that can carry out most towing requirements, and be kept busy all the time.
So the days of the big traditional ocean tugs may be numbered.
The German tug Oceanic, owned by Bugsier of Hamburg is seen leaving Halifax on December 18, 1982 after towing in the oil rig John Shaw. (Its derrick is visible in the background between the tug's two masts.)
When built in 1969, she and sister Arctic were the most powerful tugs in the world, at 13,000 bhp. Remarkably Oceanic is still in service. She was re-engined in 1985, and after a period of layup from 1987 -1996, has been on contract to the German government, as an emergency towing vessel (ETV.) She is beautifully maintained, but does not get a lot of work. We are unlikely to see her or her kind in Halifax ever again.
Posted by Mac at 1:02 PM No comments: 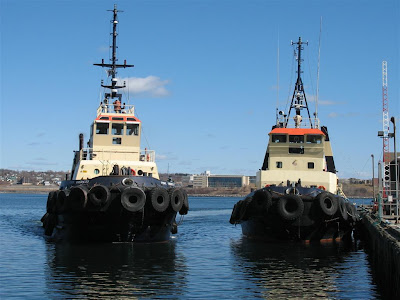 Point Chebucto returns to the dock at 12:15 after sailing the autocarrier Triton Highway. The ship arrived at the Autoport earlier this morning and required two tugs for docking (Point Chebucto and Svitzer Bedford).
Point Chebucto was built in 1992 by Halifax Shipyard and is a 4000 bhp azimuthing stern drive tug. She was designed with all accommodation above the main deck and has an extra high bow for berthing high sided ships. As a result she is sometimes too high for some of the ships that arrive in Halifax. However she is an excellent seakeeping vessel, and has made numerous short trips to Sheet Harbour and Lunenburg. I don't believe she has been farther afield than that.
She is shown here passing fleet mate Point Halifax, built in 1986 and with 4200 bhp. Point Halifax is still not in regular service, as repairs are ongoing after last August's incident in the Strait of Belle Isle when she damaged one of her stern drives. Point Halifax was built by McTay Marine in Bromborough, England, and crossed the Atlantic on her delivery trip. She has also made long distance trips to the Bahamas, Hudson Bay and the St.Lawrence River, but is not as sea friendly, and is a notable "roller" according to her crews.
Posted by Mac at 12:40 PM No comments: 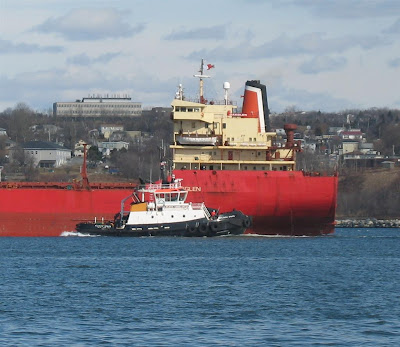 Atlantic Spruce is shown at work coming alongside the bulk carrier Oakglen. Atlantic Spruce is steaming stern-first to come alongside the ship. The pilot wanted the tug power near the stern of the ship to assist in turning it, but the ship's stern is cut in, and the tug's bow would be wedged under the stern if she had approached bow forward.
The advantage of the ASD type tug is evident here. She can steam at almost full power in the astern configuration and connect up with her wire as close to the stern as needed.
Posted by Mac at 1:56 PM No comments: 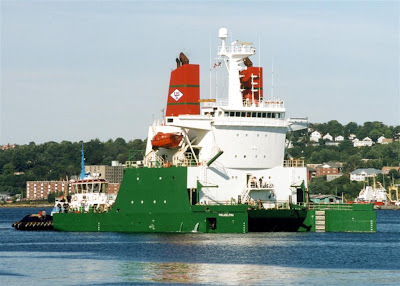 US Shipping Partners, a troubled US operator of tanker barges, is sending some of its older Integrated Tug Barges to the scrappers. Built in the early 1980s, these odd ships consisted of a tanker barge (built at Bethlehem Steel), coupled with a catamaran vessel (built by Halter), that locked into the stern of the barge over a protruding tongue.
Called tugs, the catamarans were really helpless vessels on their own. They could not tow, nor did they sail happily on their own. They were really "rule breakers" which allowed the owners to class their vessel as a tug/barge, when in reality it was a tanker with a detachable stern. In fact each barge and catamaran unit had the same name!
US rules eventually changed to ensure that the tugs were really tugs, and so new Integrated Tug Barges (ITB) were outlawed and the Articulated Tug Barge (ATB) is the now the norm.
Several of these ITB rigs had refits in Halifax when the Canadian dollar was very low compared to the US, and when the sterns were detached, they required tug assistance to navigate and lock with the cargo section!
The photo shows Philadelphia with Point Valiant pushing from the stern in 2002.
Sister ITB Mobile, which also had a refit in Halifax is still in service under US flag, and Jacksonville and Groton have gone to Nigerian owners. Baltimore and New York have been sent to scrap when buyers could not be found.
Posted by Mac at 10:17 PM No comments: