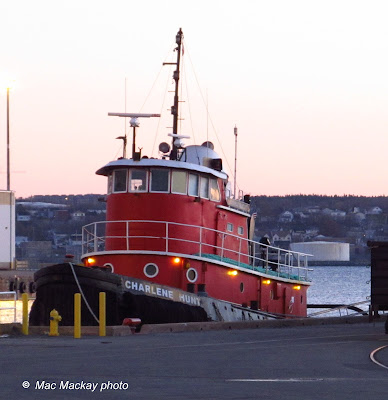 The venerable US flag tug Charlene Hunt arrived in Halifax yesterday for an unexpected visit. On its way to St.John's, NL, the tug put in to Halifax, probably to escape fierce winds and high seas, and maybe to seek a calm spot to effect some repairs.
There was no sign of life aboard at sunrise this morning, but I will keep an eye open today.
Built way back in 1962 by Equitable Equipment in Madisonville, LA, the tug has the traditional US "boot heel" design of pilothouse/captain's cabin. A single screw tug of 2200 bhp it was orgionally powered by an Alco main engine-and may still be -( Lloyd's Register isn't sure.)
It has had numerous names and owners over the years. It started life as Colonial later becoming HR 1.  It then did a stint as Morania No.24 for the well known New York tank barge operators (now named Penn Maritime), moving on to the Staten Island operator Turecamo Bros as Betty Jean Turecamo. (Turecamo has since merged into Moran).  In 1993 it became Anna V. McKay and in 1996 it became Bay State Towing's Molly.
When the Boston area Bay State morphed into Constellation Maritime in 2005 it was renamed Orion.
In 2006 it moved on to its present owners, Hunt Marine I LLC of Narragansett, RI and became Charlene Hunt.
It is wonderful to see these wonderfully maintained older tugs still operating. In case I can't supplement this posting with more photos, look for Jack Cliford's excellent photos on AIS at: http://www.marinetraffic.com/ais/shipdetails.aspx?mmsi=367025770&header=true
Posted by Mac at 8:10 AM No comments: 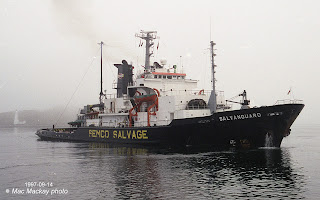 As posted last year, http://tugfaxblogspotcom.blogspot.ca/2011/07/salvanguard-iii-new-generation.html, Semco Salvage and Marine of Singapore has had three Salvanguard's in its fleet.
I have delved into the shoebox for more on Salvanguard (ii) built in 1978 for the Tokyo Salvage Company. Semco acquired it in 1987 and ran it until 1998 as a salvage and towing tug.
Of 2,938 gross tons, it was fitted with two 6 cylinder MAN engines (built under license by Kawaski Heavy Industries) delivering 12,000 bhp through two controllable pitch props in nozzles. The tug was also fitted with two towing winches, a 5t bollard pull bowthruster, a 36 tonne deck crane and had 26 berths for ship's crew and salvors.
It was also fitted with fire fighting and salvage pumps and could deliver steam.
Its 1997 visit to Halifax was initially towing the oil rig Spirit of Columbus to Quebec City, stopping in Halifax so that the rig's thrusters could be removed, to reduce draft. The tow to Quebec City was marred somewhat by engine trouble on Salvanguard, meaning that the Quebec tugs had to do most of the towing work.
The tug returned to Halifax for engine work for ten days in September before heading to St.John's, NL.
Semco sold the tug soon after and it is now working as a North Sea research ship and named Geobay. It flies the Isle of Man flag, but is owned in Norway by DOF Subsea. 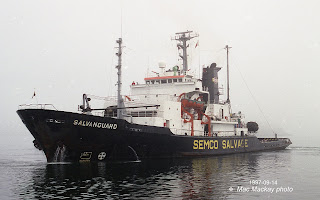 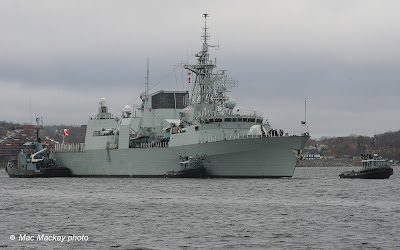 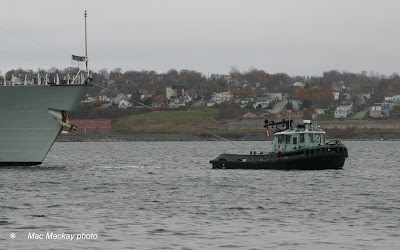 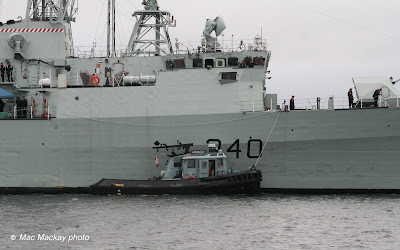 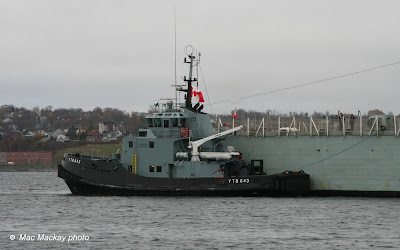 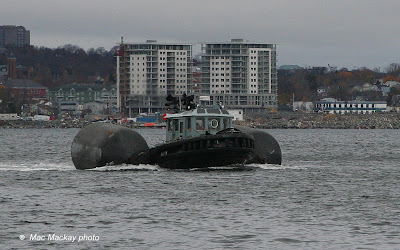 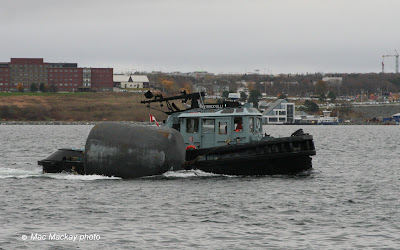 After many months of layup the tug William J. Moore and its barge McClearys Spirit arrived in Halifax this morning bound south.
Following up on the post of July 28: http://tugfaxblogspotcom.blogspot.ca/2012/07/william-j-moore-end-of-line.html the pair spent the rest of the summer idle in Montreal, Sorel and finally Trois-Rivières before sailing November 7. Still registered in Canada, to K-Sea Canada Corporation, they have been reassigned to work in Curaçao. While in Halifax they will likely be reflagged.
The double hull clean fuel barge and the tug are connected with a quick release Bludworth notch/pad system, which allows independent movement as an articulated tug/barge (ATB).
The reason for this move has received considerable comment on Boatnerd and Diesel Duck. I have no inside information, so will only repeat what has already been reported. The barge apparently did not pass its five year survey. The barge was working under charter to Ultramar, and that company preferred to find tankers on the sport market, even if it meant bringing in foreign flagged ships. It could do this because other Canadian flagged tankers were not available.
Both tug and barge have long histories, although they were extensively rebuilt in 2002. Perhaps their age had more to do with the situation than anything else.
K-Sea Canada is an offshoot of the US K-Sea Corp which was taken over by another large operator in 2001, Kirby Corp, and is now one of, if not the largest tug/barge operator in the US. 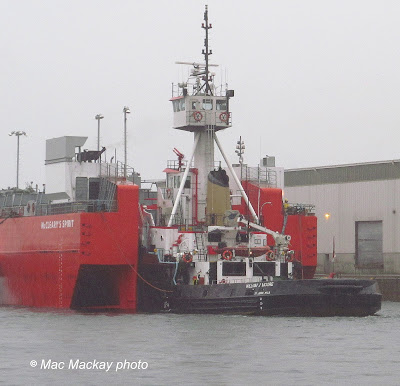 UPDATE:
On Friday November 16, the tug and barge sailed from Halifax, still flying the Canadian flag, and giving Freeport, Bahamas as its destination. Of note, V-Ships Canada appears to be managing the tug/barge. They also manage CSL ships among many others world-wide. 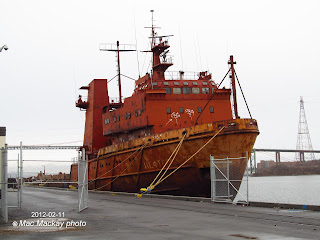 The supplier Intrepid Sea (ex Sable Sea-02, Neftegaz 29-98) left port under cover of darkness tonight in tow of Atlantic Elm.
The former Russian supplier had been idle in Halifax since arriving here in tow November 15, 2001. Various parts had been cannibalized to assist in the conversion and repair of former fleet mates in the Secunda fleet, and the ship had been moved around to various locations in the port. It had been laid up most recently at Pier 9A.
In May of this year its Canadian registry was closed and it has since been referred to as N-29. Whether it is registered at present it is hard to know since it flies no flag nor displays any port of registry.
Its history has been given here before, so will not be repeated, but it is apparent that with the recent buyout of McDermott Canada Ltd by local management, the ship had no future with Secunda.
The ship's destination was given as Boston, with an arrival date of November 13.  Once in Boston, it is my assumption that it will be handed over to a US tug for onward towage to its final destination for scrap, likely Brownsville, TX.
Departure from pier 9A was assisted by Atlantic Larch. As the ship was moving off the dock part of its port deck rail gave way and the bits the tug was using parted company with the ship, in the bight of the Larch's line. The bits later dropped into the water in the main channel.
Also the supplier had some old Rigid Hull Inflatable Boats (RHIBs) on deck and possibly some other scrap material.
Posted by Mac at 8:50 PM No comments: 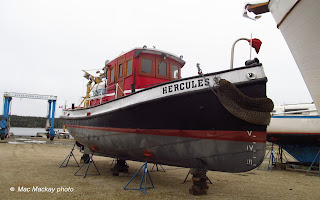 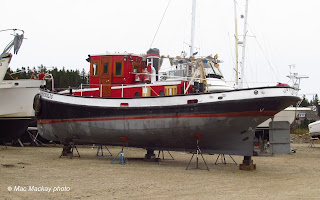 3. Listerville in naval service in the 1950s in Halifax harbour. The prominent smoke jack from the forecastle stove was a trademark of the pup tugs.
Posted by Mac at 10:15 PM No comments: 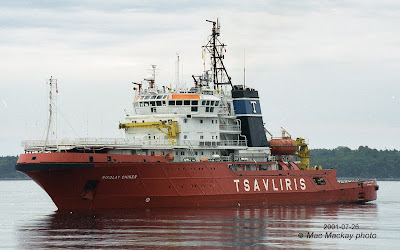 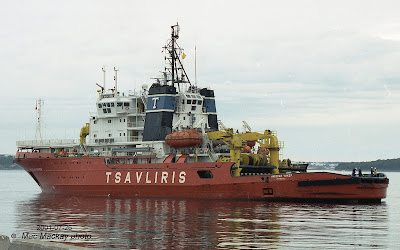 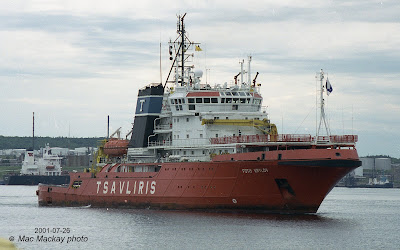 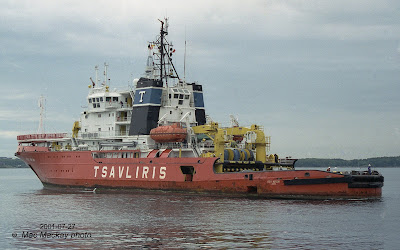 Absent from these tugs are the huge derricks that the previous large tugs carried. Powerful hydraulic knuckle boom cranes replaced the derricks.
The two tugs were in Halifax arrived in Halifax July 26, 2001 towing the drilling rig Eirik Raude from Pascagoula. Since that time the Nikolay Chiker has reverted to Russian naval control, and Fotiy Krylov is on charter to Tsavliris.
Posted by Mac at 9:25 AM No comments: