The sleepy port of Riverport, Nova Scota, at the mouth of the La Have River, and not far from Lunenburg, is one of the last places I would expect to find a tug (of any description). Once home to many fishing schooners and a bustling fish plant, it is now a much quieter place, with inshore lobster fishermen and a seasonal fish operation generating what little activity there is. 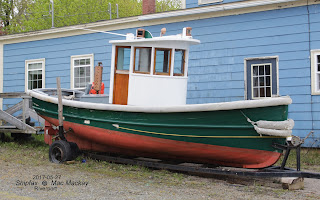 However the attractive wooden hulled Cowslip is parked on a trailer awaiting its next assignment. By the look of its neglected state that may be a while in coming.

I can provide no details except a suspicion that it may have been the tender for a marina or yacht club.

Cavendish Sea to the breakers

A tug with a short Canadian history has gone to the breakers in India, while still retaining its Canadian name.

Built as Ouro Preto in 1978 by Mitsui Engineering + Shipbuilding, Fujinagata Works, Osaka, Japan, it  was a small (40m x 13m) anchor handler of 877 grt, powered by a pair of 8 cylinder Pielsticks (built by IHI-Aioi) giving 8,000 bhp. At the time this was considered to be extremely powerful, particularly for its size. It had twin fixed pitch props and a bow thruster.
In 1981 it was transferred from its first owners Brasil Offshore to Petroleo Brasiliero (Petrobras)
and renamed Boreal.
The tug was one of a pair picked up by Secunda Marine Services in 1993 and renamed Cavendish Sea. Sister tug  Bonace ex Ouro Fino was acquired in the same deal and became Tignish Sea named for resort areas on Prince Edward Island.

This was the second pair of tugs acquired by Secunda in the 1990s in South America. (Ryan Leet and Magdalen Sea were the others.)

Tignish Sea towed Cavendish Sea into Halifax May 9, 1993 from Brazil. 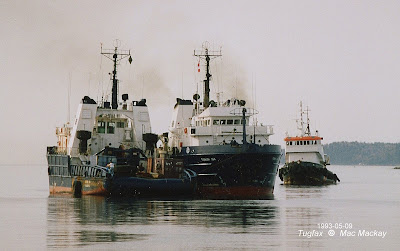 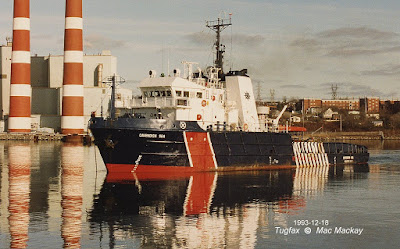 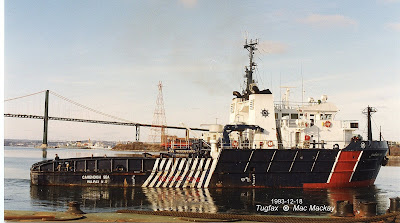 Unlike the pair of big tugs however, there was not a lot of work around for the small Cavendish Sea and in 1994 its Canadian registry was closed and it was sent abroad to work. I know it worked in the North Sea for a time, but I lost track of it after that.
The tug wound up back in South America registry flying Panamanian, Brazilian and Chilean flags until arriving at the breakers in Aliaga, Turkey, May 13, 2017.


End Note 1:
This not the only tug to be broken up recently - see these pages in the following days.

End Note 2
Sister tug Tignish Sea remains in Canadian registry and has had a very different history. Paired up with a self-unloading Great Lakes bulk carrier Sarah Spencer that had been converted to a barge, the tug was fitted with hydraulic ram couplers.  Renamed Jane Ann IV it sailed for a few years as an articulated tug/barge unit. However it has been laid up in various US ports for the past several years and is unlikely to sail again.