The latest Groupe Océan acquisition, Océan Cartier, remains in Quebec City undergoing maintenance. Since acquiring the tug from Svitzer Canada, when that company pulled out of Montreal, the tug has been to the Groupe Océan shipyard at Ile-aux-Coudres and has been repainted in GO colours.

The former Svitzer Cartier is a V-S tractor type tug, built in China in 2007 as Hai Gang 107. It was part of a group of tugs that Svitzer bought for use in Australia. However the tugs were rejected by crews due to suspected asbestos contamination. Svitzer then upgraded the tug for winter conditions, and working in ice, and brought it to Canada in early 2015 to work at Port-Cartier for ArcelorMittal. That assignment was short lived, and it was re-assigned to Montreal the same year.
Under Groupe Océan ownership it is rumoured to be headed to Hamilton, ON. 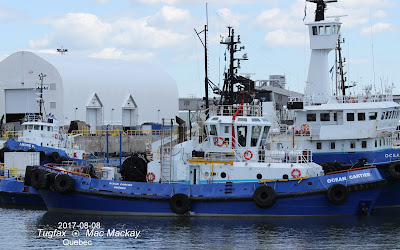 The tug is rated at 5400 bhp, 56 tonnes bollard pull and has firefighting capability.