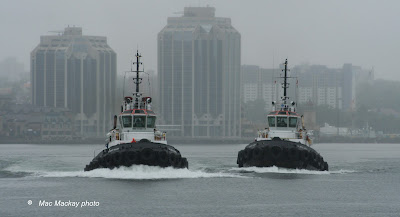 It was "Back to Base" for Atlantic Larch and Atlantic Willow following departure of the drydock on August 2. The two tugs assisted Atlantic Oak with moving the dock out into the stream, working it down the harbour and holding it in position while Eileen McAllister hooked up the tow line.
Now it is also "Back to Base" for me for the next few weeks, while I spend time on the shores of the St.Lawrence River.
I will be out of contact with computers, the internet and e-mail for the duration.
Posted by Mac at 7:59 PM No comments:

USNS Grapple returned to Halifax this morning after completing a successful recovery mission in Quebec. The mult-function salvage ship operated by the US Military Sealift Command (MSC) was sent to the Longue-Pointe-de-Mingan area of the Quebec lower north shore to recover the remains of five airmen lost in 1942 when their amphibious patrol aircraft, a PBY Catalina was lost on takeoff. As part of the US Prisoner of War / Missing in Action program it is the intention of authorities to recover as many of the missing as possible. In addition to remains, the ship recovered numerous artefacts tjnat had been preserved in the wreck due to cold waters with minimal light penetration.
The salvage ship Grapple was launched in 1984 and commissioned into the US Navy in 1986. In 2006 it was decommisioned and transferred to the MSC, where it now operates with a civilian crew. Its pennant number thus changed from ARS-53 to T-ARS-53. The ship can support salavage, towing and diving operations, and it fitted with a large suite of tools for those various jobs.
The ship also called in Halifax on July 6 on its way north. 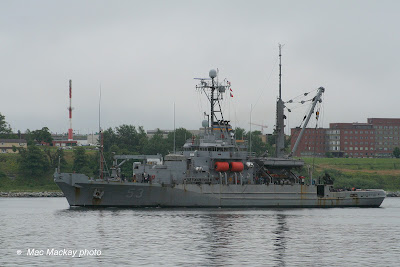 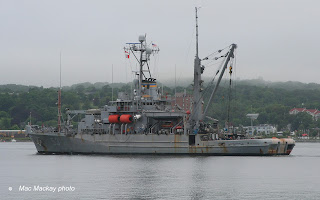 2. The ship is fitted for towing, salvage and recovery work. 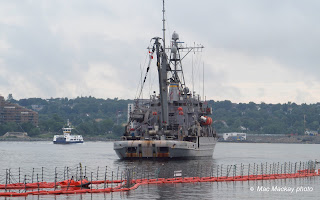 Eileen McAllister arrived this morning to prepare for a big tow. She will haul the retired floating drydock Scotia Dock II to ship breakers in Florida Texas.
Built in 1977 by Main Iron Works in Houma, LA, the tug is powered by two 16 cylinder GM EMDs giving 4300 bhp. It doesn't seem like a lot of power to tow the unwieldy drydock.
Further coverage of the drydock tow will be found on Shipfax. 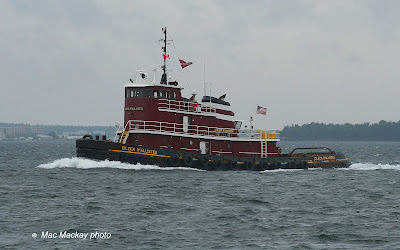 1. Classic lines of the traditional style US tug. 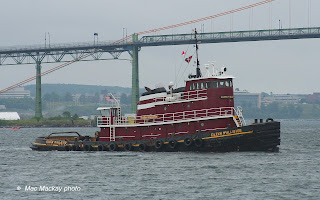 2. The winch operator's house has been added since I last saw this tug in 1997. 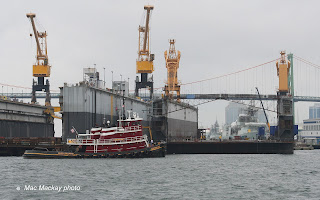 3. The tug crew gets its first look at the drydock they will be  towing. 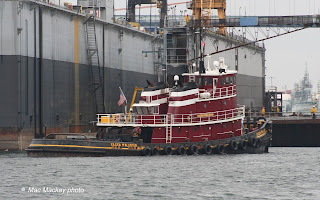 4. There is a massive double drum towing winch tucked into the deck house.
Posted by Mac at 11:20 AM No comments: