Summer has arrived (officially at least- someone should tell the weather man.)
As a result postings to this blog may be rare and intermittent for the next couple of months.
Posted by Mac at 8:01 PM No comments:

The Maltese flag tug Herakles sailed from Hull, England for Montreal on June 14. The tug is better known for its role as the British Maritime and Coast Guard Agency tug Anglian Prince. With British government budget cut backs, the tug was sold off and this is its first job under its new name. The tug is expected in Montreal June 23 to tow out the retired laker Algontario.
Built in Hong Kong in 1980 as Salvageman it worked for United Towing of Hull, but was laid up in 1990 when Howard Smith Group took over United Towing.
It was then sold to the Spanish company Boluda, and renamed Hispania.
In 1996 Klyne Tugs purchased the tug for charter to the Maritime and Coast Guard Agency for use as a rescue tug, and renamed it Anglian Prince. Klynne tugs is now part of the Knight Towing group.
The British government has decided not to subsidize Emergency Towing Vessels (ETVs) in a widely criticised decision earlier this year. The tugs, which are paid to stand by for emergencies in the English Channel and North Sea have figured in many dramatic rescues over the years. The German, Dutch and French governments continue to fund ETVs, but British waters will be left unprotected after September when the funding stops. The government will rely on "vessels of opportunity" (that is nearby commercial tugs) for ETV service, with costs to be paid for out of salvage claims.
In addition to its duties as an ETV it was also available for commercial hire. It was chartered by the Royal Navy to tow the Canadian submarine HMCS Chicoutimi back to Scotland after its disastrous fire in October 2008.
Anglian Prince was sold just last month to Greek owners and was quickly refitted and renamed before setting on on this trip.
Herakles is a 11,280 bhp tug, with a 160 tonne bollard pull, and is by far the most powerful tug to be hired to tow retired lakers to the scrap yards in Turkey.

Follow the tug's progress on AIDS and see photos at:

Atlantic Larch and Fir at work

1. OOCL Hong Kong with tugs coming to a stop. 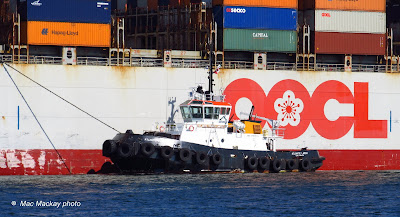 2. Atlantic Larch providing braking on the port side. 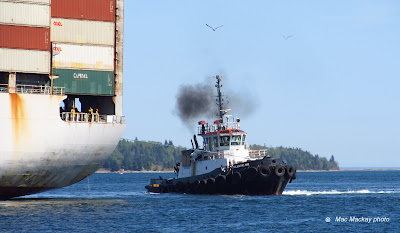 3. Atlantic Fir pours on the power to take the way off.


It's not all play for the tugs of Atlantic towing despite some PR work this week. Today the post-Panamax container ship OOCL Hong Kong had to be brought to a stop in the lower harbour.
Atlantic Larch put on the brakes from her position on the port side, and Atlantic Fir had to apply some power from her stern position. Her blue spectra line was bar taught as she she swung out to take the way off the ship.
The ship apparently did not have permission to pass under the harbour bridges. This could have been due to activity on the bridge, or the need to allow the tide to fall enough to give adequate clearance. These post-Panamax ships have substantial air draft, and they need special monitoring to ensure that the can pass the bridges safely.
The ship remained stationary in the lower harbour with tugs standing by for nearly an hour until it was given the "all clear" to proceed. This would indicate to me that it was not a tide related issue. 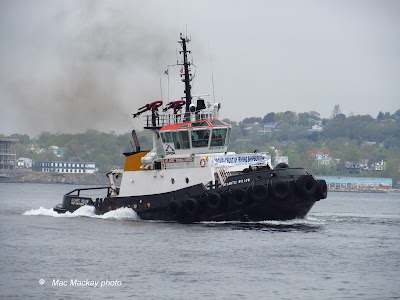 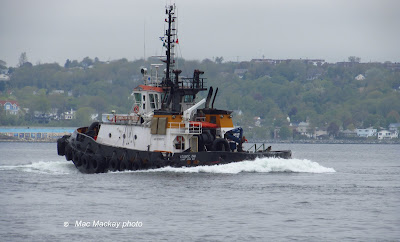 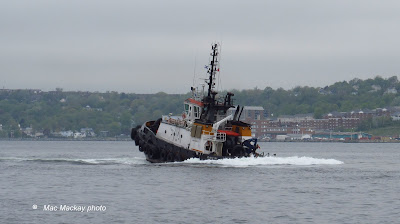 3. Then a crash stop in her own length. 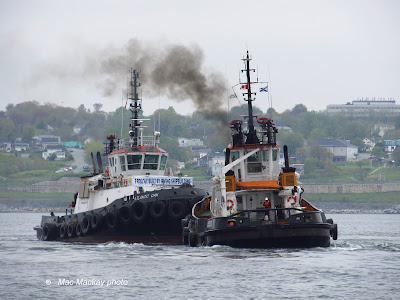 4. Oak and Willow meet for a push off. 1. Tow made up and heading out into a stiff head wind. 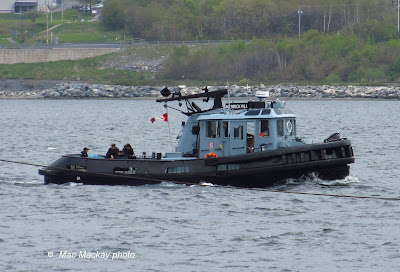 2. Merrickville standing by the tow, with the deck crew back on board. 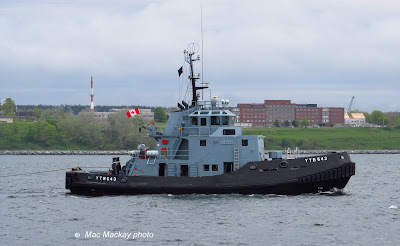 3. Glenbrook with the tow line.


As reported on Shipfax the CFAV Glenbrook towed the HMCS Kingston out of Halifax today. The pup tug Merrickville assisted in the tow, by taking the deck crew off and standing by until the tow was well underway.