As with companion blog Shipfax I like to send out older photos at Christmas time, along with best wishes for the holiday season.

My choice for this year is the tug Avantage when it was operating for the Quebec City based Groupe Océan. It is seen here while providing stern escort duties for the retired Great Lakes passenger ship Aquarama (renamed Marine Trader) in August 2007.

Lead tug for the trip to Aliaga, Turkey, was the Greek Aetos Z and the tow is off Quebec City on August 4, 2007. (Avantage accompanied the tow from Trois-Rivières as far as the Escoumins pilot station.) 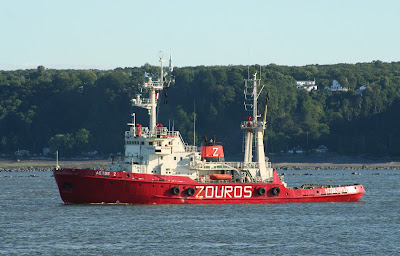 Not long after and a little farther down stream off Ile d'Orléans, it was possible to get some tighter photos. (Aetos Z was built in 1986 by Yaroslavl as the USSR tug, then 1997-2006 as the training ship Muzhestvennyy.) 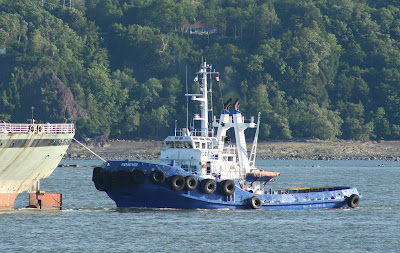 Laid up in Quebec City in 2018, it was "sold" earlier this year to Guyanese owners and renamed Kane G. Along with fleet mates Océan Echo II (renamed Brianna T) and the ATB Mega / Motti (tug renamed Mega II) all are now detained in Trois-Rivières, QC where they are likely to remain until next year - they are unlikely to depart in winter.

Built for work in the short steep seas of the English Channel it has a high bow and was probably a fine sea boat in its day. Its future is very much cloudy now.

In closing I wish to thank all Tugfax readers for their support during 2021 and wish you a very Merry Christmas and a Happy and Prosperous 2023.

The longevity of some tugs is hard to believe. Spending many years in fresh water may be an explanation in some cases, but for others it must be quality of construction and maintenance over the years. As of December 24, 2022 there are two tugs in Halifax, both over fifty years of age. 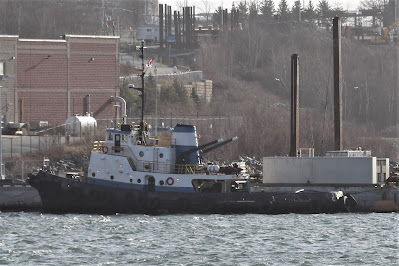 The older of the two, clocking in at a spry 60 years of age, is the W. N. Twolan, built in 1962 by George T. Davie + Sons Ltd in Lauzon, QC. A twin screw tug of 2038 bhp, built with Stork Werkspoor main engines, its initial service was in the Port of Churchill, MB on Hudson Bay. After several years there (with occasional refits and winters in Halifax) it was acquired by McKeil Marine and operated mostly on the Great Lakes. Later acquired by ABM Marine in Thunder Bay, ON, it was fitted with an elevated wheelhouse and ran exclusively on Lake Superior, pushing a barge carrying lumber. However it was laid up for several years.

The W. N. Twolan arrived in Halifax December 11 on its most recent trip, towing the barge NT 1802 from Matane, QC. It was reported that the barge will be loaded with a component for the McInnis Cement plant in Port Daniel, QC. No component seems gto hav e appeared yet, and it is getting to be very late in the season for towing in the Gulf of St.Lawrence. Recent bad weather has kept the tug in port.

The second elderly tug is the Atlantic Beech, a product of the Saint John Dry Dock + Shipbuilding Co Ltd in 1969. 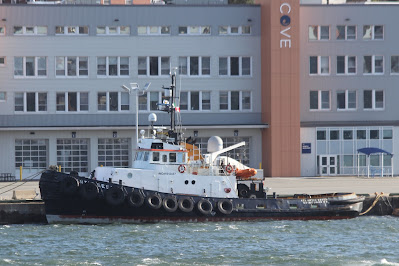 The 2250 bhp twin screw tug was initially named Irving Beech but was renamed in 1991 when the entire Atlantic Towing Ltd fleet was renamed as part of a corporate restructuring. The tug was one of the first Canadian tugs built when new rules required all accommodation to be above the water line. For many years the tug operated in barge work for Irving Oil, usually with the barge Irving Seal. They ranged over most of Atlantic Canada and into the St.Lawrence River. After the corporate restructuring it also did harbour work in Saint John and even in Halifax for a time.

For the last several years the Atlantic Beech has worked in the Hudson Bay in the summers (with fleet mate Atlantic Elm) handling lighterage barges as part of the Nunavut Sealift. The barges ferry cargo from ships in Chesterfield Inlet to Baker Lake, 320 km inland from Hudson Bay, and Rankin Inlet.

On December 22 the Atlantic Beech completed the tow of the fire-damaged ferry Holiday Island from Wood Islands, PE to Sheet Harbour, NS for scrapping. It is now en route back to winter layup in Saint John, NB, but has put in to Halifax during the current spell of severe weather. The crew may have returned home overland!

Thanks to readers for more information on the big German tugs:[see also previous post] 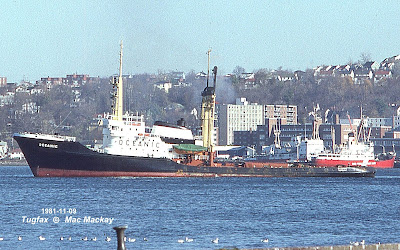 As per the December 7 post, the Oceanic sailed from Halifax December 18, 1983. After re-engining in 1985 both Oceanic and Arctic had increased bollard pull from 150 to 189 tonnes, but this did not really improve their viability. In 1996 Oceanic was deployed as an Emergency Towing Vessel (ETV), but its 9 meter draft was too great for coastal work and it was not a success. It was sold to Turkey as mentioned, and then in 2016 it was towed to Malta for conversion to a yacht. However work has stalled and it seems unlikely that it will see service again.

Among the other big Bugsier tugs Simson is reported to be in Romania as the Sea Ranger. 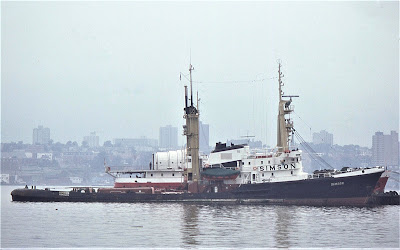 Most of the other Bugsier ocean going tugs called in Halifax at one time or another: 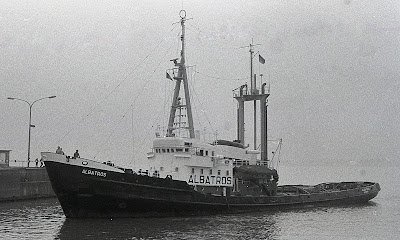 Much smaller than the other Bugsier tugs, the Albatros had a similar appearance.[contributed] 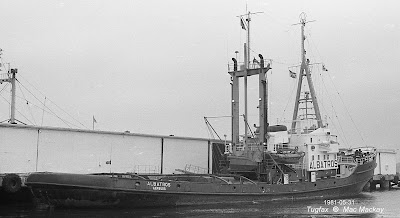 And here is one farewell photo of the Oceanic taken forty years ago today when it sailed from Halifax.

In looking back through my files I note a significant tug arrival in Halifax on December 7, 1982. It was a different scene 40 years ago - large tugs were still used to tow ships and oil rigs, and the arrival of the German tug Oceanic towing the semi-submersible ODR John Shaw was not particulary unsual.

(n.b. the date on the above photo is incorrect, it should read 1982-12-07)
Assisted by harbour tugs Point Vigour (c), Point Vibert (r) and supplier Seaforth Highlander and Seaforth Jarl (one of which - far right) the oil rig would be secured at Woodside.

When built in 1969 the Oceanic and its sister tug the Arctic were rated at 14,640 ihp (12,800 bhp) and were the most powerful tugs in the world. They were certainly among the most impressive, as everything sbout them spoke of power and sea-keeping ability. They were built for double duty as salvage tugs and as long distance ocean towing tugs. Their great power could also propel them at 20 knots in order to rush to the scene of an emergency. 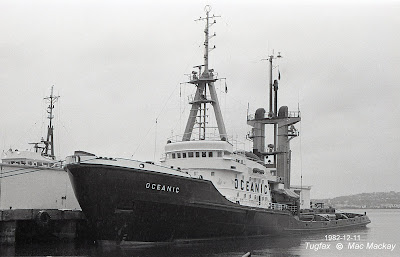 With the oil rig secured at Woodside, the tug remained in port until December 18, 1982.
This was not the tug's first call in Halifax. It was also in port in August 1969 when it was virtually brand new (it had been delivered in June), and had towed an oil rig from Europe to Sable Island. 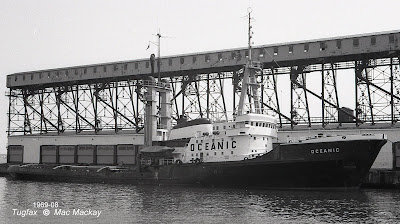 Owners Bugsier sold the tug to Turkish owners in 2013 and it was renamed Osman Khan and again in 2015 Orka Sultan. It returned to its original name Oceanic in 2016 and although spotted from time to time in the Mediterranean it was also reported in 2019 bound for Ghana. Its DNV classification was withdrawn in 2016 and surveys are long overdue.
Some of the above is a repeat of an October 26, 2012 Tugfax post: http://tugfaxblogspotcom.blogspot.com/2012/10/worlds-most-powerful-tug-for-time.html
.