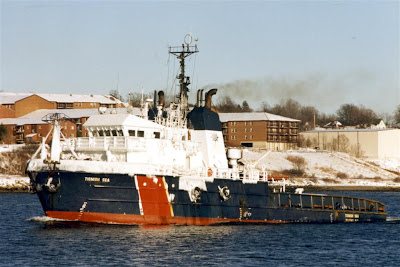 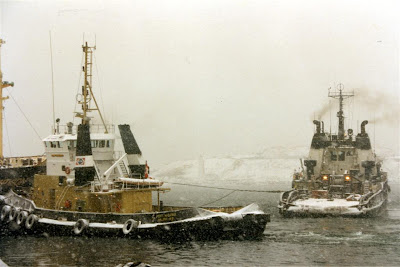 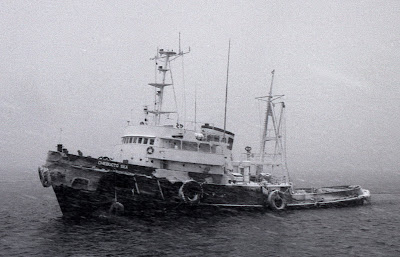 On January 10, 1986 the Greek bulker Amphion ex Frinton-93, Domina-86, 16565/77 en route Philadelphia to Europe with iron ore, began taking water 900 km east of Newfoundland. Despite horrific conditions CCGS Leonard J. Cowley managed to get to the scene and take off the crew of 34 by making multiple trips with her Zodiac.
Secunda Marine brought their tug Tignish Sea out of refit and steamed to the scene fitted with pumps and salvage gear. It was not until January 15 that they reached the ship. With their Lloyd's Open Form (No Cure No Pay) in hand they awaited the right time to board the ship and secure it for towing. That was a four day wait. The salvage crew started the generators and the pumps managed to stem the flow.
It took until February 3 to reach Halifax. Their arrival was greeted by a heavy snow fall and brisk winds. Their tug Chebucto Sea ex naval tug St.Charles went out to assist in steering the unwieldy Amphion into port where it was safely secured, with the assistance of Point Halifax and Point Chebucto.
The crew had abandoned ship fearing hull cracks. but once the ship was examined in Halifax, it was discovered that high seas had swept away some ventilators and only minor repairs were needed to get the ship back out to sea. She sailed February 23.
In 2000 Tignish Sea was rebuilt as an articulated tug for the barge Sarah Spencer and has worked on the Great Lakes ever since. Last year she was laid up most of the time however.
Chebucto Sea was sold last year to Newfoundland interests associated with Miller Shipping and has been renamed Matterhorn.
Conditions were less than ideal for photography on February 3.
The sunny photo of Tignish Sea was taken March 10 after a freezing spray trip to the Sable Island area.
Posted by Mac at 10:02 PM No comments:

Canadian Naval auxiliary tugs Glenevis (left) and Glenbrook (right) await the arrival of HMCS Charlottetown to berth at the naval Dockyard on a breezy February 11.
There are three Glen class tugs based in Halifax (Glenside is the third.)
These distinctive vessels were built in 1977-78, and have dual Voith-Schneider propulsion. Although only rated at 1750 bhp, they do not need more power since most warships are relatively light displacement (and thin skinned!)
Posted by Mac at 1:29 PM No comments: 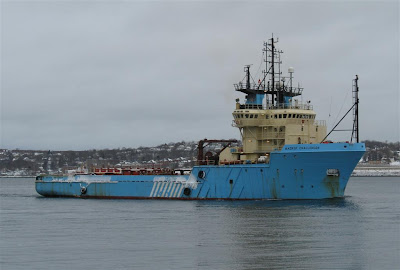 With the exponential increase in offshore oil and gas exploration and development in the past thirty years a whole new category of ships has developed. Generally called offshore support vessels, they are divided in many sub-categories.
Some are purely cargo vessels, aimed at getting supplies out to rigs at sea. Some are multi-purposes, able to do a variety of chores depending on the need.
One such is Maersk Challenger, built in 1986 and classed as an anchor handling tug supply vessel. Sort of a jack of all trades, its large deck area allows it to carry significant quantities of cargo in containers on deck. It is also fitted with tanks to carry fuel, potable water, drilling mud, cement and other bulk commodities needed for drilling and production.
However when the need is there it is a powerful towing vessel, rated at 160 to 173 tonnes bollard pull. This translates into about 14,000 horsepower which can be brought on line when needed. If the ship is performing less onerous duties it can operate without full propulsion.
Maersk is one of the largest offshore operators in the world, with more than 60 vessels. Its Canadian operation is a significant one with 10 ships and an 11th to be delivered this spring. It is therefore the largest Canadian operator of offshore support vessels. (Some would call them boats.)
And yes some are certainly tugs, but only on a part time basis. Maersk Challenger is seen leaving Halifax this morning with a deck cargo.
Posted by Mac at 10:59 AM No comments:

Oldie from the Shoe Box....Gulf Joan 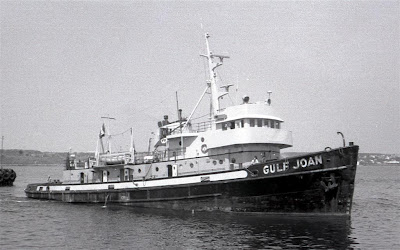 This great tug arrived in Halifax in the summer of 1971.
Built in 1945 by Marietta Manufacturing Co of Point Pleasant, Virginia (some say she was built by Tampa Marine) as LT-829 for the U.S.Army, she measured 150' LOA and was fitted with a 1200hp steam engine. She was built to go anywhere.
Gulf of Georgia Towing Co Ltd put her to work in 1966 as Gulf Joan after repowering her with four Caterpillar engines, totalling 3,060 bhp. This gave her a speed of 14 knots, free running, or 10 knots towing a barge of 6,000 tons.
On June 26, 1971 she left Esquimalt, BC towing the 500 ton crane barge William Denny for Morgan City (it became McDermott Barge No.18.) They arrived in Morgan City on July 31. It was then on to Halifax where they rendez-voused with the tug Salvage Monarch. It had brought the former Sorel ferry Napoleon L down the river. I did not record the date of the handover, but in a few days they were at sea again.
The tow arrived in Vancouver Sept 18, 1971 where the ferry was rebuilt as Howe Sound Queen.
Gulf Joan had been in eastern Canada previously, when she towed the barges GofG 270 (with the tug Gulf Diane aboard) and GofG 271 from Vancouver via San Diego to Halifax. She then spent the summer on charter to Fednav towing machinery to Resolute.
This was in the era when Gulf of Georgia and McAllister of Montreal had a common owner in Sogemines/ Genstar of Belgium.
When Gulf of Georgia became part of Seaspan (formed by Genstar) the tug was renamed Seaspan Commander. In 1990 they sold her off and she became Sea Commander for Sea-Link Service of Vancouver. They are still listed as her owners today. Last heard of, she was handling the barge Swiftsure Prince for them.
Posted by Mac at 9:03 PM 1 comment: