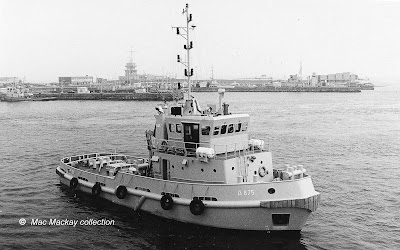 Although details are sketchy and accounts are conflicting (and some obviously wrong) two local tugs and the Canadian Coast Guard came to the assistance of a ship in trouble off Nova Scotia at the end of last week. The cargo ship Nordika Desgagnés had a steering problem while outbound from the Gulf of St.Lawrence east of Louisbourg. Reportedly bound for Sydney, Australia, the ship called in with its problem March 13. A storm was passing through the area at the time, and conditions must have been very poor with extreme high winds and seas.

CCGS Sir Wilfred Grenfell was first on the scene. Although based in  Newfoundland, it has been working out of Halifax this winter. 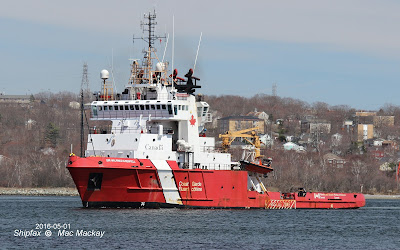 Built in 1985 in Marystown, NL, as an anchor handling / tug / supplier, on spec for the Newfoundland government, it was acquired by the Coast Guard and converted for Search and Rescue work. It was also upgraded to Ice Class I and fitted out for firefighting and equipped with survivor accommodation, including hospital.

Some reports indicate that the Grenfell took the Nordika in tow, but this seems unlikely. CCG ships are not normally equipped or mandated to tow vessels except in extreme circumstances. However under a new program recently announced, CCG ships are to be equipped with "towing kits" (whatever ever that may mean). Certainly a ship like Sir Wilfred Grenfell, with 12,860 bhp would be quite a capable towing vessel if it carried the right gear to tow.

Transport Desgagnés acquired Nordika Desgagnés a year ago, for use in northern supply work. Built in 2010 by Tianjin Xingang as  BBC Oder the 12,974 grt, 16,953 dwt ship is equipped with three 60 tonne cranes. As with many Desgagnés ships, it is chartered out bareboat for most of the year and brought back under Canadian flag from July to October during the northern re-supply season. A the time of this incident the ship is flying the Barbados flag, and is likely working for BBC Chartering.

Reports indicate that Sir Wilfred Grenfell handed off standby duties to the icebreaker CCGS Louis S. St-Laurent  which was off Sydney headed for the Magdalen Islands at the time.  How long it carried on these duties is not known to me. Sir Wilfred Grenfell stood by off Eddy Point at the entrance to the Strait of Canso to relieve the Louis at some point.

Desgagnés apparently put out the call for a tug, and Atlantic Larch, based in Halifax, was sent to the scene. The 4,00 bhp ASD tug is fitted out with a towing winch  in addition to the shiphandling winch forward, and is considered the "outside" tug in the Halifax fleet of Atlantic Towing Ltd. 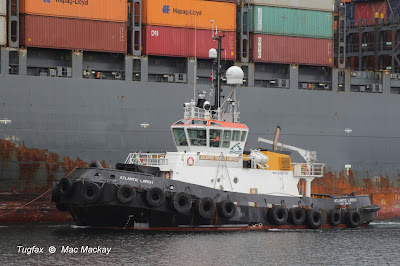 It is reported that the Atlantic Larch secured a tow line to the ship. It is not clear what happened then, but either the line parted or there was some other reason that caused Atlantic Larch to break off the tow and head for Port Hawksbury. (The original destination was given as Sydney, but that was upwind and likely to be more difficult).

It was then that the 7,000 bhp Atlantic Tern was called in from its standby duties off Sable Island, to take over the tow. This it apparently did and safely delivered the Nordika to the paper mill dock in Port Hawksbury early Saturday March 17. 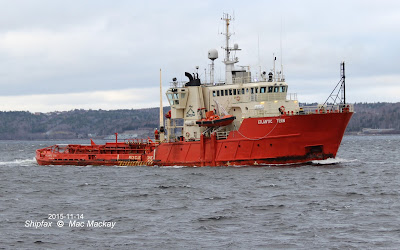 Atlantic Tern is much rebuilt from its original appearance as Canmar Supplier II when it was built in 1975 by Vito Steel Boat in Delta, BC. Fitted with two Nohab Polar engines driving CP props it was an ice class anchor handler with FiFi1 for use in the Beaufort Sea.  In 1998 it became Rem Supporter for the Norwegian company Remoy then in 2005 Thor Supplier for Faroese owners Thor P/F. In the meantime it had been rebuilt with a raised forepeak and its wheelhouse extended aft. Atlantic Towing acquired the boat in 2012 and initially renamed it Atlantic Birch II. However as it was attached to Atlantic's offshore support vessel fleet , they gave it a more appropriate bird name in 2013.

Ships working through ice frequently strain their steering gear or even jam their rudders while backing, especially with an inexperienced crew. That is one possibility of how the ship "lost" its steering. It could also be the strain of weather, or any one of a number of reasons. (The tanker Australian Spirit lost its rudder completely closer to Halifax in December 2014.)


However it has to be said that although there was a speedy Coast Guard response, there was not a large towing vessel available to assist. Fortunately for all involved the weather improved dramatically and a tug was found to assist, but it does not take much to imagine more severe conditions where even a 7,000 bhp supply tug would not have been adequate. Calls for an Emergency Towing Vessel program for the east coast have apparently fallen on deaf ears. Either that or British Columbia called louder - they are getting ETVs.

In a break from the usual job of shoving naval ships around, the Canadian Naval Auxiliary Vessel Glenside was tasked this week to return two large fenders from the Bedford Institute to HMC Dockyard. 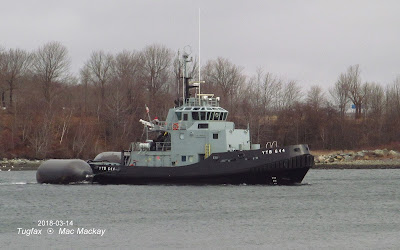 Glenside is one of three "Glen" class tugs based at HMC Dockyard in Halifax (there are two more at Esquimalt on the Pacific coast). Built in 1977-79 they are 1750 bhp (Ruston-Paxman) 19 tonne Bollard Pull Voith-Schneider tugs, and were quite revolutionary for their time. Despite their great agility and ability to move within the tight confines of HMC Dockyard, they are under-powered by today's standards and obviously are getting old and parts are hard to source.

Late last year the Department of Defense and the government procurement agency issued a Request for Information to "solicit feedback from industry" for replacement of these tugs. It was not a invitation for bids, since there is no funding in place yet, but more of a sounding out of those interested in building new tugs. I have detailed some of the particulars here before, but essentially the navy wants two new tugs in Halifax and two in Esquimalt, and they are to be more or less off-the- shelf commercial designs.

Canadian Navy tugs come under the direction of the Queen's Harbour Master (QHM) and and have civilian crews. The Master Attendant in the QHM is responsible for their daily operation.
When the current Glen tugs were planned, it was recognized by the QHM that work in HMC Dockyard had some unique characteristics due to the narrow cambers between the finger piers. The operators studied tugs in many other locations, including the Alcan tugs at Port Alfred, some of the earliest V-S tugs in Canada. Voith-Schneider tugs, with their ability to change thrust direction without having to re-orient hull direction, were ideal for the Dockyard work, but I believe it was a bit of hard sell to convince the top brass that the higher cost was justified. Perhaps that is why the horsepower is so low.

Things have changed since those days however, with  larger naval vessels in service and more to come. There are also many more options such as ROtor tugs (three thrusters), more sophisticated Azimuthing drives, including controllable pitch props, and more efficient V-S. It will be interesting to see what comes out of the RFI, which closed February 28.

The Warrior has landed

After a stormy day yesterday that prevented unloading, Dominion Warrior took to the water today from the heavy lift ship Stellaprima. 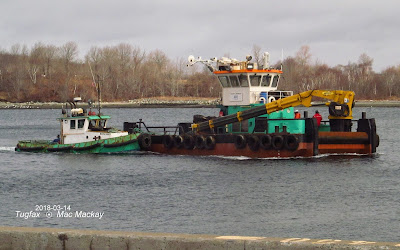 The new acquisition was shepherded by Dominion's Roseway to the Dartmouth Cove base, attended by Dominion Bearcat and Halmar. Both of these boats have been rebuilt by Dominion's own forces during their tenure with Dominion and it is likely that Dominion Warrior will receive similar treatment before it enters service. 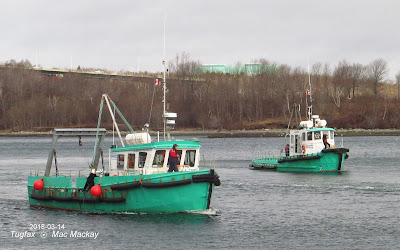 As per the previous post, Dominion Warrior ex Coastal Warrior will expand Dominion's capabilities to support its diving and marine service business by being a multi-tasking vessel with tug / cargo/ and other capabilities. 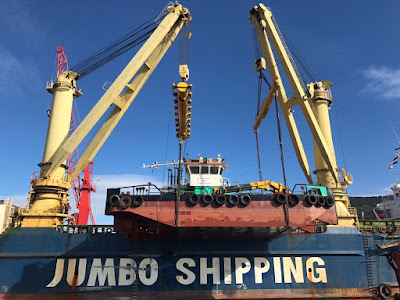 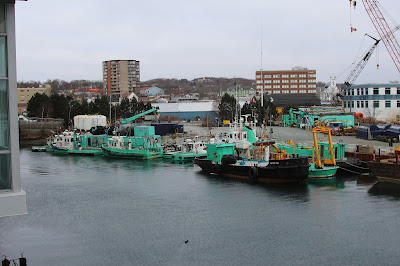 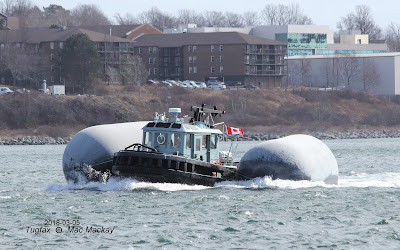 The Canadian Naval Auxiliary tug Listerville handled two large fenders today despite high cross winds in the Narrows. It moved the fenders from HMC Dockyard to the Bedford Institute. One was placed alongside CCGS Hudson and the other alongside the jetty. Very high water levels  - due to a stalled storm centre off Sable Island, and lunar high tides - may have made the fenders necessary to protect the ship from slamming against the pier.