The end has apparently come for the notable tug / supplier Venture Sea a former stalwart of Secunda Marine. Under the name Jarvis it was reported beached at Alang India on June 17, and scrapping began almost at once.

The Venture Sea dated from 1998 when it was built by Halter Marine of Pascagoula, MS at their Escatawpa shipyard. The story I have heard was that Secunda needed a high specification vessel in a hurry and Halter was the only yard that could deliver on a tight schedule. In fact the boat's upper superstructure was built separately and joined after the hull was floated downstream and cleared a low bridge on the Pascagoula River. (I believe it was the I-10 bridge with about a 40 foot clearance.) 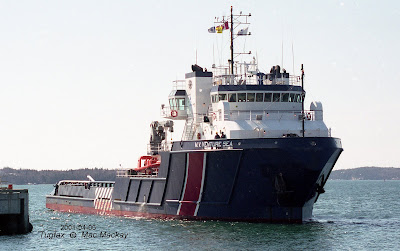 The 2235 gt vessel was rated at 12,292 hp from four GM EMD main engines and 132.5 tons bollard pull. I won't go into all the ins and outs of ownership as Secunda migrated to McDermott and back, and then to Siem, but during those years the vessel worked out of Halifax for at least some of the time.

Its last real assignment was an emergency tow for the bulk carrier Golden Opal with a cargo of iron ore from Baffinland Mine for Immingham. It experienced steering gear failure (perhaps due to ice damage) in the Davis Strait and Venture Sea was dispatched from Halifax September 27, 2020 to take the ship in tow for Nuuk, Greenland where it made repairs. 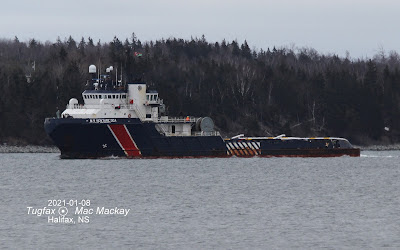 In late 2020 the ship was reported sold and renamed Jarvis under the Vanuatu flag. Its Canadian registration was closed December 22, 2020 but it arrived in Halifax January 8, 2021 from layup in Shelburne still carrying its original name. Curiously the ship always had the initials "M.V." before that name, even though that was not part of the official name. It is the only ship I know of that did this.

The new name was painted on in Halifax at Pier 27, shortly before sailing January 10, 2021. 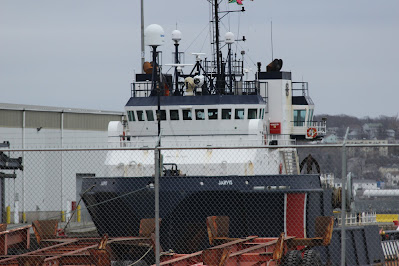 Since the sale to owners called Virgo Ships, the Jarvis * was reported in the Mediterranean, Western Europe, South Africa, South America (east coast), West Africa and South Asia. Other owners, such as Star Martrix of Hong Kong were later reported, but management remained with Hermes Marine Services of Mumbai. It is believed the Jarvis was towing ships and oil rigs to the scrap yards.

In April it was reported taking stores in Cape Town, departing for Alang. With a possible change of ownership in May, likely to Indian cash buyers, it arrived in Alang about the first of June. I would like to think that the breakers are among the few responsible ones in the area, but that seems unlikely. 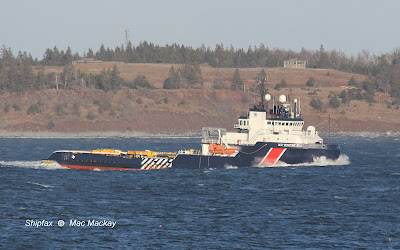 My favourite photo of the Venture Sea has it sailing from Halifax December 30, 2016 and dipping into a slight swell off Herring Cove - a taste of things to come in the life of an offshore tug/supplier.
* The Hermes Marine people tlike to name their ships after characters in Marvel Comics superheroes comic books. Jarvis is the name of the factotum in the family home of  Tony Stark, a.k.a. Ironman.