After many years of layup and on the sale broker's list, Atlantic Towing finally gave up on the Atlantic Maple this summer and scrapping began at the Indiantown tug base in Saint John, NB, and is largely completed by now.

In the 1960s Atlantic Towing Ltd ordered a pair of sea-going tugs from Saint John SB & DD.  First was Irving Maple and second was the larger Irving Birch. Irving Maple was delivered in 1966 and set to work towing oil barges for Irving Oil. Some very large barges, such as Irving Whale and  Irving Sealion were the usual consorts of this tug, which was also available for salvage and other towing work.

Her fine lines and high bow made her an excellent sea boat, and she proved herself many times over in bad weather and awkward tows.
In 1975 she towed the broken down Leslie from Newcastle NB to Philadelphia after a grounding.
Built for navigation in ice, Maple made several trips to northern waters, the most memorable was in 1980. She assisted Irving Birch in towing a mine plant barge from Trois-Rivières, QC to Little Cornwallis Island for Cominco’s zinc mine.


January weather in 1982 made for a difficult salvage job with Irving Birch when they were called upon to retrieve the tanker Arhon which had been adrift for two weeks off Sable Island. They arrived safely in Halifax January 27, and the ship was eventually towed to Spain for repairs by Irving Miami. In March of the same year Maple took the lead in salvaging the abandoned Dalia D. In the Gulf of St. Lawrence. The ship had taken on a severe list in pack ice, but Maple, assisted by Irving Birch were able to get the ship safely into Gaspé Harbour. 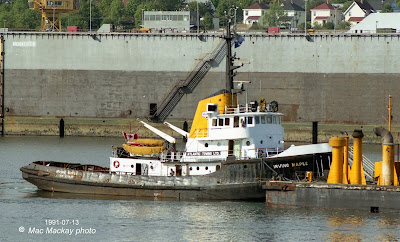 In 1984 she towed the two large Irving tankers H.1060 and H.1070, in tandem, from Point  Edward NS to Spain for scrap, arriving at Castellon July 9.
She also towed the paper barge Kent Carrier and Kent Transport on numerous occasions, up and down the east coast.

When business was slow in the 1980s recession, she was laid up at an anchorage in the Saint John River with Irving Birch and Culver. The fresh water in the river inhibited marine growth during the idle period.
In February 1995 she towed the newly launched Atlantic Spruce (i) from Georgetown PEI to Halifax NS for completion.

With the elimination of tanker barge services and the delivery of new harbour tugs, Atlantic Towing changed the existing tug's names. After working a few years as Atlantic Maple, the tug was laid up at Atlantic Towing’s Indiantown base in Saint John in 2003. Although there was some expectation that she would see service in 2008 she remained mothballed until demolition began in the summer of 2013. 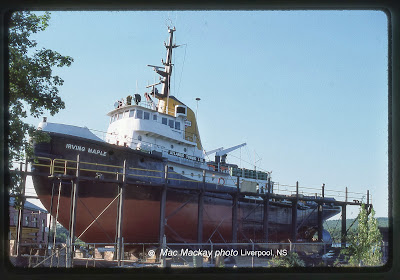 Three McNally tugs in Halifax involved with pier expansions at Fairview Cove and Halifax Shipyard. One new concrete crib, built by McNally, will soon be placed at Fairview Cove to extend the pier. They are currently using Derrick No.3 to place steel sheet piles in the area.
Meanwhile using pier 9c as a base McNally is building cribs for the Halifax Shipyard pier 6 expansion. So far five cribs have been positioned.  Derrick No.1 and the semi-submersible Beaver Neptune are in use along with the previously shown Dexter scows and workboats.
McNally's tug Jamie L seems to be the tug most in use, but Oshawa can also be seen from time to time. Bagotville does not seem to be very busy by comparison.

1. Oshawa gives Jamie L a tow while floating off a concrete crib at pier 9 September 17.


The supplier Sable Sea sailed this afternoon for Portugal. Rumours that she will be scrapped haven't been confirmed, but it seems very likely.


The sale of the ship took place before the announcement that the owners of Secunda, Birch Hill Equity Partners Inc has sold 50 percent of the company to SIEM Offshore of Norway. SIEM has a forty-six ship fleet (including eleven under construction), compared to Secunda's current six ships.
Mostly suppliers, the SIEM fleet also includes some other types of support ships. Among them is the Halifax-built Joides Resolution drill ship.

Return of the Jamie L


McNally Construction's Jamie L has returned to Halifax after several years of work in other locations. It arrived during August with the crane scow Derrick No.1 (built by Canadian Dredge and Dock in  Kingston, ON in 1979).
Now working both at Fairview Cove on the pier extension and at pier 9C with the pier 6 crib work, it can be seen running back and forth to the various locations. Built in 1987 by Navigation Verreault at Méchins, QC for Public Works Canada, it was originally named Baie Ste-Anne, and measured 41 feet overall length,  25 gross tons, and was fitted with engines totaling 470 bhp driving twin screws. In 1996 when PWC decided to get out of the dredging business, the tug was renamed T.1.  It was soon snapped up by Beaver Marine and continued to operate under that name until 1998. By that time the name Baie Ste-Anne had been taken by another vessel, so the tug became Baie Ste-Anne II. In 2005 as Beaver became fully integrated into McNally Construction the tug was renamed again this time as Jamie L.
As built, the tug had a grey hull and white superstructure, and yellow funnels with black cap and red maple leaf. Beaver painted the hull black, then the deckhouse red, leaving the PWC funnels unchanged. In 2005 McNally gave it the green and cream colour scheme that it carries now, but it still carries the red maple leaf - a nice touch revealing its history, and showing a little patriotism too.
Jamie L's near sister tug, built by Ben Livingstone Shipyard in Charlottetown PE in 1987 was called George Bay. Based in Yarmouth, it was transferred to the Canadian Coast Guard by PWC, then sold in 1997 to Navimar Inc of Quebec and renamed Le Taureau. (after a French immigrant ship of 1656-1658 , and translated means "The Bull"). In 1999 Beaver Marine acquired the tug and at that time it was reported to be fitted with two 6 cyl GM 6V92s delivering 660 bhp.
On October 6, 2007, it was on the deck of the crane scow McNally Olympic when they parted a tow line and went ashore near Hebron, Labrador in heavy seas. Both tug and barge were lost, but the towing tug Jerry Newberry made it through. 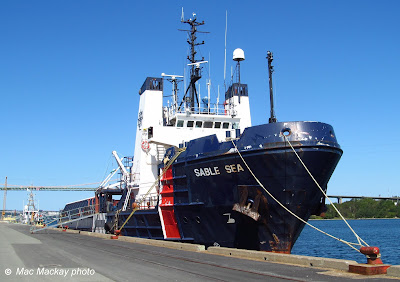 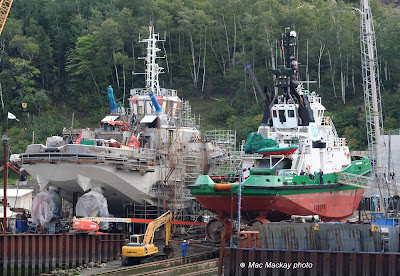 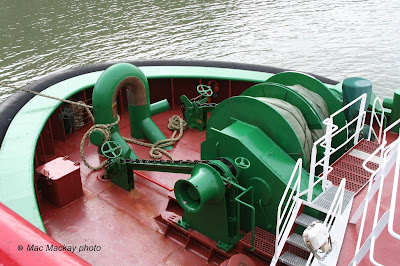 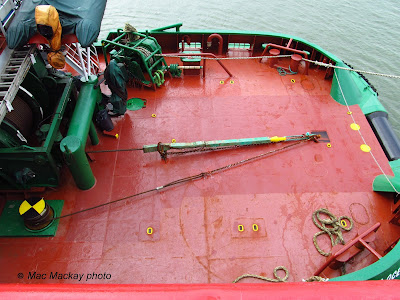