Glen in the Narrows 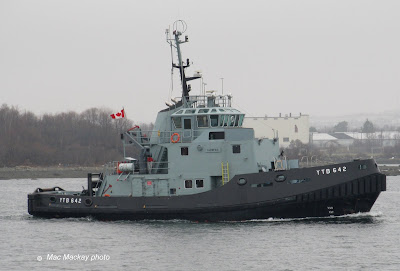 The Canadian navy tug Glenevis drifts down the Narrows this morning on her way back to HMC Dockyard. One of three Voith-Schneider tugs in Halifax, she is operated by the Queen's Harbour Master with a civilian crew.

She was built in 1977 at Georgetown, PEI and has 1,750 bhp. Although beautifully maintained, she is surely due for replacement soon.

With the East Isle shipyard in Georgetown looking for work, and having built scores of tugs, can we expect a political announcement on replacements? Probably not.
Her predecessor, the World War II Glenevis was only 33 years old when it was replaced. The current Glenevis is now 34. 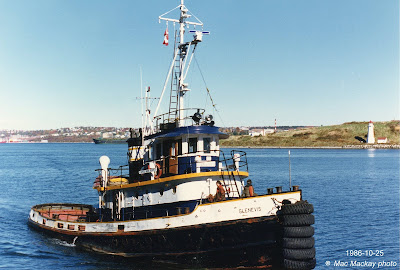 The first Glenevis was sold to McKeil in 1978 and served for several years in her original condition (including this trip to Halifax in the fall of 1986) She survived sinking at her dock in 1991, was rebuilt, repowered and is probably still working. She was sold in 2007 to Caribbean owners.

Out for a spin in the Basin 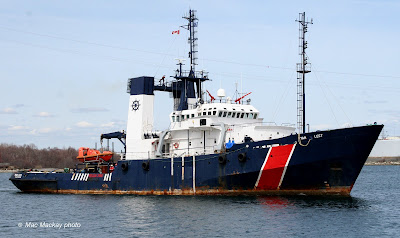 1. Ryan Leet has large davits on her starboard side to accommodate a shipping container for divers or a rescue boat. She is showing a little hull chafe from lying alongside all winter.


Ryan Leet was out for a brief trip to Bedford Basin this morning. This raises hopes that the tug, which has been laid up most of the winter, will return to service soon.

Canada's most attractive tug (and most powerful if you don't include a number of tug/suppliers) has long been a favourite.

Built in 1977 (Lloyd's says 1978) by Beliard-Murdoch in Ostend as Abeille Provence, she and sister Abeille Normandie were stationed on the English Channel as dedicated salvage tugs. As ships grew in size, bigger tugs were brought on and the pair were sold to Venezuela in 1987. They were renamed Salvor Commander and Salvor General, but did not see much action. Secunda Marine picked them up in 1990 and brought them to Canada. They were refitted in Pictou and renamed Ryan Leet and Magdelan Sea.

Originally fitted with SACM engines, Ryan Leet was re-powered in 1995 with two V-20 GM-EMDs, giving 8,850 bhp. She was also fitted with a drop down azimuthing bow thruster of 550 bhp (which can be used to propel the vessel when on standby.)

Magdelan Sea kept her original engines (and had a lot of spare parts from Ryan Leet), but was sold in 2004 becoming Zouros Hellas. She was renamed Tsavliris Hellas in 2007 and has earned her keep as a station salvage vessel, usually in South Africa.

Old favourite, among others at the Strait

Saturday was a fine day for run up to the Strait of Canso to see what might be seen (based on an excellent scouting report from Jim.)
I saw ten tugs in all, among them the usual suspects: Svitzer Bedford, Point Chebucto and Point Valiant at Point Tupper, ready to tend to tankers at Nu -Star. Atlantic Elm with generator running at Port Hawksbury, Gulf Diane in winter layup at Port Hawksbury, and Beaver Gamma at McNally's in Point Tupper. Superport's Wikit at Pirate Harbour, rounded up the that list.

Then came the old favourite and a surprise.
First the old favourite. Now known as Jerry Newberry, I first knew it as Foundation Victor. Built in 1956 (and followed in 1958 by near sister Foundation Valour) they were constructed to work at the new facilities of the Iron Company of Canada in Sept-Iles, QC, but in the summer months only. In winter they would return to Halifax. They also covered off Baie-Comeau, also a summer port. However winter navigation became a reality just as they entered service and they were not built to work in heavy ice. Big (for the time) single screw tugs, powered by a single 8 cyl Fairbanks Morse, putting out a (for those days) respectable 1380 bhp. They became dedicated tugs to Sept-Iles in 1961 when Foundation Vibert was delivered to Baie-Comeau. 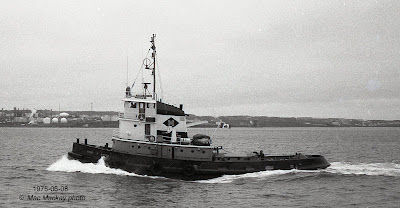 When new tugs were built for Sept-Iles in 1973, Victor and Valour were transferred to Halifax full time and with the move came the ownership of Eastern Canada Towing and the name change to Point Victor and Point Valour. In 1977 the new Pointe-Comeau was delivered to Baie-Comeau and (the now) Point Vibert also came to Halifax. Its twin screw agility displaced Point Victor, which was sold. 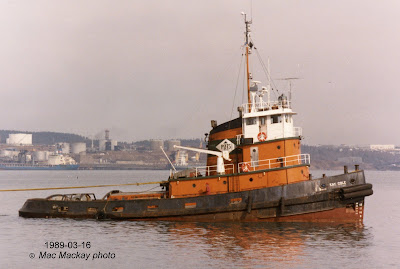 New owners were the C.A.Pitts Construction of Toronto, a marine construction and dredging outfit, later to be called Pitts Engineering Construction Company, which was eventually swallowed up with Foundation and others into what is now Aecon. Pitts renamed the tug Kay Cole, and painted her in their distinctive orange and black colour scheme - relieved somewhat by the white wheelhouse. She ranged far and wide in their employ, working all over the east coast and into Hudson's Bay. 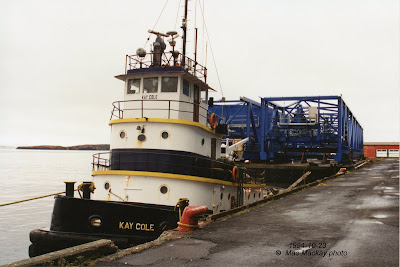 3. Kay Cole, now in McKeil colours alongside in Halifax, with the barge McAllister 252 and a load of steel fabrications for Boston. 1994-10-23

As Pitts evolved and got out of marine work, the tug was bought by McKeil Work Boats of Hamilton, ON. After a short spell, she was renamed Jerry Newberry, and again ranged far and wide with contract towing, reaching the east coast US on more than one occasion.


In 1995 McNally Construction acquired the tug, but because of a symbiotic relationship with McKeil, retained the name. McNally have also kept the tug busy with trips to Labrador and the Ungava region of Northern Quebec.
The tug has been working for the past year delivering plant to Long Harbour, Newfoundland, site of a major new port under construction for Vale Inco's nickel processing facility.

The surprise tug was Kaliutik, built in 1998 by Dovercraft Marine in Nanticoke and Port Dover, ON. It is owned by the Labrador Inuit Development Corporation and works out of the Goose Bay area, with the barge Sappatak carrying quarried stone. The distinctive stone is cut in large blocks and shipped to Italy for processing and sale in the high end European market. 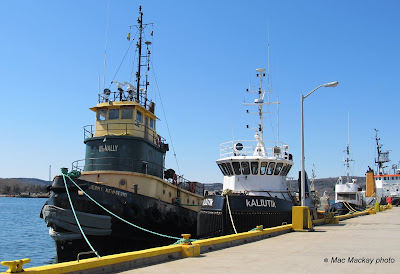 4. Kaliutik was berthed beside Jerry Newberry at Port Hawksbury (with Gulf Diane and Atlantic Elm in the background) and her barge was docked in Mulgrave. 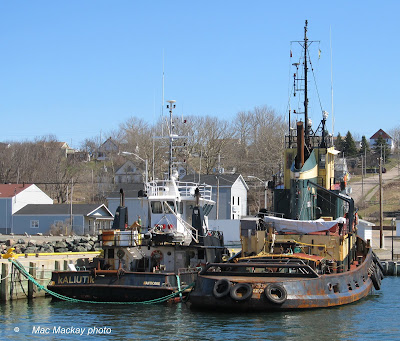 5. A contrast in styles, and the evolution of tug design over 40 years. The twin screw Kaliutik (550 bhp) has a wide stern for barge work, a spacious wheelhouse with winch station and all accommodation above deck. Jerry Newberry has a narrow stern typical of single screw tugs, and has crew berths below deck forward. Her tiny wheelhouse was built before there was a requirement for radar on tugs, and it was a tight fit for an early vacuum tube type. 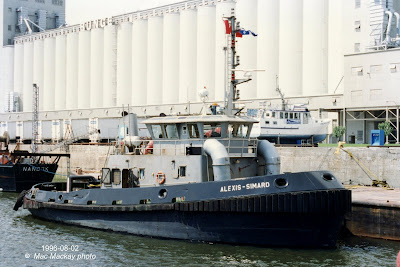 1. Alexis-Simard in Quebec City in 1996. The huge cooling intakes were added in the 1990 rebuild, and replaced intakes mounted much closer to the deck forward of the house. They are visible in the previous posting January 19:

With delivery of Fjord Éternité to Rio Tinto-Alcan at La Baie, the sale of the Alexis-Simard to Groupe Océan has been completed, and the tug is now at Ile-aux-Coudres in refit.

Its new name is Océan A. Simard.

It has been rumoured all along that the tug will be assigned to Toronto/Hamilton operation for Ocean Tugs Ontario, to replace Escorte. That tug remains on the sale list.
Update: On April 21 the tug Ocean Golf was upbound in the Seaway and Escorte was douwenbound on April 25. It is assumed therefore that the Escorte replacement will instead by Ocean Golf.

Spanish Mist to the Magdalen Islands 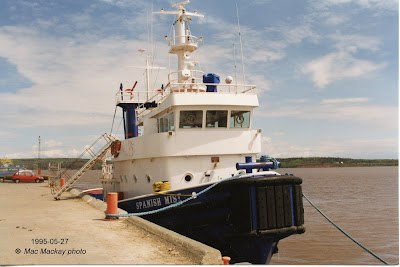 1. Spanish mist at high tide, at the Canadian Keyes Fiber dock in Hantsport. 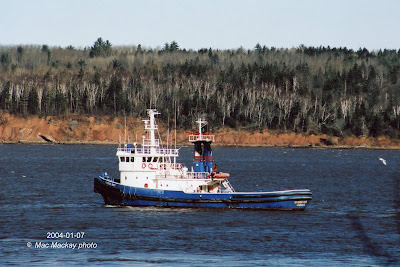 2. Off Hantsport following a ship sailing.
Tugfax reported in October that Spanish Mist was for sale due to the downturn in gypsum shipments from Hantsport.
http://tugfaxblogspotcom.blogspot.com/2010/10/hantsport-tug-for-sale.html

It was later reported that the tug was not for sale.

However, it has apparently been sold. According to Transport Canada's web site, the owner is Les Remorquages I.M. Inc., l'Etang du Nord, QC. Established for some years as owners of smaller tugs, the owners are apparently in need of a larger tug to berth ships loading salt in the Magdalen Islands. For several years they have chartered tugs from McKeil for winter operations, to keep the channel open early and late in the season and to assist in berthing.
They operate the tugs Manuels River (ex Rupert River)(1961.720 bhp) and Poinciana (1957 .550 bhp)

Mining and shipment of gypsum through Hantsport has ceased, due to the reduced demand from the US construction market. The strength of the Canadian dollar against the US (as of today $1 Canadian would buy you $1.04 US) is no doubt a factor as well. As previously reported, if a tug is needed for Hantsport, a tug from Saint John can accompany the ship up the Bay of Fundy to the port. However with no gypsum moving, there will unlikely be any shipping in Hantsport for the foreseeable future.
One bit of irony. Hantsport has the highest tides of any commercial port in the world. There is virtually no tidal movement in the Magdalen Islands. Situated in the middle of the Gulf of St.Lawrence, they are essentially a sand bar created by a large eddy of currents in the Gulf.
.
Posted by Mac at 3:15 PM No comments: 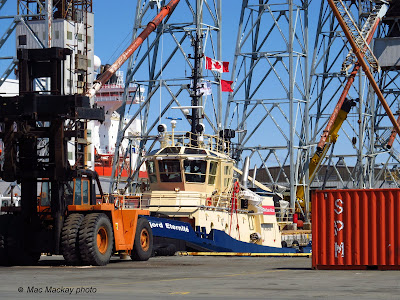 This may be my last photo of Fjord Éternité in Halifax. The AIS site Marine Traffic gives her ETA at La Baie as April 11. That means she will have to leave soon.
Today she took on fuel at pier 28, and is now flying the Rio Tinto-Alcan house flag.
Unfortunately she is so wedged in there, it is impossible for me to get any kind of photo. However there are photos of her alongside on Marine Traffic. Go to Arm Chair Captain, click on her icon and look at all the photos. 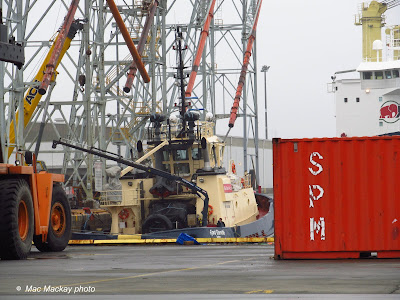 Fjord Éternité was moved by the tug Atlantic Fir to pier 28 on Tuesday afternoon. Men were removing the lifting lugs, as Fairlane approached the adjacent pier 28 to take on her cargo of locomotives.
It should take only a few days to prepare the tug for sea.
Posted by Mac at 9:02 AM No comments:

We Have (had) Lift Off 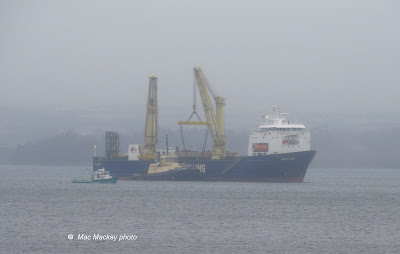 OK, I missed it, but the Fjord Éternité was successfully lifted off about noon today.
Dominion Diving's Halmar stood by, as did Atlantic Fir, for a time.
Atlantic Fir returned later to take the tug to its destination in the harbour.
Posted by Mac at 12:58 PM No comments: 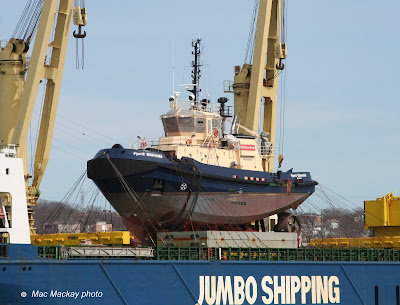 1. Secured in a makeshift cradle of brackets welded to tween deck pontoons, and tied down with numerous wires, the tug appears not to have shifted a bit on the way across. 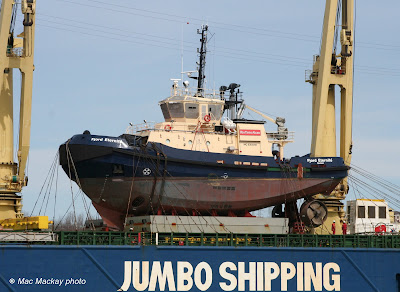 2. Storm shields have been fitted on all the wheelhouse windows and doors, and her ASD thrusters have been turned outboard. The escort skeg and bow thruster can be seen clearly. 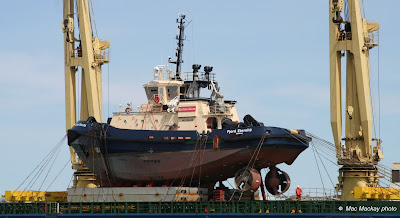 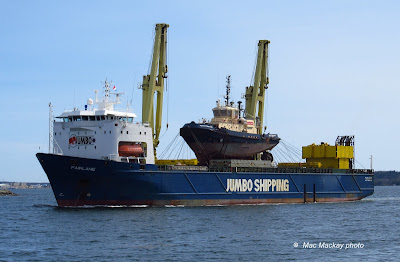 4. The tug Fjord Éternité arrived safely this afternoon after a transatlantic trip aboard the heavy lift ship Fairtlane.

The tug will be offloaded in Bedford Basin, see also photos on Shipfax.
Posted by Mac at 2:29 PM No comments: