Sixty Years On - Part 4 - The Bantugs

Before getting to the core of this series it is necessary to set a bit more of the background. As stated before, the Foundation Company of Canada established itself in Montreal in about 1910, with several pieces of floating plant including crane barges and workboats. In 1935 its subsidiary Foundation Maritime Ltd purchased the Nova Scotia Tug Boat Company and its Halifax waterfront piers. Nova Scotia Tug Boat, which had only been founded in 1934, had a collection of older harbour tugs, most of which were scrapped or sold at the time of the purchase by Foundation. It also owned three new or fairly new steam tugs.

Foundation needed a proper base of operations in Halifax for its salvage tug Foundation Franklin, including warehouse space, machine shop and maintenenace facilities It also needed smaller tugs for its construction business and to handle salvaged ships once they arrived in port. 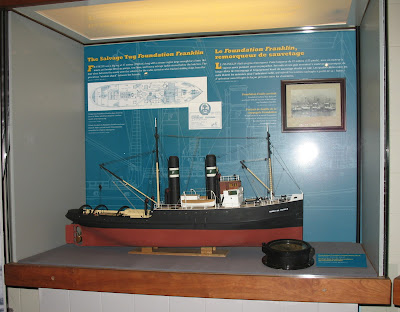 The legendaryFoundation Franklin was the basis for Foundation Maritime's presence in Halifax.

[This is not intended as a full or complete corporate history of the Foundation Company - just some notes on the tugs. Nova Scotia Tug Boat was tied into the Frank M. Ross companies in Montreal and Saint John - see below, but that connection remains murkey and is the subject of ongoing research.] 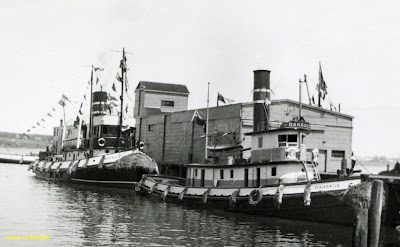 This photo may date from the time of the Foundation takeover of the Nova Scotia Tug Boat Company.
Banscot (left) and Bansaga (right). 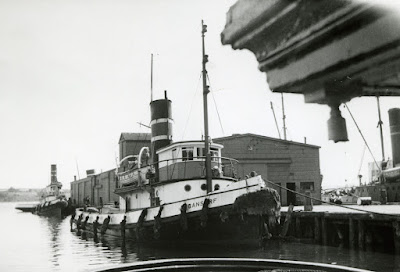 Bansaga at the end of the pier and Bansurf ex Coalopolis with
a bit of Foundation Franklin visible at the far right.

The primary tugs were of course the Banscot and Banshee which were rated at 900 ihp - and were very powerful for their time. The Maritime Museum of the Atlanitc model shows that the Banscot was fitted with RDF and wireless, so was intended for some coastal voyages and salvage assistance for smaller ships. 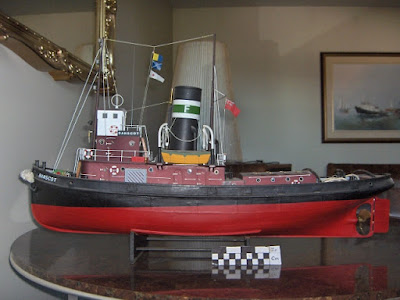 Built very much to the British pattern, the only concession to the Canadian climate appeared to be the enclosed monkey island, which was mentioned in the first post and established a feature that was continued for decades. There were several sister tugs, two of which also came to Canada in 1934, but were based in Montreal and operated for Frank M.Ross who controlled Canadian Vickers, Ross Towing and Salvage and SinmacLines (Sincennes-McNaughton Tugs Ltd.) and Saint John Shipbuilding + Drydock. He was also associated withe Playfair and Wolvin interests. The tugs were called Bon Secours and Bon Voyage and were sold to Russia in 1940.
Not showing on the model - the tugs were reinforced for work in ice. Bow frames were doubled and the hull was sheathed in oak at the waterline.
With the outbreak of World War II activity in the Port of Halifax increased dramatically as it became the gathering point for convoys. Many of the ships loaded their cargo in Halifax, and had to be shifted from pier to pier or to anchorages, and harbour tugs were in constant deamand. Many of the ships damaged in conflict or by weather and collisions also came to Halifax for repairs. Foundation Maritime salvaged many of those ships but there were others too.
As Farley Mowat recounted in Grey Seas Under [now available for on line reading through https://archive.org/ ] Foundation cobbled together a collection of whatever tugs they could find for harbour work. Many were worn out already and did not last long. They were patched together temporarily and when the war ended they were scrapped or scuttled.
During World War II the Allies built huge fleets of tugs for harbour and seagoing work. Many were not completed until late in the war and were declared surplus on completion and were sold off over the next few years. There were also large numbers of diesel engines built for war use but no longer needed which were also sold off.
Foundation upgraded is salvage and coastal towing fleet. Foundation Frances was the former US Navy tug ATR 19, a wooden hulled steamer, but the salvage fleet is the subject of another series of posts, sometime in the future. 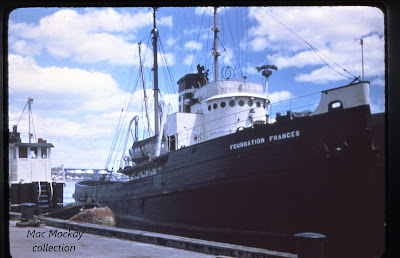 The Foundation Frances at the salvage pier with Banstar or Bansun alongside the tug dock, equipped with its rope "pudding" or bow fender. 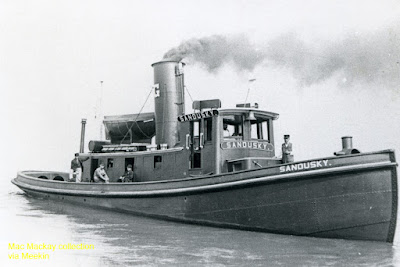 In its pre Foundation days, the steam tug Sandusky, built in 1912, worked for the huge "G Tug" fleet of Great Lakes Towing. Intended for work in fresh water its steam plant was non-condensing, and drew lake water for its boiler. Once it came to salt water service it had to stop frequently to take on fresh water, as salt water would fill the boiler tubes with scale.

As soon as diesel engines were available Foundation re-powered the Sandusky. Renamed Banstar it was a sister tug to Bansun ex Waukegan which was similarly converted.

Foundation also acquired several Glen class tugs, built orginally for naval dockyard use, they were 350 bhp to 400 bhp (and maybe 600 bhp on a good day) with limited coastal range.

They were put to use as harbour tugs in Halifax in the winter, but in summer they were transferred to Baie-Comeau and Port Alfred.

Foundation also acquired a large 1000 ihp steam tug, which they renamed Foundation Vera. [The "V" series names began with this tug, named for the manager's wife, but later to denote Victory for the Allies in World War II. The Foundation Victor and Valour were the first to make direct reference to wartime.] 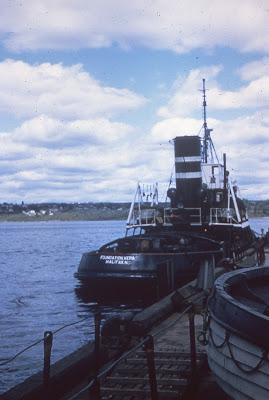 Built in 1945 by Midland Shipbuilding + Engineering as the standard tug Rockhill it became the Maritime Guardian from 1945 to 1948 until bought by Foundation. Although ten years newer than the Banscot it was very similar, and performed duties as a  harbour tug in Halifax and did coastal towing and salvage work.

By 1960 however, it was apparent that these relics were no longer suitable for the job. Steam tugs were inefficient and the 350 to 400 bhp diesels were not powerful enough. (On one arrival of the Queen Mary in Halifax in 1953 it took six tugs to get the ship alongside.) 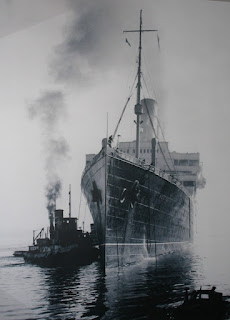 It was not unusual to require four tugs or more for other big passenger liners such as the Aquitania.

New diesel tugs were obviously needed. Experience with the Foundation Victor, Foundation Valour and Foundation Vibert must have played some part in the selection of the new design, and it is also likely that Davie Shipbuilding's experience with their new Quebec harbour tugs also came into play. (CSL owned both Davie and Quebec Tugs) 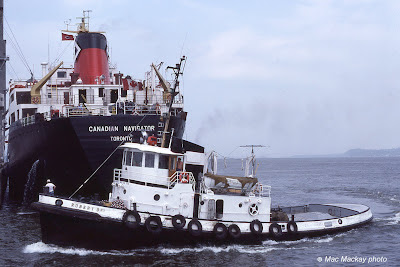 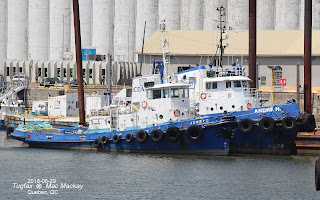